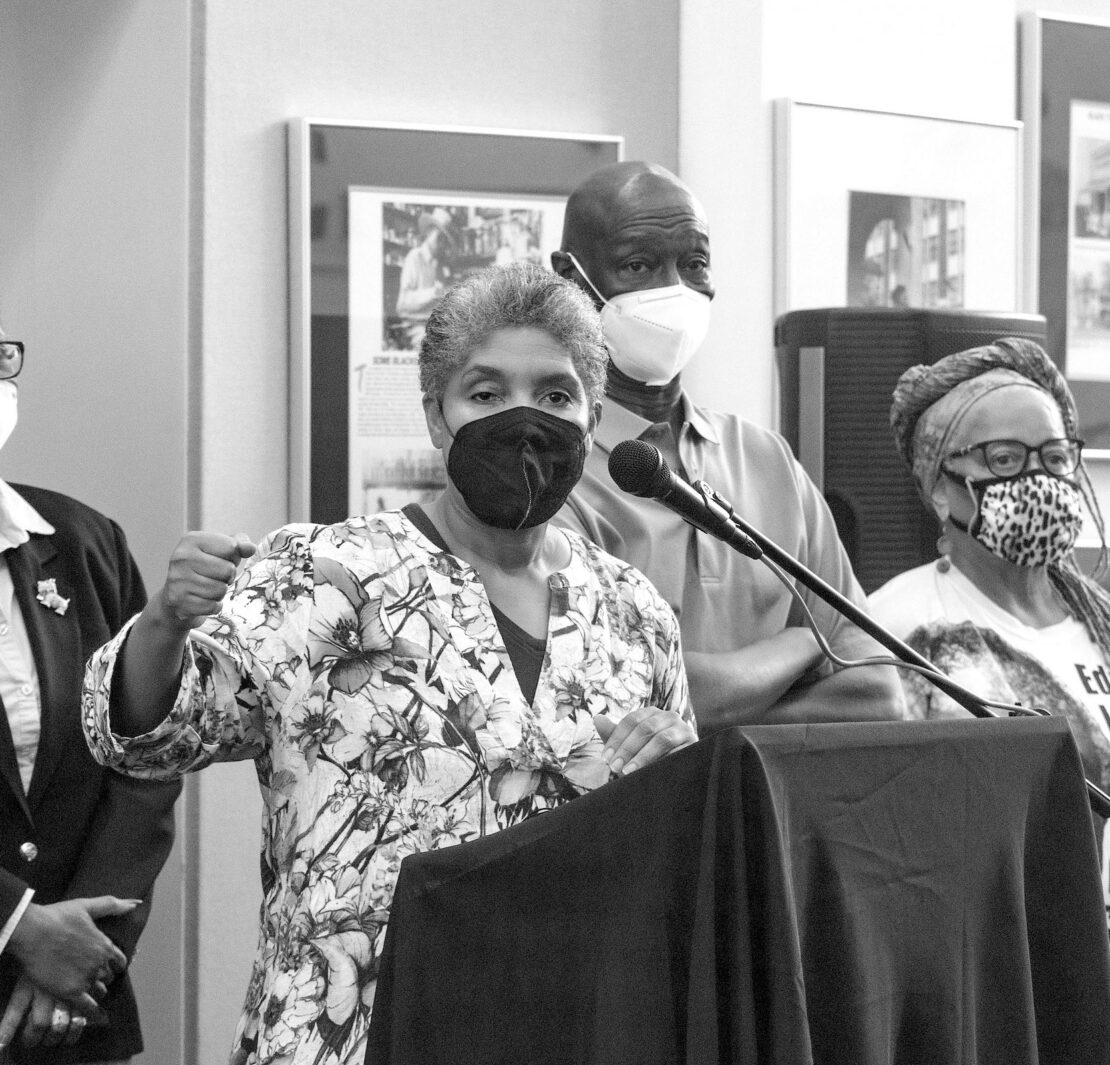 Critical Race Theory:  Why it still matters in Oklahoma

Some of Oklahoma’s top Black lawmakers and educators have contradicted a complaint from a white Memorial High School biology teacher that a training course Tulsa Public Schools gave teachers violated any of the state’s new laws that “shame white people for past offenses in history.”

They called on the Oklahoma State Board of Education to rescind a recommendation to downgrade the accreditation rating for the state’s second largest school district based on the complaint that lacks merit.

Led by State Rep. Regina Goodwin, who has been hawkish with the state over passage of the controversial House Bill 1775, the leaders held a press conference on July 22, at the Greenwood Cultural Center.

The teacher, who has been on the faculty at Memorial since 2017, filed the complaint with the Oklahoma State Department of Education earlier this year, saying that “mandatory” compliance courses on racial bias offered to her and other teachers breached H. B. 1775.  The statute, signed into law by Gov. Kevin Stitt on May 7, 2021, prohibits public school teachers from teaching that “one race or sex is inherently superior to another.”

In her complaint to the State Department of Education, obtained by the Oklahoma Eagle, the teacher wrote: “I am being told by Tulsa Public Schools administrators that I must complete a mandatory set of 3 compliance courses through Vector Solutions – Vector Training, K-12 Edition. ‘The 2nd compliance course contains a section that includes statements that specifically shame white people for past offenses in history, and state that all are implicitly racially biased by nature.”

State officials have withheld the teacher’s name, but sources have identified her as Amy Cook, a biology instructor. (See related story)

News reports have alleged that Cook told a Muslim student they would be going to hell and that she tried to have a prayer wall at the school.  Earlier this year, Facebook users called her a bigot in post on Memorial’s official school page.

Cook also announced she was running as a Republican for State Senate District 34, which encompasses most of her “beloved hometown of Owasso,” earlier this year. “As a school teacher and a mother I see everyday the progressive liberal attack that is trying to tear down our children,” she said on her official campaign website. “The spiritual damage, brainwashing, and political indoctrination must be stopped. Our voices must be heard and we cannot remain silent!”

She withdrew from the race on April 19.

Vote on accreditation this week

The Oklahoma State Board of Education is scheduled to meet Thursday, July 28, to consider a recommendation that Tulsa Schools be downgraded to a category of “accreditation with deficiency” as a result of the teacher’s complaint. In a June 23 meeting, Brad Clark, the board’s general counsel, recommended downgrading TPS’s status.

Members of Tulsa’s Black community, mobilized by Goodwin and including School Board Member Dr. Jennettie Marshall, Tulsa City Councilor Vanessa Hall-Harper used the July 22, press conference to underline that Oklahoma education officials have offered no information to the public that the training cited in the complaint violated any state law. They were also joined by State Sen. George Young of Oklahoma City.

Goodwin, who said she has been investigating the complaint, said that the state Board of Education sent her a copy of the 18-minute presentation created by the Florida-based company, Vector Solutions, and presented to Tulsa’s teachers in February.

Goodwin said that no material she has seen demonstrates proof that H. B. 1775 was violated.

“I see no evidence that any law was broken,” she Goodwin. “And therefore, we call on the Board of Education to not take any action against Tulsa Schools.

“The board should show the public evidence as to why the presentation would lead them to downgrade TPS’s accreditation. They should be transparent. They should not take action if they cannot show how the course violated any law.”

Goodwin further derided H. B. 1775, which she and other Oklahoma Democratic lawmakers opposed, as a “trash bill.”

“It’s legislation passed by a group of white men who are trying to tell us how we should teach concepts about race, and how we should control emotions,” she added. “I question its constitutionally.”

In a correspondence to Oklahoma State Education Board officials earlier this year, Tulsa Superintendent Dr. Deborah Gist also flatly rejected charges that the course constituted a breach of H. B. 1775.

In a statement to News 2 Oklahoma on July 22, Tulsa Public Schools re-affirmed Gist’s rejection of the teacher’s complaint.

“Parents of children in Tulsa have been clear,” the statement read. “They want us to focus on their child’s educational success and the joy of learning. Our children must be able to engage, learn, play, study, explore, and share with their friends and teachers without politicians and other adults in Oklahoma inserting politics–from the left or the right–into our schools.

“In Tulsa, we have a commitment to every child, and we want every family–no matter their income, race, religion, partisan affiliation, or any other difference–to know that they are welcomed and supported by our schools. In fact, we believe that diversity of background, culture, and beliefs is what makes us strong and makes public schools so important to a healthy community.

Our superintendent’s response to all of this is: ‘Knock it off. We need to focus on serving Tulsa kids.'”

Marshall, who represents North Tulsa on the seven-member school board, concurred with Goodwin. “To impugn the Tulsa Public Schools District with a downgrade based on something you have not proven is something I have problems with,” Marshall said. “If we, as a district, are to be punished, where is the proof? I want to see the beef in this matter.”

Goodwin and others in the community stressed how the white teacher’s complaint negatively affects the teaching in Tulsa Public Schools.

According to Goodwin, the teacher who filed the complaint has a highly controversial history. Goodwin said that she had been embroiled in various incidents at the school, and even white students have called for her dismissal.

Joyce Smith Williams, an African American advocate for education in Tulsa, told the press conference that she questioned the teacher’s fitness to teach in a diverse classroom. She said she’s uncomfortable with the teacher playing a role in educating her grandson, a Memorial student, and other kids at the school.  Smith is affiliated with Citizens United For a Better Educational Future (C.U.B.E.S), a North Tulsa group devoted to bolstering education in Tulsa schools.

“It troubles me that my grandson could be exposed to someone who is so narrow-minded that they don’t want to know about his history or culture.”

Cindy Driver, a North Tulsa activist and retired school teacher, concurred with Smith Williams. “It’s important that those of us who are educators are exposed to anything that would make us better teachers,” Driver said.

How to watch the state board meeting

WHAT: State Board Of Education meeting on Tulsa Public School accreditation

The Oklahoma Eagle was the first local media outlet to receive a copy of the complaint filed by the Memorial High School teacher through an open records request with the Oklahoma Department of Education. For our latest coverage on this case, visit TheOklahomaEagle.net.