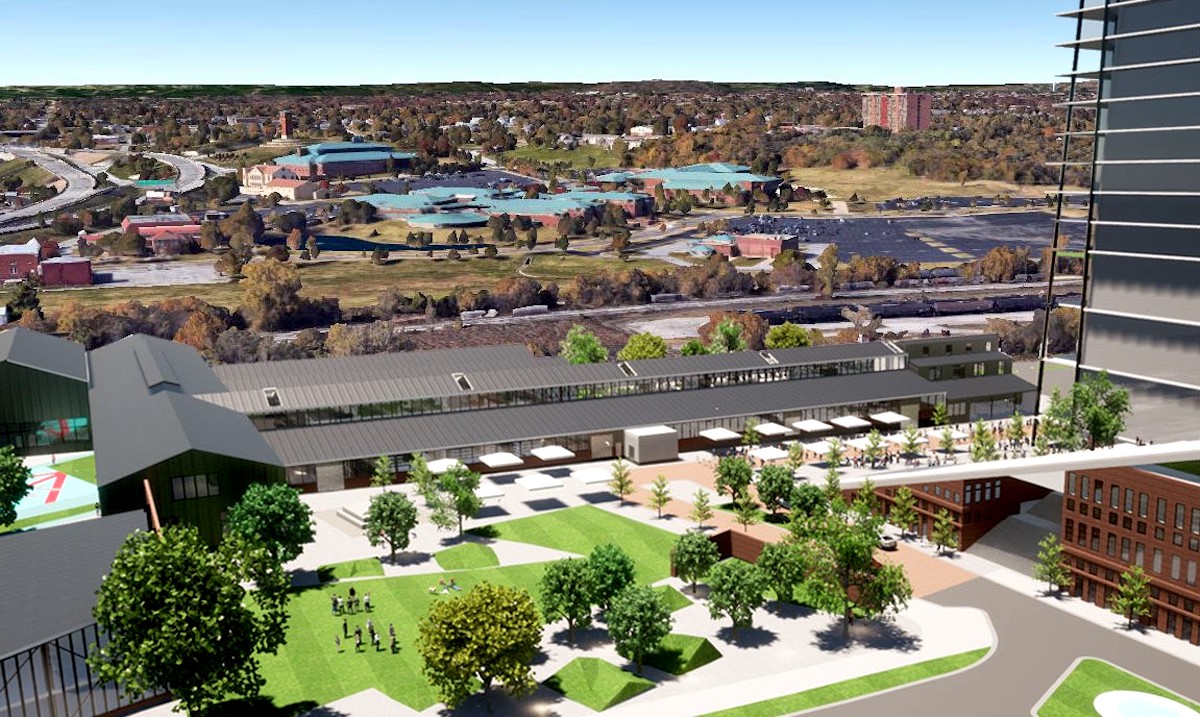 The massive Evans-Fintube complex, which has sat dormant for years in the center of Greenwood District, is on the verge of a significant overhaul that promises to bring a new look, aura, and dynamism to the neighborhood.

Earlier this month, the City of Tulsa announced that Team Alchemy had been selected to overhaul the 22 acre landscape, located just off the corner of Archer and Greenwood.

Team Alchemy is led by Franchell Abdalla’s Be Good Development and JE Dunn/JE Dunn Capital Partners and includes many other local, state, and national architects, engineers, and preservation specialists. They have devised a blueprint to transform the defunct Evans Fintube space – also called Oklahoma Ironworks — into a massive mixed-use residential and business complex that includes constructing a 42-story high building. It would be the first skyscraper built in Tulsa since 1979. The complex could take up to five years to complete, but parts will come online in earlier phases. The Team Alchemy plan is estimated to cost $225 million eventually.

Beyond rebuilding the old Evans Fintube structure, the vision the winning master development team has for the project is focused on creating new spaces and opportunities for Black Tulsans to work in, live in, and ultimately own parts of the facility.

“People in North Tulsa should know that this is a project for them,” Abdalla said in an interview with the Oklahoma Eagle. “It was designed with the people who live and work and come from Tulsa in mind. It’s for Massacre descendants and others who are part of the community.”

The Steering Committee Made The Choice

Senior Director of Engagement for Impact Tulsa Ashley Phillippsen and other names familiar to North Tulsans.

Philippsen, co-chair of the Evans Fintube Steering Committee, said Team Alchemy’s proposed renovation would create “maker space, office, and incubator facilities to support the growth of the next generation of entrepreneurs and businesses that will rebuild Black Wall Street. We look forward to seeing the impact the transformation of this historic building in the coming years will have in increasing wealth, economic opportunity, and community cohesion in Greenwood and North Tulsa.

When the city first opened bidding for the project last year, over two dozen developers expressed interest. Tulsa Authority for Economic Opportunity (TAEO) leaders and the steering committee devoted a year of public and private meetings to scrutinizing the plans developers presented. According to Kian Kamas, executive director of TAEO, they used various criteria to analyze the proposals put forward, including financial capability and long-term potential.

North Tulsans Contributed To The Process

Kamas said one major factor the Steering Committee and TAEO used was how well the developers embraced the needs and interests that the Black community in Greenwood and Greater North Tulsa expressed for the project.

During the public meetings, the developers bidding for the project also solicited feedback from the Greenwood and greater North Tulsa community on the priorities for developing the complex. Kamas underlined that Team Alchemy was selected partly because its plan most closely responded to the criteria Black Tulsans expressed, including engaging Black contractors in the construction, opening opportunities for Blacks to own land and businesses, and preserving the Greenwood heritage.

Team Alchemy seemed to consistently embrace feedback from the community and align it with their proposal, Kamas and other Steering Committee members said.

Abdalla said that Team Alchemy is committed to making Black people a central part of the development. She said that the team is currently 67 percent people of color, and 80 percent of that group is Black. “We want that concentration to grow. We are searching for others to bring into the process.”

The selection of Team Alchemy is the start of an extensive development process. The next step is for the developers to meet with TAEO executives and other Tulsa city officials to work out the financing, construction, and timeline issues. Those meetings will likely continue into 2023.

Once that is done, Alchemy plans to readapt the Oklahoma Iron Works building into a space celebrating the spirit of Greenwood’s entrepreneurship.  The former industrial building will be renovated to provide a hub for all types of entrepreneurs. Abdalla said she hopes construction will kick off sometime in 2023.

Beyond resuscitating the Iron Works Building, the initial construction phase calls for building constructing work-play-stay units on the south end of the property, negotiating for the removal of the WATCO rail yard on the west side of the site. It will also involve and establishing a Community Land Trust.

Abdalla and her team are committed to building The Beacon, the 42-story, a mixed-use structure that is one of the highlighted proposals in Phase 2 of the development. The building could potentially include rooftop dining, a hotel, a performance theater, studio space, first-floor retail, and mixed-income multifamily housing.

Abdalla views the Evans Fintube project as a catalyst for a renaissance in construction in North Tulsa. “What has been lacking so far is the infusion of capital into the community,” she said. “We think this project will inspire others to commit capital to the community. North Tulsa is a great community bursting with talent. We hope to help make it flourish.”