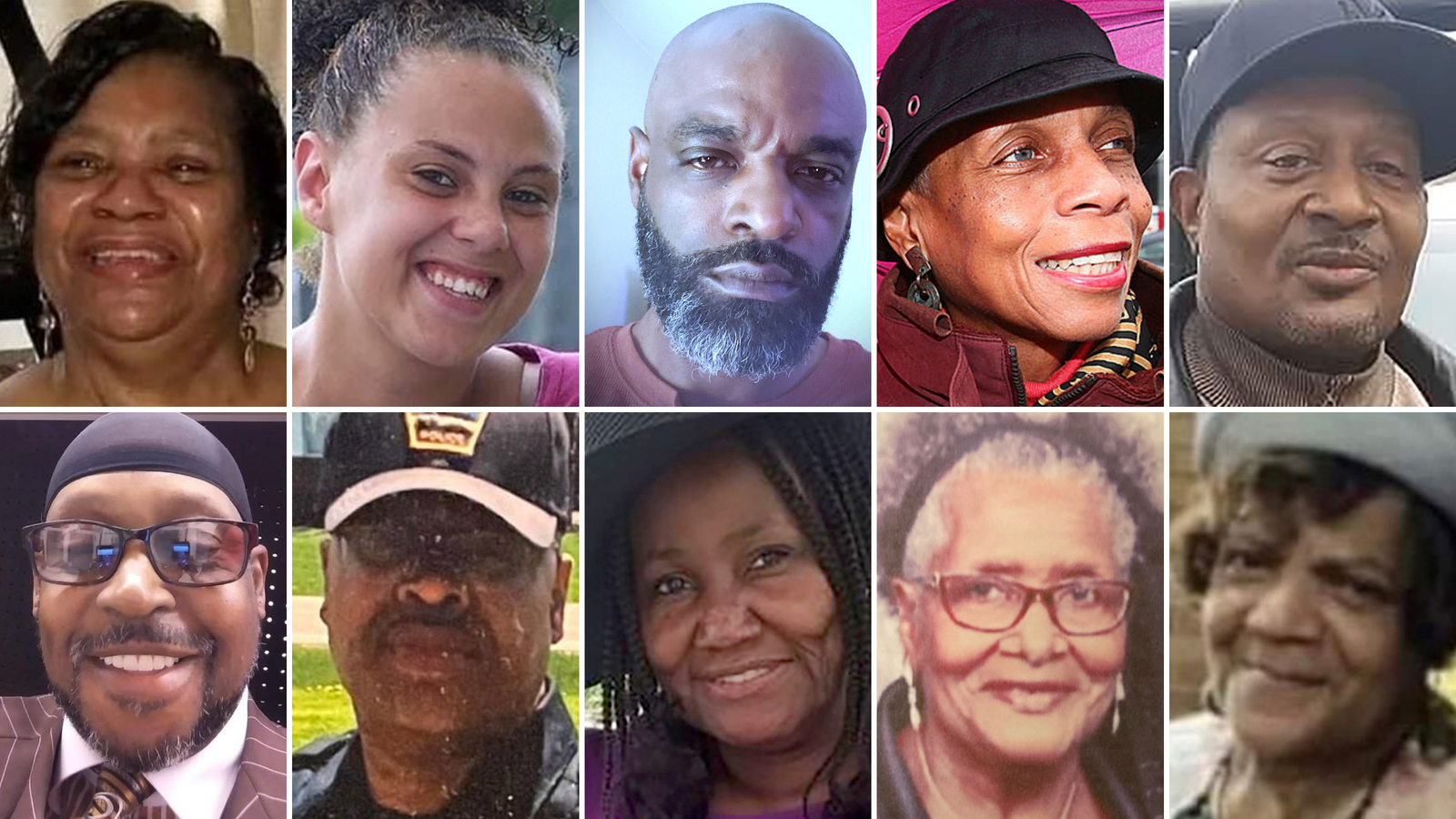 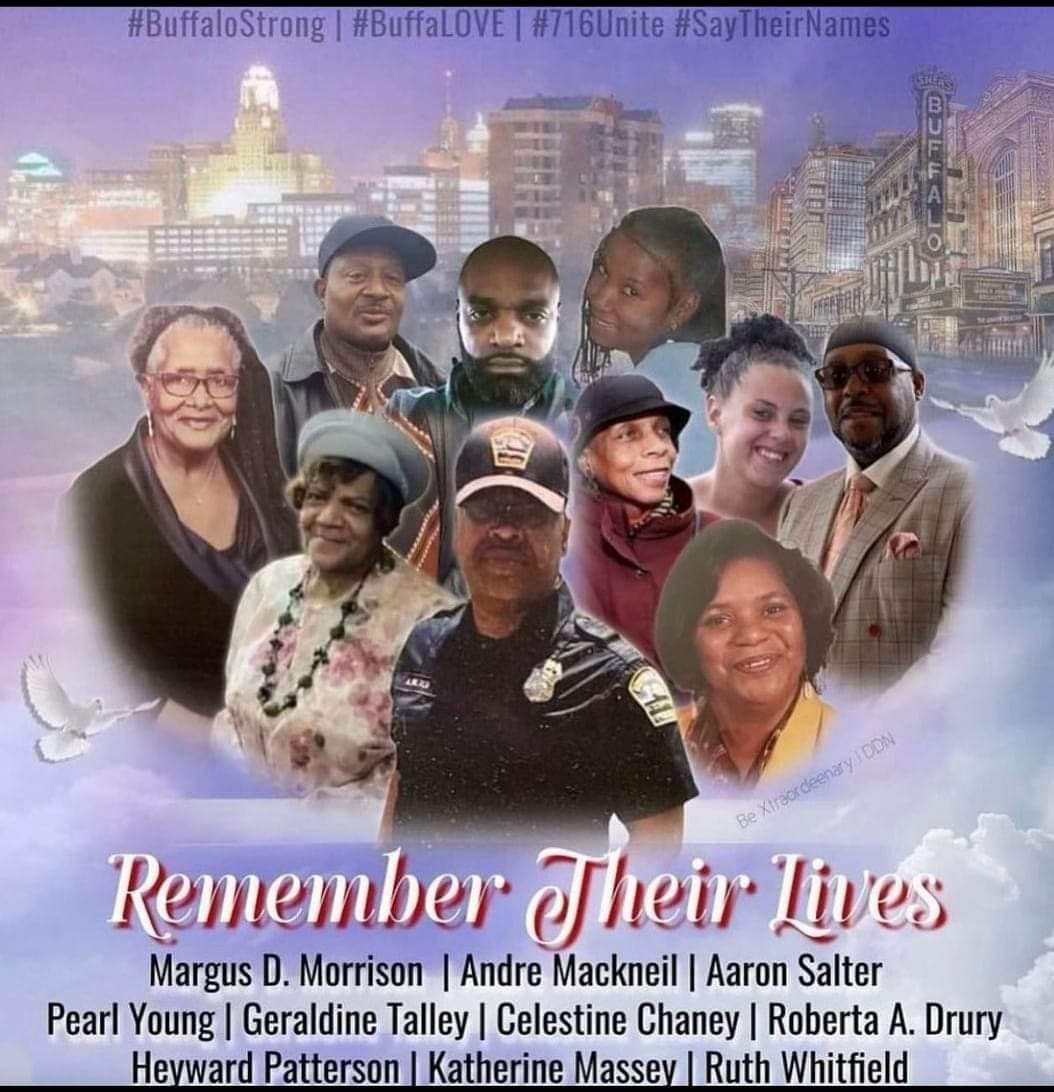 President Joe Biden said that racist ideology circulated on the internet had inspired a man who perpetrated a mass shooting in Buffalo over the weekend, calling on Americans to reject White supremacy and politicians and media figures who promote it.

“I condemn those who spread the lie for power, for political gain and for profit,” Biden said in Buffalo on Tuesday after meeting with families of victims of the attack, which killed 10 and wounded three. Eleven of the victims were Black, and the alleged shooter is White.

“White supremacy is a poison. It’s a poison, through — it really is — running through our body politic, and it’s been allowed to fester and grow right in front of our eyes,” Biden said.

The massacre at a supermarket in a mostly Black neighborhood on Saturday is being investigated as a racially-motivated hate crime. Biden called it “terrorism.” The attack has renewed calls among congressional Democrats for stricter gun control legislation and stronger hate-crime laws, and has prompted infighting within the Republican Party over the violent and racially polarizing language some of its leaders and media stars use in public messaging.

Biden called the shooting “violence inflicted in the service of hate and the vicious thirst for power to find one group of people inherently inferior to any other group.

“A hate that, through the media and politics, the internet, has radicalized angry, alienated, lost, and isolated individuals into falsely believing that they will be replaced,” he said. “That’s the word, ‘replaced’ by the other.”

Biden later told reporters that “anybody who echoes replacement theory is to blame – not for this particular crime – but it serves no purpose, no purpose except profit and/or political benefit. And it’s wrong, it’s simply wrong.”

Representative Liz Cheney, a Wyoming Republican, accused her party’s leadership of enabling “white nationalism, white supremacy and antisemitism” after the shooting and demanded they root it out.

Representative Adam Kinzinger, an Illinois Republican, accused Representative Elise Stefanik of New York, who replaced Cheney as the No. 3 House Republican a year ago, of pushing a belief known as “white replacement theory,” which posits that Democratic elites seek to dis-empower White Americans.

Kinzinger cited a Stefanik ad posted on Facebook showing images of migrants crossing the border over the text: “Radical Democrats are planning their most aggressive move yet: a PERMANENT ELECTION INSURRECTION.”

Stefanik senior adviser Alex DeGrasse on Monday said that any attempt “to blame the heinous shooting in Buffalo on the congresswoman is a new disgusting low for the Left, their Never Trump allies, and the sycophant stenographers in the media.”

Kinzinger and Cheney are the only Republicans on the House committee investigating the January 6, 2021, insurrection at the Capitol instigated by former President Donald Trump. The Republican National Committee censured them for their participation.

Capitol Hill action on such intractable, divisive issues as guns or White nationalist extremism is highly unlikely with midterm elections just months away.

That leaves Biden with little to offer in the way of policy changes to yet another community in mourning from racist violence. The visit comes as the president grapples with daunting challenges — inflation, record-high gasoline prices, a shortage of baby formula and an overall increase in violent crime — that have Democrats poised for a wipe-out in the November election.

The Notorious B.I.G. Comes Back To Life In Hyperrealistic Metaverse World ‘The Brook’

The shooting has caused blowback for some conservative lawmakers, candidates and commentators who’ve espoused versions of the “replacement theory” that apparently inspired the alleged gunman, an 18-year-old White man identified as Payton Gendron.

He reportedly wrote in a manifesto that shoppers at the supermarket came from a culture seeking to “ethnically replace my own people.” Authorities have not yet confirmed the authenticity of the manifesto.

The suspect spoke explicitly about his plans to commit a terrorist act on the popular chat app Discord since at least last December, according to logs of his posts reviewed by Bloomberg.

“No more,” Biden said. “We need to say as clearly and forcefully as we can that the ideology of White supremacy has no place in America.”

Democrats have repeatedly tried and failed to enact new gun-control measures — such as universal background checks and an assault weapons ban — in the decade since a gunman killed 26 people, most of them first-graders, at the Sandy Hook elementary school in Newtown, Connecticut.

Efforts to advance bipartisan background-check legislation sputtered last year in the evenly divided Senate, even after a mass shooting that targeted Asian-owned businesses in the Atlanta area.

The inaction has led Biden to resort to executive measures, which are limited in scope, to address the problem.

The president last month announced a rule to crack down on the manufacture and sale of so-called “ghost guns” that are homemade and lack serial numbers, making them hard to trace.

Biden nominated Steven Dettelbach to lead the Bureau of Alcohol, Tobacco, Firearms and Explosives. The former federal prosecutor would be the first permanent agency chief since 2015, if confirmed by the Senate.

“We can keep assault weapons off our streets. We’ve done it before,” he said Tuesday.

For the entire article go to: www.bloomberg.com