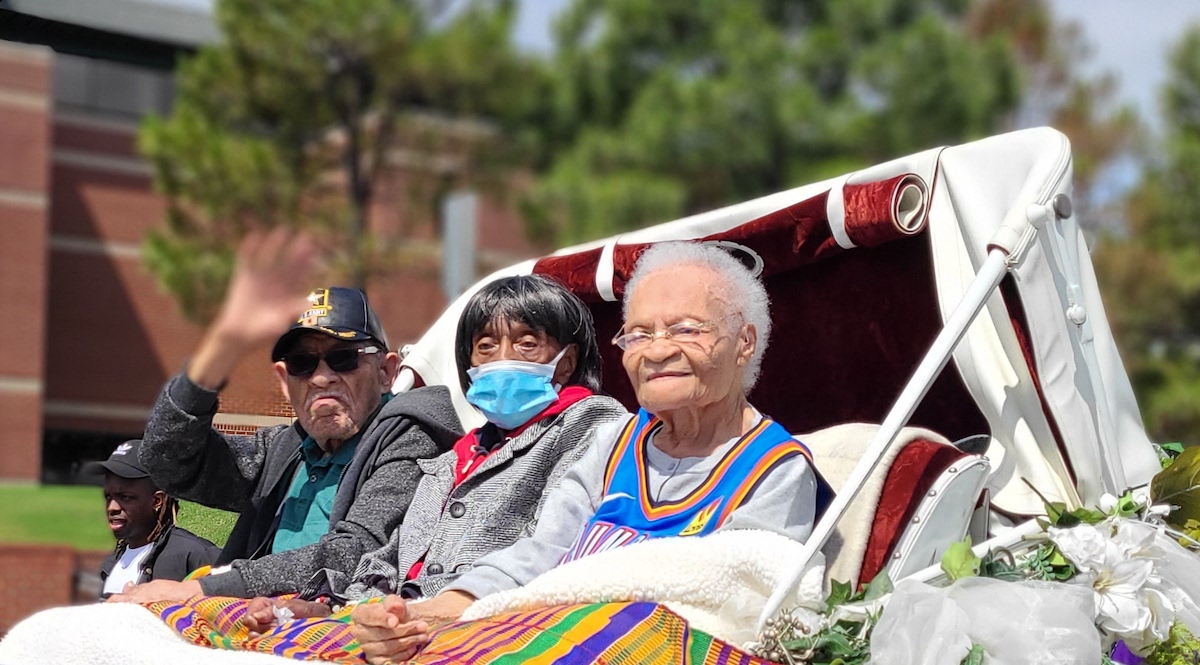 Ed and Lisa Mitzen, founders of the New York-based nonprofit Business for Good Foundation (BGF), will present a $1 million shared gift this week to the three known living survivors of the 1921 Tulsa Race Massacre.

The Mitzens – a Saratoga Springs, New York couple who are entrepreneurs and philanthropists – will give the monetary gift Wednesday in a meeting at the Greenwood Cultural Center with massacre survivors Viola Ford Fletcher, 108, Lessie Benningfield Randle, 107, and Fletcher’s brother, Hughes Van Ellis, 101. The Mitzens said they will bring several members of their foundation to meet the survivors and their relatives and tour the Historic Greenwood District.

Ed Mitzens said they were inspired to grant the $1 million after reading an article in The Washington Post by staff writer and Oklahoma native DeNeen L. Brown about the survivors’ plight. Brown has written extensively about the race massacre – including the recent legal victory when Tulsa County District Judge Caroline Wall ruled that the survivors’ court case against the city of Tulsa and other defendants could proceed.

After reading her coverage, Ed Mitzen said he contacted Brown to inform her that he and his wife wanted to make a monetary contribution to Fletcher, Randle and Van Ellis.

‘Excellent People in the World’

At first, the survivors were skeptical when they received news of the donation by the Mitzens, but they were reassured that it was true.

“They feel incredibly blessed and grateful,” Ike Howard, Fletcher’s grandson and a spokesman for the survivors, said in an interview with the Eagle. “And so do I.”

“‘There are some excellent people in the world,’” Van Ellis told Ike when he shared the news. “‘A change is coming, and it’s wonderful.’”

Ed Mitzen said the survivors’ stories, combined with their resilience is inspiring and deserving of continued recognition.

“We were incredibly touched by the story of people who were able to move forward from unfathomable tragedy with very little help from anyone,” Ed Mitzen said in an interview with the Oklahoma Eagle. “And so, we decided if we can help them a little, we should.”

Brown said she contacted State Rep. Regina Goodwin to see whether she could facilitate the transaction. Goodwin has been a stalwart advocate for the survivors and often represents them with groups or individuals wanting to help them.

Goodwin is a product of the Historic Greenwood District and a descendant of race massacre victims. She helped organize for the survivors’ to travel to Ghana in August. Only Fletcher and her brother Ellis were able to travel.

She also assisted in facilitating a $600,000 donation from the Tulsa-based Transformation Church to the survivors in June 2021. Each survivors received $200,000.

After conversations with Mitzen, Goodwin enlisted Tulsa S.T.E.P.S. (Serving To Empower People Successfully) Foundation Inc., a 501(c)(3) organization, to help with the engagement as was previously done with fundraising efforts for the survivors. Tulsa S.T.E.P.S. acts as a go-between for donors and individuals and will have no monetary gain from the Mitzens’ gift.

Foundation president Lanetta Lyons said their nonprofit is overwhelmingly appreciative to continue to be involved in such a worthy project on behalf of the survivors.

“We are really grateful to be able to assist with this transaction,” Lyons told the Oklahoma Eagle. “This recognition for the survivors is great and very much deserved.”

Part of the Massacre story

“The pursuit of justice for the Race Massacre has been part of my agenda for years,” Goodwin said. “I am engaged in it in part to honor my ancestors. But we have three living people who endured that tragedy, and if I can do something to bring comfort to them at this stage of their lives, I will do it.”

The gift is the latest chapter in the survivor’s powerful narrative. It is also part of a larger story of the people who have been motivated by their plight and the plight of the descendants of the race massacre.

The violence started on May 31-June 1, 1921, when a white mob destroyed much of the Greenwood community, which led to an unknown number of deaths, with estimates ranging as high as 300.

Fletcher, Randle and Van Ellis were children during the deadly attack and are the only known three survivors. In their pursuit of justice, they filed a lawsuit in September 2020. It claims the city, the county, the Oklahoma National Guard and other officials caused “public nuisances” in 1921 when they did not defend the Black community from a murderous white mob that decimated Greenwood. City officials have declined to comment on the lawsuit. The defendants sought to have the case dismissed. Judge Wall ruled against the dismissal.

The survivors have sought reparations through the courts before. In 2005, the U.S. Supreme Court declined to hear a reparations case appeal after federal courts ruled that the statute of limitations had expired. Dozens of survivors stood dejected outside the Supreme Court after that ruling.

The current lawsuit identifies seven entities or organizations that it alleges were directly involved in the massacre, including the city, county, state National Guard and Tulsa Chamber of Commerce.

The story moved Judge Wall so the point that she granted the survivor’s case to go forward.

Brown, a native of Oklahoma City who has reported on the survivor’s saga for years for both the Post and National Geographic, wrote about the decision as to the latest chapter.

Brown’s work so touched the Mitzens that they said they knew they had to do something.

“Here were people who had to go to court to prove that they could go to court to correct an injustice,” Ed Mitzen said. “That tells you something about our system.”

Brown said she was pleasantly surprised that her story elicited such an action by the Mitzens.

“A good story can change the world, change people and change institutions,” Brown said in an interview with the Eagle. “I am thrilled that the Mitzens felt compelled to make this gift after reading the story.”

The Mitzens story is also remarkable. Ed Mitzen, the founder of three businesses, has had a wildly successful career in the health care market, according to the Albany (N.Y.) Times Union.  The success provided the Mitzens with the means to go into philanthropy. Their nonprofit Business for Good – which they launched in July – is the vehicle for the Mitzens to pursue their philanthropic causes.

The Mitzens’ said their philosophy is to achieve social change through business. The target of charitable giving is food insecurity, housing instability, and education inequity.

Ed Mitzen has been inspired by the story of his father, who died when he was 43 and Mitzen was 18. “I realize that we don’t have that much time on earth,” he said. “For whatever time I have left, I want to do as much good as I can.”

Ed Mitzen is a renowned healthcare marketing entrepreneur, who has built three businesses totaling more than a combined $500 million in revenue. His current company, Fingerpaint, has been on the Inc. 5000 List of America’s Fastest-Growing Private Companies for the last eight years.

The Mitzens said their pledge to the race massacre survivors advances their mission to do good. The commitment is even more remarkable given that neither his wife nor have any ties either to Oklahoma or to the victims.

“My hope is that through this gesture, the survivors know that somebody somewhere cares about them and what they endured,” he said.

Like many Americans, Mitzen only learned about the story of the race massacre a few years ago through news reports. Recently, he has educated himself more thoroughly about the Historic Greenwood District and Black Wall Street.  He views his upcoming visit to Greenwood as part of a process of getting to know the community.

He is open to other opportunities in the North Tulsa community to help other entrepreneurs.

Mitzen also hopes that his actions will spur others to reach out and help Tulsa’s Black community. “Many people with resources want to help but don’t know how to,” Mitzen told the Eagle. “Maybe my actions will encourage other white guys to help.”

Before Tulsa and the race massacre survivors, Mitzen was already deeply engaged in his mission to do good mostly around the area around Saratoga Springs, New York, where he lives. BFG, his nonprofit, bought the Bread Basket Bakery and turned it into a nonprofit. Proceeds go to fight food insecurity in his region. The foundation has also purchased Hattie’s Restaurant and Chicken Shack, a well-known eatery in Saratoga Springs.