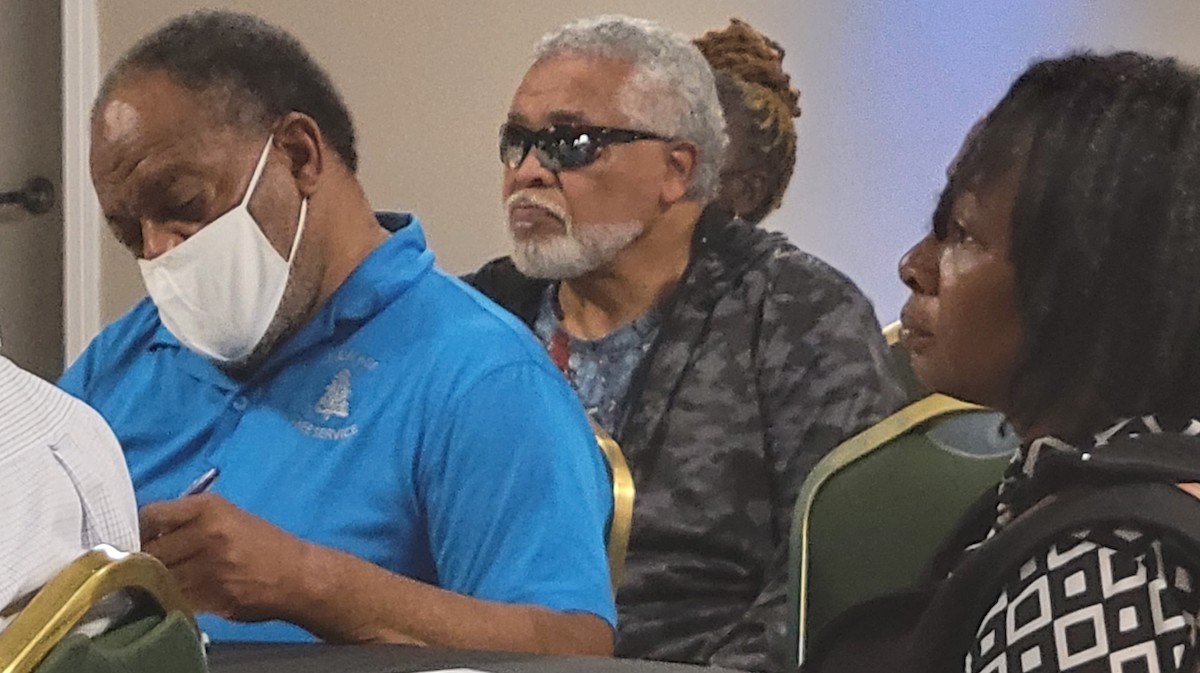 The Things That We Tell Ourselves: “Uncle Tom”

By GARY LEE AND RUSSELL LACOUR

Two teams of commercial real estate developers this week offered their visions of how to bring new life to the dilapidated Evans Fintube complex in the historic Greenwood neighborhood.

Representatives of Team Alchemy and Team Greenwood Phoenix – the two groups on the shortlist to rebuild the complex– used a gathering Wednesday night at the 36th Street Event Center to try to persuade the crowd of mostly North Tulsans that theirs was the project that most reflected the wishes that Northsiders have expressed for the site.

And yet, the two proposals could hardly be more different.

Vernon Marrow, President, and CEO of E Smith Legacy – one of the companies that make up Greenwood Phoenix told the gathering that construction of their vision would start with a sports complex and a hotel — to drive people to the site. Under their proposal, the Evans building — also known as the Oklahoma Iron Works Building, would be demolished. He said other aspects of the plan – such as residential housing – would come later.

Team Alchemy’s proposed development centers around a 42-story mixed-use commercial building and tower on the north end of the property called The Beacon.

The structure would include a hotel, a performance hall, retail space, and rooftop dining.

Alchemy’s plan also calls for recreating the Evans building into a co-working and retail space.

In making their pitches, representatives of the two teams were adamant that their concepts directly responded to expressed interests of the Greenwood community – and residents of Greater North Tulsa. The rebuilding of the Evans Fintube site is projected to take at least five years and cost over $200 million. As one of the most significant construction endeavors ever pursued in the Greenwood footprint, the project is one on which the Greenwood and Greater North Tulsa communities have a strong take. It is widely viewed as a potential opportunity for North Tulsans to regain the land and the lost potential to build wealth taken from it in the 1921 Tulsa Race Massacre and afterward.

‘This is your project,” said Franchell Abdalla, leader of Team Alchemy, after presenting her group’s concept. “We are simply implementing it. We are ensuring that the opportunity is not just stated anymore that it is executed.”

“This was crafted with your voice.”

Smith is the former running back for the Dallas Cowboys. Smith’s company, E Smith Legacy of Dallas, is part of the Greenwood Phoenix development team.

Vernon Marrow, President of E Smith Legacy, said, “I think we spoke to community need — wealth creation. This is a wealth creation tool for the folks that had it snatched 100 years ago.”

“I’m not from this community,” Smith added later in an interview with the Oklahoma Eagle. “But my heart beats for the community. This is a reminder of what we once lost, that vision is looking up trying to build a monument to history to give it back to those who lost.”

“The community wants what it wants.,” he continued. “We are charged with how to get it paid for, try to come up with a plan, and how to underwrite it.

“It’s about jobs, equity, building up the culture, and a monument to the legacy of what we lost,” he said.

The Tulsa Authority for Economic Development (TAED) put out a call for developers to present proposals for the Evans Fintube complex. Beginning last fall, TAED sponsored three community meetings to garner feedback from the Greenwood and North Tulsa Communities about the plans. Greg Robinson, President of Standpipe Strategies, and Charles Harper and Demali Wilson, executives of World Won Development, have organized the meetings.

During the meetings, North Tulsa’s Black Community members voiced their views on what should be done at the Evans Fintube site. Three of the most consistent and most vital views expressed were that 1) Black Northsiders should be given opportunities for ownership in the new site, 2) Black construction teams be given preference in the development of the site, and 3) they should give

The leadership of TAED and a 15-member Evans Finstube steering committee, appointed by Mayor G.T. Bynum, scored the various proposals. Earlier this year, they narrowed the candidates for developing the site to the two teams who presented proposals on Wednesday.

The steering committee and the TAED leadership are expected to score the two teams’ latest presentations and decide on the contractor by early May. Kian Kamas, Executive Director of TAED, told Wednesday night’s gathering that the final plans might eventually be adapted based on market conditions and negotiations regardless of who wins the project.

Some of the audience members in Wednesday night’s meeting voiced concerns about TAED’s process of selecting a developer.

“I am just here to tell you — we are not playing right now,” Kandy Whitley-White said. “The community is tired. We are tired of the city of Tulsa bringing fake community-engagement processes to us and watering it down to (two teams) that you have literally preselected and feeding them back to us and expecting us to accept them as our own. We are not accepting that.”

Another woman in the audience told the meeting organizers, “we don’t want another stadium in the Greenwood area, and we don’t want a 42-story tower there either.” The position between the city and North Tulsa is not a parent-child relationship, she said. “We know what we want and don’t want.” She urged the leaders to go back to the drawing board.

Others voiced concerns about the city’s sincerity in reaching out to the North Tulsa community. For example, community members who could not attend Wednesday’s meeting were encouraged to join virtually. Dozens of North Tulsans – and others — tried to participate by Zoom. But the Zoom connection broke down early and was never restored.