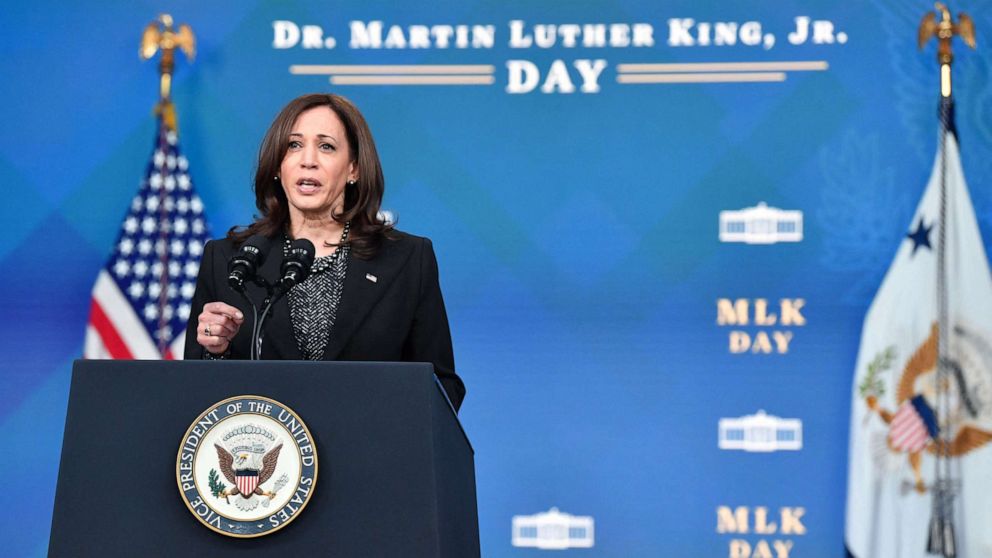 On Monday, as the world commemorated the enduring legacy of the late Dr. Martin Luther King, Jr., Vice President Kamala Harris used the occasion to call attention to voting rights. King motivated the masses to fight for the right to vote. Today, that civil right continues to be challenged.

“We must not give up and we must not give in. To truly honor the legacy of the man we celebrate today, we must continue to fight for the freedom to vote, for freedom for all,” Harris said virtually at an event hosted by Ebenezer Baptist Church in Atlanta, Georgia.

The Biden-Harris administration has not minced words when addressing the voting rights legislation currently held up in the U.S. Senate. Last week President Biden called for an end to the filibuster in order to pass the John Lewis Voting Rights Act. “The United States Supreme Court, in recent years, has weakened the Voting Rights Act,” Biden said during a speech in Atlanta. “And now the defeated former president and his supporters use the Big Lie about the 2020 election to fuel torrent and torment and anti-voting laws—new laws designed to suppress your vote, to subvert our elections.”

Over the last year, more than a dozen states have passed voting laws that would create obstacles for eligible American citizens to cast their ballots. Democrats have been aggressive in fighting these measures, highlighting the fact that Black Americans, are often the ones affected by these controversial acts. But while Democrats in the House were able to pass the legislation drafted to combat the restrictive laws, the measure is lacking the necessary support needed to become law.