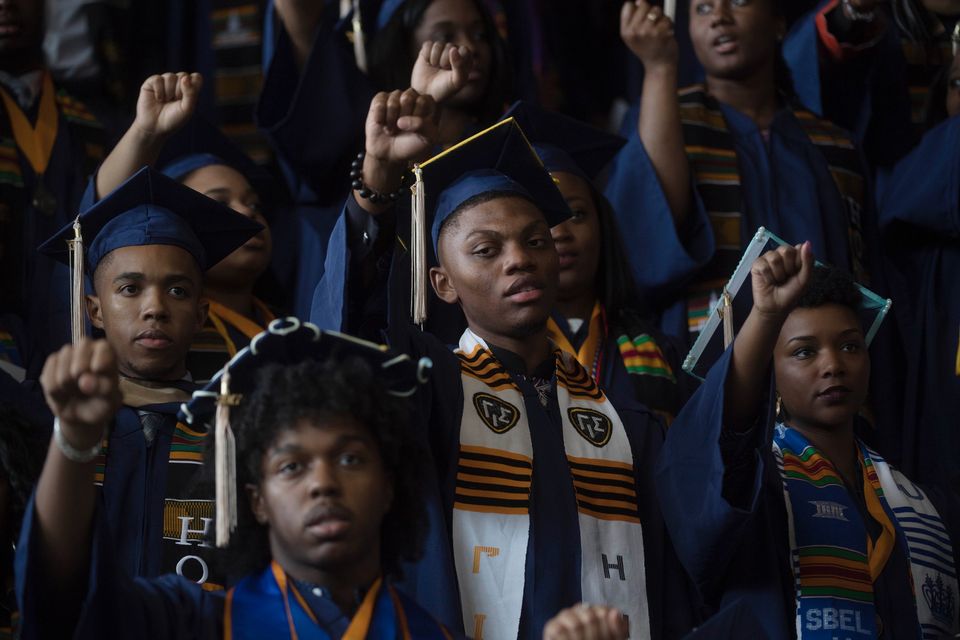 Lusia Harris, The Only Woman Drafted By The NBA, Dead At Age 66

In 2020, in the wake of George Floyd’s murder in Minneapolis, Lift Every Voice and Sing was played before the season opener of every pro football game.

Some people call it an anthem. Others say it’s a hymn. One Baptist minister likened it to a Biblical psalm. It’s a lamentation, but also a celebration. It describes a despairing past, but also hope for the future.

Lift Every Voice and Sing was originally a poem, written in 1900 by James Weldon Johnson, who would go on to become a writer, lyricist and civil rights activist. Only later did his brother J. Rosamond Johnson put it to music.

Johnson had started out intending it to be a paean to Abraham Lincoln on what would have been the 90th anniversary of his birth. But, influenced by the times — brutal racial oppression and violence that followed the end to post-Civil War Reconstruction, and the Supreme Court’s notorious separate-but-equal ruling in 1896* — it evolved into something else. A cry from the heart. A plea for the strength to stay the course when things looked grim for Black citizens.

“I got my first line — Lift every voice and sing. Not a startling line, but I worked along grinding out the next five,” Weldon Johnson wrote years later in his autobiography. “When, near the end of the first stanza, there came to me the lines Sing a song full of the faith that the dark past has taught us/Sing a song full of the hope that the present has brought us the spirit of the poem had taken hold of me.”

The next year, it was performed for the first time by 500 children at the all-Black Jacksonville, Florida school on the occasion of a visit by Booker T. Washington.

“The schoolchildren of Jacksonville kept singing it,” Johnson recalled three decades later. “They went off to other schools and sang it; they became teachers and taught it to other children.”

It quickly caught on with Black civic groups and spread across the country. It became a ritual of Emancipation Day celebrations (once a major national event among Black Americans, marking the day Lincoln signed the Emancipation Proclamation). The lyrics were published in the burgeoning Black newspapers, of which there were more than a thousand then.

It became known as The Negro National Anthem. It’s still called that though it’s more commonly referred to now as the Black National Anthem. One-hundred-twenty-two years since it was penned, it retains an emotionally powerful, almost mystical connection to Black America, but also to many White Americans, as well.

“I learned it at church,” Regina Miller commented on Facebook. “We would sing it during Black History Month and on MLK Jr. Day. It’s a part of our culture. It reminds us of how far we have come, and what it took to get here.”

“When choirs sing this song, you hear the pride swell as they go through the verses,” wrote Pamela Walker. “You feel the words of James Weldon Johnson just as he meant for us to do.”

What is it about this song that stirs such strong emotions?

“Lift Every Voice and Sing is a song of endurance, lament and supplication,” wrote Imani Perry, a Princeton University African-American Studies professor, in her book about its history, May Forever We Stand. “It has had remarkable longevity due to both its beauty and its vision. Perhaps, most important., it was and is the song of a people, my people.”

Reverend James McKnight of the Congregational Church of Christian Fellowship in Los Angeles wrote in an email, “Certain important themes rise out of the lyrics. One theme is togetherness. Notice the words that have the power to cause the listener to feel a part of a beloved community (“every,” “us,” “our,” “we”). Another theme is strength. Notice the acknowledgement of the difficulties of our past (“stony the road,” “bitter the chastening rod,” “weary,” “tears”). The pain of our past is real and rough, yet because we are strong and because our God is strong and ever present, we have progressed.”

In 1920 (some accounts say 1919), the NAACP adopted it as its official song, and it continued to sweep the nation. For decades to follow, it was sung at church, protests, family gatherings, graduations and social and political organization meetings. During the Second World War, it took on a new significance, often belted out as an affirmation of Black support — notwithstanding discrimination at home and the U.S. military being strictly segregated — for the war against tyranny. It was one of the theme songs of the early Civil Rights Movement. Martin Luther King, Jr., sang it often and sometimes invoked its lyrics in speeches.

The first time Rev. Ervin Trollinger of Calvary Baptist Church of White Plains, N.Y., heard it was when he was a high school student. It had an impact that has never waned. He makes sure it is performed every year on the Sunday before Martin Luther King Day, and every Sunday during Black History Month in February.

“You will see at the end of it,” he told me, “I put my hand on my heart and begin to tap my heart when the part says ‘True to our God. True to our native land.’ I always touch my heart.”

The late Congressman and Civil Rights leader, John Lewis, was nine-years-old growing up in rural Alabama when he came across it in a magazine.

“In my nine-year-old mind, my reason for clipping the three stanzas was twofold: I liked the way it read, and it was written by a Black man. I didn’t, however, understand in those early years what the words would some day mean to me and Black America.”

Professor Perry said the song’s popularity faded some in the late 1980’s and 1990’s. It has since had a revival. You can find many versions of it online, even a hip-hop interpretation. I listened to more than a dozen just the past few days. John Legend’s acapella rendition is especially moving. So is jazz saxophonist Charles Lloyd’s instrumental version.

In 2020, in the wake of George Floyd’s murder in Minneapolis, Lift Every Voice and Sing was played before the season opener of every pro football game. A video of Alicia Keys singing it was broadcast before last year’s Super Bowl.

And Rep. James Clyburn (D-S.C.) has proposed making the song the national hymn.

More than a century after James Weldon Johnson wrote it, Lift Every Voice and Sing endures. In his autobiography, he recounted the emotional catharsis as the words came to him.

“I could not keep back the tears and made no effort to do so,” he said. “I was experiencing the transports of the poet’s ecstasy, feverish ecstasy was followed by that contentment — that sense of serene joy — which makes artistic creation the most complete of all human experiences.”

Here are the lyrics to Lift Every Heart and Sing:

Lift every voice and sing

Till earth and heaven ring,

Ring with the harmonies of Liberty;

High as the listening skies,

Let it resound loud as the rolling seas.

Sing a song full of the faith that the dark past has taught us,

Sing a song full of the hope that the present has brought us,

Facing the rising sun of our new day begun,

Let us march on till victory is won

Stony the road we trod,

Felt in the days when hope unborn had died;

Yet with a steady beat,

Have not our weary feet

Come to the place for which our fathers sighed?

We have come over a way that with tears has been watered,

We have come treading our path through the blood of the slaughtered,

Out from the gloomy past,

Till now we stand at last

Where the white gleam of our bright star is cast.

God of our weary years,

God of our silent tears,

Thou who hast brought us thus far on the way;

Led us into the light.

Keep us forever in the path, we pray.

Lest our feet stray from the places, our God where we met Thee,

Lost our hearts, drunk with the wine of the world, we forget Thee,

Shadowed beneath Thy hand,

May we forever stand,

True to our God

True to our native land.