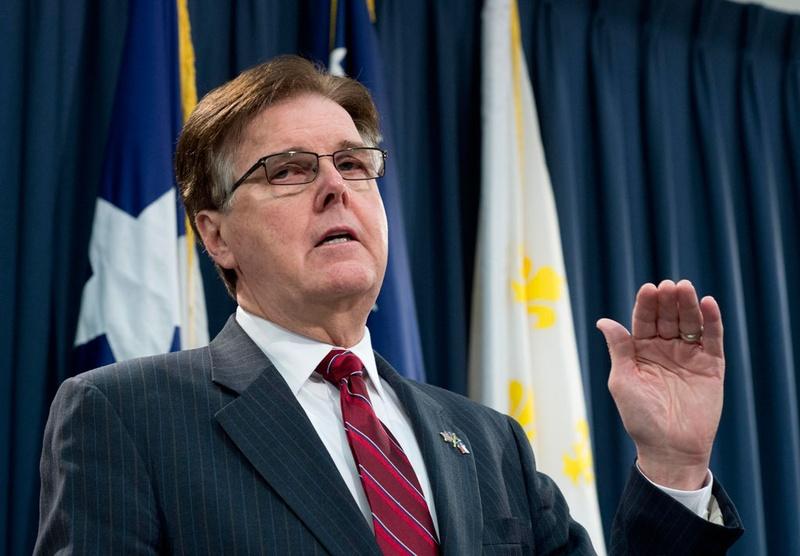 When Texas Lt. Gov. Dan Patrick was asked about the surge in coronavirus cases during a Thursday night appearance on Fox News, the Republican said “African Americans who have not been vaccinated” are “the biggest group in most states” contributing to the spike.

Laura Ingraham had asked Patrick to respond to criticism from Democrats that covid-19 cases and deaths were on the rise in Texas due to Republican Gov. Greg Abbott’s policies. The governor has resisted public health mandates aimed at mitigating the highly contagious delta variant’s spread and announced on Tuesday that he had tested positive for the virus despite being fully vaccinated.

Patrick acknowledged that “covid is spreading” and that infections are largely among people who have not received the vaccine.

“Democrats like to blame Republicans on that,” Patrick said. “Well, the biggest group in most states are African Americans who have not been vaccinated. The last time I checked, over 90% of them vote for Democrats in their major cities and major counties.”

Patrick’s comments, one video clip of which had been viewed more than 845,000 times on Twitter as of early Friday morning, drew immediate criticism, with some calling the lieutenant governor’s assertion unfounded. His office did not respond to a request for comment late on Thursday.

The latest data from the Texas Department of State Health Services shows that the African American population there is not driving the increase in cases. Black residents in Texas accounted for 16.4% of the state’s cases and 10.2% of deaths as of Aug. 13. While vaccination rates are low among Black Texans, the highest coronavirus case rates are among Whites and Hispanics, who make up 34.9% and 35.8% of the state’s cases respectively, according to the latest data.

“Making a statement that casts blame on a racial or ethnic minority for the spread of disease is a well-known racist trope that predates most of us,” Jorge Caballero, a former instructor at the Stanford University School of Medicine who is now working as health data scientist, told The Washington Post. “People are already getting hurt by this virus, and it makes absolutely no sense for us to add insult to injury.”

About 46% of Texans are fully vaccinated, according to The Post’s tracking. The nationwide rate is about 51%.

Dr. Fauci Sounds The Alarm For Black Americans To Get Boosted, Continue To Get Vaxxed

The Texas Tribune reported this month that Black Texans hold the lowest vaccination rates among racial groups statewide, at 28%. For that population, the paper noted, a “lack of trust” in health care can be common based on generations of disparities in the American system.

Hispanics and White conservatives in rural areas also have low vaccine rates in Texas, according to the Tribune.

Covid-19 cases there have risen 17% in the last week, and deaths are up nearly 60%, according to The Post’s coronavirus tracker. Meanwhile, Abbott has sought to ban mask mandates, and tensions continue to play out. At one Texas school, a superintendent detailed instances of parents verbally and physically assaulting educators over masks, including one parent pulling off a teacher’s face covering.

The day before Abbott announced his positive coronavirus diagnosis, videos posted online show the governor delivering remarks and interacting with a maskless crowd at an indoor event. Earlier this month, the Texas Department of State Health Services requested five mortuary trailers in anticipation of a possible surge in deaths related to the state’s ongoing spike, driven by the highly transmissible delta variant.

“Whether we’re talking about a deep red or deep blue state, we really need all of our leaders to actually focus on the problem and to stop trying to score political points,” Caballero said. “Because we are our own worst enemy at the moment – and the delta variant is just having a field day with us.”