Up to 22 acres of prime land are on the cusp of being developed at 36th Street North and Martin Luther King Jr. Boulevard that addresses several long-standing challenges. Tulsa native Antoine Harris along with company Alfresco Development are making major plans for Tulsa North with a $75 million project that includes a hotel – aptly named The Stradford21 Hotel – and two mixed-use retail buildings at the historic intersection.

The city of Tulsa, in a dramatic reversal of past actions, has approved a $16 million tax increment finance district to help the African American developer absorb the development costs. Along with the Oasis Fresh Market grocery store, this marks as a continuing sign that quality businesses can locate in Black Tulsa and succeed.

There was concern that the Osage Casino would not succeed and has in fact been a great success for the Osages and their Tulsa North neighbors. The Osages continue to expand their crown jewel, and it provides jobs and commerce for the area. The additional hotel rooms will help everyone, including downtown Tulsa in their search for tourism conventions.

Visitors to Greenwood Rising can stay at the new hotels and others being built near Black Wall Street. The boutique-style Stradford21, named for pioneering businessman J.B. Stradford, who owned a hotel that was burned to the ground during the 1921 Tulsa Race Massacre. 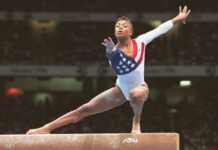 Opinion: Dominique Dawes: As A Three-Time Olympic Gymnast, I Aplaud Simone Biles — And Know The Weight On Her Shoulders