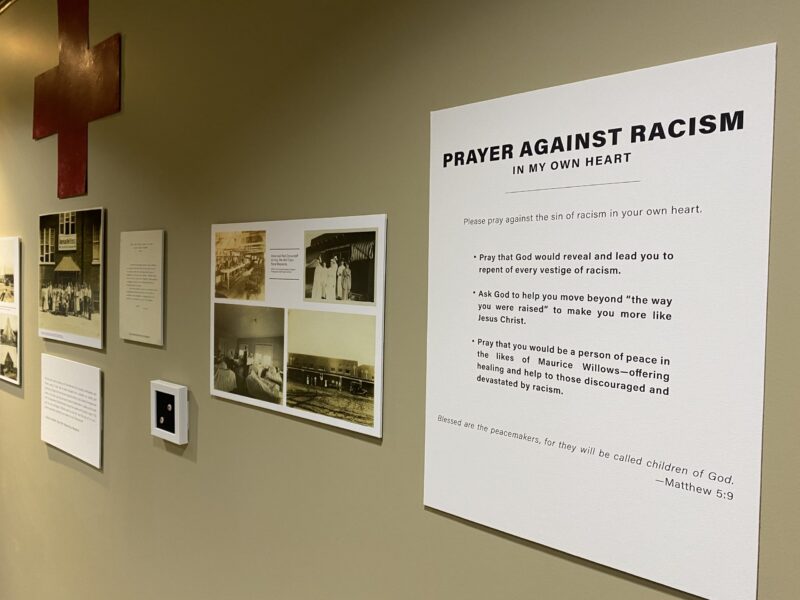 The words on the wall are jarring.

They are filled with racist language and victim blaming.

Worst of all, they are taken from the mouths of professed men of God — from sermons preached on the Sunday after the Tulsa Race Massacre of 1921.

“I got emotional about some of the things that I did not know,” said state Sen. Kevin Matthews, founder and chairman of the 1921 Centennial Commission, which is commemorating the unlikely rise and devastating fall of Tulsa’s “Black Wall Street.”

Visitors such as Matthews, a Black Democrat who grew up in Tulsa but did not learn about the massacre until adulthood, experience the painful quotes through a special prayer room at the First Baptist Church.

The Southern Baptist congregation aims to tell the truth about past sins while asking God to bring racial unity at the 100-year anniversary of an atrocity that this Oklahoma city — and the nation — tried for decades to ignore.

“As a person of faith, as a follower of Jesus, I believe that talking to God can heal a lot of things, so we got our creative people behind this,” said the Rev. Deron Spoo, whose church, founded in 1897, occupies a sprawling downtown campus.

Up a short stairway by the congregation’s main worship area, the museum-like exhibit features historical notes, photos and newspaper clippings, along with suggested prayers.

Guests take seats on maroon-cushioned benches as they pause and bow their heads.

“I think we need to confront sin where we can, where we recognize it, and also pray against our own blind spots,” said Eric Fox, a First Baptist member who came with his wife, Jamey, and their 19-year-old daughter, Kennedy.

“So, for me, this was a way to take a prayerful approach, to do some self-examination, some self-reflection, but also to pray for myself, my family, my church, my community,” added Fox, a former history teacher who serves as an associate principal at Jenks High School, one of Oklahoma’s largest high schools.

‘The Most Disturbing Thing’

The exhibit recounts how armed white rioters burned and looted 35 square blocks of this city’s Greenwood District on May 31-June 1, 1921.

The mob violence resulted in as many as 300 deaths, mostly Black people, and left the thriving African American business community and surrounding residential area in ruins, according to a state-appointed investigative commission’s report issued in 2001.

This exhibit in the Tulsa Race Massacre Prayer Room at First Baptist Church in Tulsa highlights an editorial that appeared in the Tulsa Tribune three days after a white mob’s deadly siege of the Greenwood community on May 31-June 1, 1921. The display goes on to say “the words of this editorial reveal the spirit of racism that, unfortunately, still exists in our culture today.” (Bobby Ross Jr./For Oklahoma Watch)

“It is emotional and shocking,” said Jamey Fox, details of the brutality fresh in her mind as her family left the prayer room.

Spoo said he had heard about the massacre since arriving in Tulsa in 2000. But the pastor had not delved into the specifics.

“As I saw the centennial approaching, I felt a personal and pastoral obligation to be better informed,” Spoo said, “and hopefully form a meaningful response on the part of my church.”

About a year ago, he read “Tulsa 1921: Reporting a Massacre,” a 2019 book by Tulsa Worldjournalist Randy Krehbiel.

“Krehbiel goes into great detail about things that, even though I’ve lived in Tulsa for 21 years, I never knew,” Spoo said. “By the way, I kind of count that to my shame.”

Spoo’s awakening led to the creation of the prayer room, which opened in February and will close next week.

Among the newspaper clippings displayed at the church: a Tulsa Tribuneeditorial — published three days after the massacre — that repeatedly uses a racial slur in reference to the decimated Greenwood District and its people.

“It uses some words that we shouldn’t use in our culture anymore, and that’s right there in the center of our prayer room,” Spoo said, explaining that the church wanted to reflect the past accurately “because that shows us what we’re trying to change.”

Even more shocking to many visitors, though, are the words attributed to pastors of some of Tulsa’s oldest churches.

“The most disturbing thing to me was … what the heads of these large churches of Christian faith said about Black people,” said Matthews, who toured the prayer room with fellow state Sen. Dave Rader, a white Republican who is a First Baptist member.

“It was basically horrific and disappointing,” added the Centennial Commission leader, who attends the North Peoria Church of Christ, a predominantly Black congregation. “It seemed to be a sign of the times, and I thank the bold leadership of Pastor Spoo and that church to tell that story in an honest way.”

The Tulsa Race Massacre occurred on the Tuesday and Wednesday after Memorial Day 1921 — fueled by racial clashes over a purported incidentinvolving a white teenage girl and a young Black man or teen.

No written records remain, if any ever existed, of what was said in the surviving Black churches the following Sunday, according to Krehbiel’s book.

But the local papers covered what prominent white pastors preached in the massacre’s aftermath, and Spoo deemed it important to reflect their sentiments in the prayer room.

“There has been a great deal of loose-mouthed and loose-minded talk about the white people of Tulsa being equally to blame with the Blacks,” the Rev. Harold Cooke said at Centenary Methodist Church in 1921. “Any person that makes that assertion makes an assertion that is false to the core. It should be a lesson learned, once and for all that the colored man is a colored man and a white man is a white man, and there can never be anything like social equality between the two races. Many negroes realize this and are the better element of the colored race.”

At First Presbyterian Church, the Rev. C.W. Kerr said: “The colored people must understand they started it. The fact of their arming and coming up through the city was an outrage to the citizenship of Tulsa.”

“If it is true that our wives, our children and the people of Tulsa were threatened with being at the mercy of armed negroes, then the white man who got his gun and went out in defense with it did the only thing a decent white man could have done. … There is one thing upon which I would like to make myself perfectly clear. That is racial equality. There has never been and never will be such a thing. Steps toward racial equality are the worst possible thing for the Black man. There has been too much of this social equality, and the low-down white trash are responsible.”

“We must not make a martyr of the negro, even though many hundreds of them have suffered innocently. There are all too many of the so-called leaders of the negro race who habitually discredit the white race as to our willingness to give the negro a chance under all the rights to American citizenship. What other nation in all human history has done as much … as the white race has done for the race which but a brief half-century ago emerged from slavery? A race which even in slavery was a thousand times better off than the Black princes who ruled their race in Africa. We tax ourselves to educate him; we help him to build churches, we are careful to keep him supplied with work at a good wage, and trust him with a ballot, and all we ask of him is to behave himself and prove himself worthy of our trust.”

Missing from the prayer room is any mention of what was said at First Baptist itself that Sunday.

The church’s archives “are mysteriously silent” on the Rev. William O. Anderson’s sermon that day.

“However, we have little reason to hope that his statements departed from that of the other pastors that history happened to record,” suggests a note beside the other statements.

But the prayer room experience does not end with the 1921 sermons.

After envisioning the thick, black smoke rising from the Greenwood District and trying to reconcile the racist statements “coming from the hearts of people who claim to know and serve God,” visitors encounter a joint message from those same churches’ present-day pastors.

A redeeming moment, Spoo calls it.

“Racism, in any form and at any level, is incompatible with being a follower of Jesus Christ,” he and the other pastors declare.

The Rev. Jessica F. Moffatt, First United Methodist Church’s lead pastor, characterizes the prayer room as a “tangible, visible expression of the commitment of Tulsa pastors and churches to fight against racism.”

“The room leads a person full circle,” said Moffatt, who has urged her congregation to visit it. “It begins with the 100-year-old truth that the ugly sin of racism brought inhumane acts against Black Tulsans, but then it leads participants to the new truth. The new truth is that the Tulsa faith community will not tolerate racism in our city, and we will take actions toward healing and unity.”