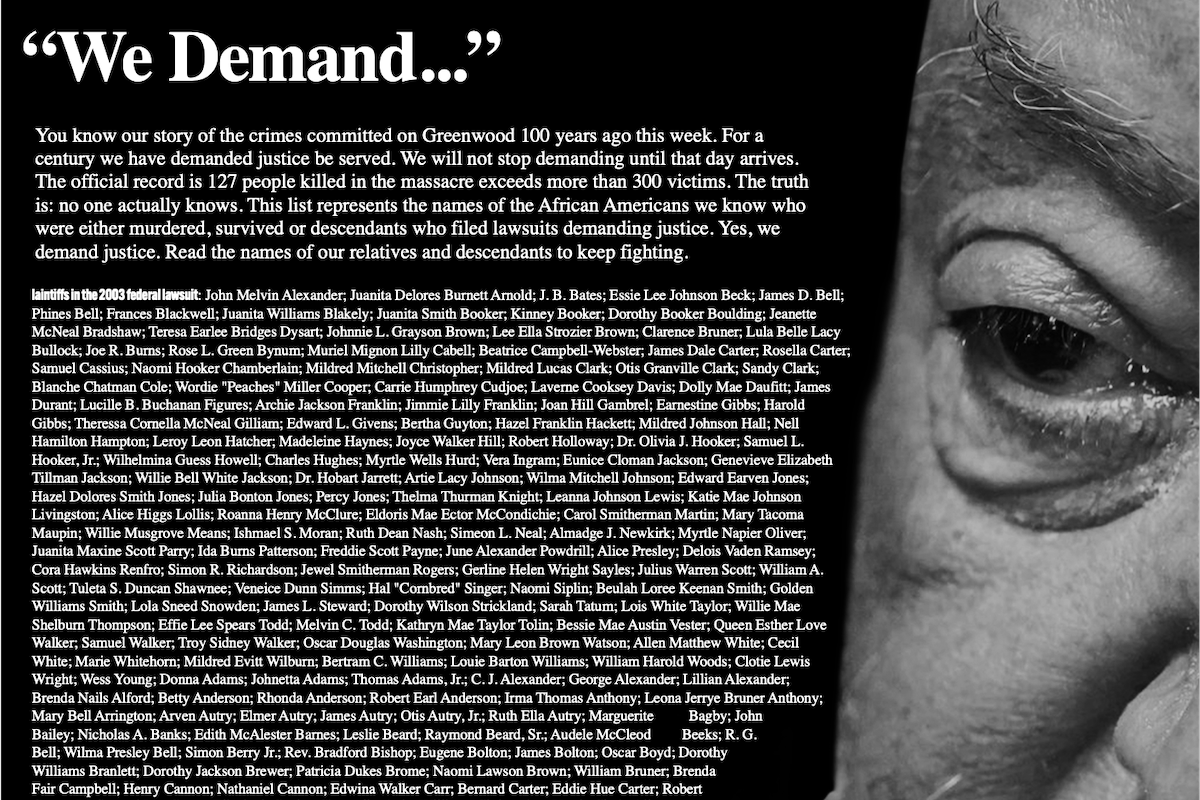 By Gary Lee
For The Oklahoma Eagle

One hundred years after a race massacre destroyed the heart of Tulsa’s Greenwood District, President Biden visited the scene of that tragic event this week and told survivors and descendants that their story would not be forgotten.

“For much too long, the history of what took place here was told in silence,” Biden said in an emotional speech at the Greenwood Cultural Center. “While darkness can hide much, it erases nothing.”

The first U.S. President to visit the Greenwood area, Biden used his appearance to give a broader American audience the details of the bloody violence that occurred when a white mob descended on Greenwood in late May and early June 1921, killing as many as 300 people.

“My fellow Americans, this was not a riot,” Biden said.

“This was a massacre.”

Biden’s appearance was greeted warmly by the crowd, which included the three survivors of the massacre – Viola Fletcher, 107; her brother, Hughes “Uncle Red” Van Ellis, 100; and Leslie Bloomfield Randle, 106 – and other descendants and leading North Tulsa politicians, activists, community leaders members of Congress and key Black White House officials. On several occasions, the crowd rose to give him ovations.

Before his speech, Biden toured the Hall of Survivors in the Greenwood Cultural Center. Its walls are lined with some pictures of Green- wood in its glory days before the massacre and others of the devastation the massacre brought. Biden also held private meetings with the three known massacre survivors and descendants of victims of the massacre. During the sessions, he showed a deep interest in the stories of victims who lived the horrors of the massacre and those who perished in it.

Biden flew into Tulsa Tues- day and spent several hours in the city. His day long visit, focusing almost exclusively on predominantly Black and low-income North Tulsa, marked a turning point in the telling of the Greenwood Massacre and the broader story of the distressed community surrounding it. Until recently, the saga of the massacre — and its long shadow of consequences — were little known outside of limited circles. During the run-up to the centennial of the massacre this year, vari- ous documentaries and media reports have brought national and international attention to the massacre.

“A mob tied a Black man by the waist to the back of their truck with his head banging along the pavement as they drove off,” Biden said. “A murdered Black family draped over the fence of their home outside. An elderly couple, knelt by their bed, praying to God with their heart and their soul, when they were shot in the back of their heads.”

Biden also drew the connection between the Tulsa massacre — and similar events that occurred in other American cities — and the systemic racism that still lingers in the U.S.

“This story isn’t about the loss of life,” he said, “but a loss of living, of wealth and pros- perity and possibilities that still reverberates today.”

“We do ourselves no favors by pretending none of this ever happened,” he added. “We should know the good, the bad, everything. That’s what great nations do: They come to terms with their dark sides.”

Several attendants of the appearance praised the visit. “The President coming to our com- munity at this time is history in the making,” said Michelle Brown-Burdex, the long-time Greenwood Cultural Center program director. She gave Biden a tour of photographs of the massacre before his speech. “It’s a validation of our cause.”

Lauren Usher, a descendant of famous Greenwood hotel owner J.B. Stradford, intro- duced Biden at the event. She said he is positioned to right the wrongs caused by the massacre. He “understands that as a nation we are and we must be strong enough to confront the dark periods of our history with a bold agenda of equity, repair and healing,” she said.

In his speech, Biden outlined plans to target the racial wealth gap and reinvest in communities such as North Tulsa that have been left behind by failed policies. One step in the plan will boost homeownership in communities of color. The target will be to help small busi- ness ownership grow by nearly 50 percent in the next five years. It will address the racial discrimination in the housing market by developing and building civic infrastructure with a $10 billion Community Revitalization Fund. The goal of this fund is to spark new local economic activity and build community wealth.

Biden also pledged to help neighborhoods like North Tulsa build political power by fighting Republican efforts to restrict voting, using the anniversary of a racist massacre here to respond to Democrats’ anxiety that his low-key approach is threatening fair elections and their own electoral future.

Biden announced that he is asking Vice President Harris to lead an effort against the increasing array of Republican-led state laws that restrict voting in various ways.

During his tour of the Cultural Center, Biden also floated the idea that the Interstate Highway that bisects the Greenwood District might be reversed.

Some critics felt that Biden did not go far enough in addressing the problems facing Greenwood — or of black America in general. There is an ongoing campaign for the survivors and descendants of the massacre to secure reparations for the losses they suffered during and after the massacre, but Biden failed to take a stance on it.