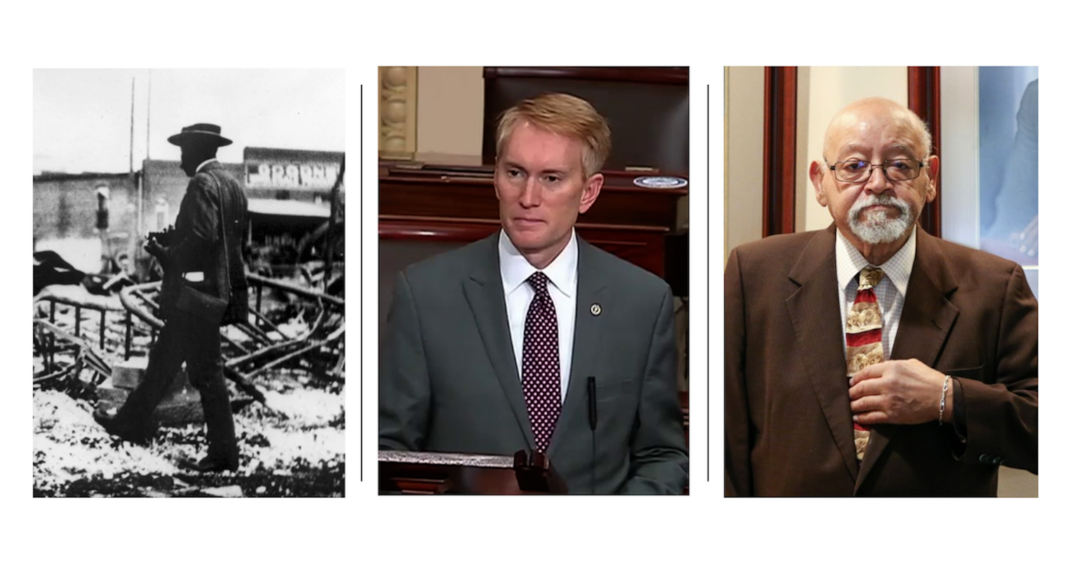 On Jan 14, 2021, Senator Lankford, in a1009-word open letter addressed “To My Friends in North Tulsa,” said Tulsa is set to recognize “the 100th anniversary of the worst race massacre in our nation’s history.”

He is a member of the 1921 Race Massacre Commission which is planning activities for commemoration of the massacre. At the same time, he is in lockstep with a group of U.S. Senators and U.S. Congress people, who were hell bent on delaying the U.S. Senate certification of the electors from all fifty states who were unanimous in following the popular vote favoring President Joe Biden, Jr., and Vice President Kamala Harris.

While knowing all along Congress could not legally ignore any state’s electors or change any state’s vote, he claims he was not trying to disenfranchise black voters “but to resolve any outstanding questions (regarding voter fraud) before the inauguration on January 20”… in order to strengthen the confidence of all Americans … in their electoral system … and knows their vote matters.” His act was an act of futility. He put politics over principle.

By his own admission, he knew that his act to form an electoral commission was an exercise only to curry favor with his voters, and no senatorial inquiry would change the election results.

From our point of view, his act served as a guise to cast aspersions on the validity of the Black voters, not unlike the presidential compromise which followed the formation of America’s only federal electoral commission in 1877.  Former President Trump’s allegation of voter fraud concentrated on heavy voting districts of Black, Indian, and Latino.

In 1877, by an informal agreement, the presidential election dispute was resolved between southern Democrats and allies of Republican Rutherford B. Hayes, by ending the era of reconstruction, and beginning the era of American apartheid, called Jim Crow. Among other horrendous things, Black folks were disenfranchised.

In the 2020 presidential election, both the popular and electoral college votes were overwhelmingly in favor of President, Joe Biden, and Vice President, Kamala Harris.  No federal electoral commission was needed.

On January 6, 2021, when the armed white racist mob invaded the U.S. Congress, waiving a Confederate flag and beating a police officer with an American flagpole, and yelling for the death of U.S. House Speaker, Nancy Pelosi, and Vice-President Mike Pense, it jolted Senator Lankford.  He reversed his position on the federal commission inquiry and dropped his demand for a commission.  Fortunately, he chose principle over politics.  His next test is whether he will vote to impeach Donald Trump.

Senator Lankford must change his perceptions about Black people.  The dynamics of that needed transformation may occur through his continued work on the 1921 Race Massacre Commission.  In one of his speeches before the U.S. Senate, he suggested that Black people and Whites should visit the homes of each other and break bread together to better understand each other.  To others, that is as ineffective as Nancy Reagan’s cure for drug use “By just say(ing) No.”  We agree with Senator Lankford, we cannot legislate love, but we can certainly legislate laws requiring harsh penalties when people commit acts of disrespect and hate.

Another insight into Senator Lankford’s mindset about race is his misuse grammatically of the words “North Tulsa.”  To begin the salutation in his open letter with “To my friends in North Tulsa,” we make this observation:  His capitalization of the word “North” in front of the word Tulsa grammatically reveals his frame of mind.  Basic grammar teaches us that capital letters are used only at the beginning of a sentence or for the identification of proper names.  Geographically, there is no such place as “North Tulsa.”  To describe it as such, grammatically suggests it is not a part of the City of Tulsa and is a separate geographic unit,  unless of course one thinks of it as a separate place.  If he desires unity among people of Tulsa, he should refer to people as Tulsans. The term “North Tulsa” brands people with negative presumptions, biases, and prejudices.  Of course, there are some other people, who do regard Tulsa north as “North Tulsa,” separate and apart. Over past decades, Tulsa north has been treated with benign neglect.

Lastly, we all recognize that Senator Lankford does not need the Black vote to remain a U.S. Senator from Oklahoma.  We also recognize that in a “red state” such as Oklahoma, for him to vote to impeach Donald Trump may be political suicide.  Is he a profile in that kind of courage?

As to the rest of the members of the 1921 Race Massacre Commission, Senator Lankford, as cumbersome as his attempts have been, is a person with a genuine interest in experiencing our shared humanity.  But we, too, must remember we also are flawed.  Senator Langford has much to learn about the Black experience, and the Commission should be eager to engage him.  For Senator Lankford to be immersed in the Black experience is a sure way to expose the malady of white privilege.