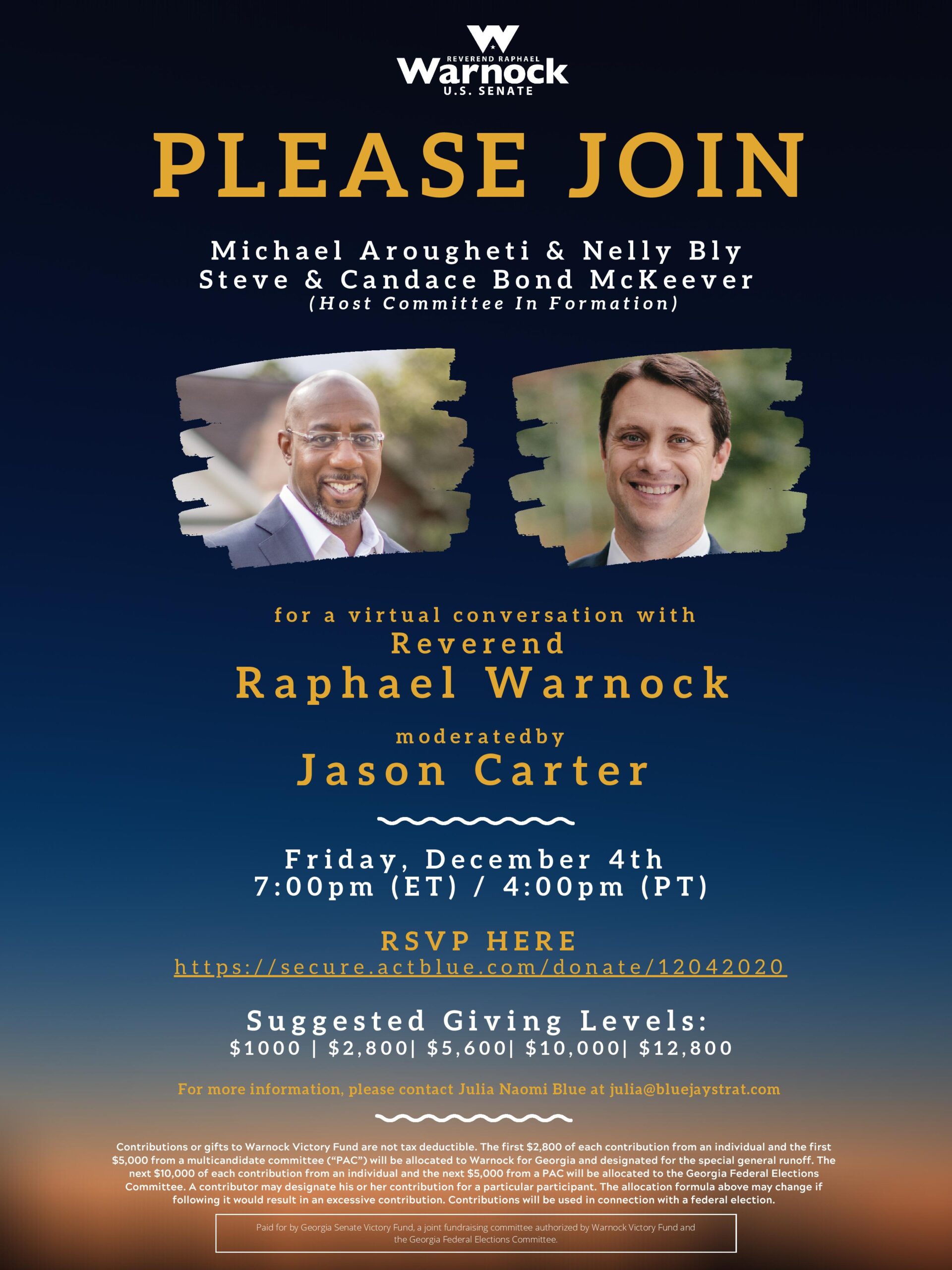 “I am so humbled to be here with you today in this sacred place, surrounded by men and women who advanced the cause of freedom,” Loeffler said from the lectern. Sitting behind her was Ebenezer’s pastor and her future Senate opponent, the Rev. Raphael Warnock.

Loeffler is unlikely to be invited back for next month’s ceremony. She and her compadres have spent the last month damning Warnock as a radical Democrat who hates police, ridicules opioid addicts, and speaks ill of the U.S. military — citing as evidence highly selective passages from years of sermons.

Until last weekend, the Loeffler campaign had wisely steered clear of direct attacks on Ebenezer itself. As a cultural touchstone, the storied church once led by King and his father has become — as Loeffler noted — a sacred place.

But then U.S. Rep. Doug Collins, a vanquished Republican rival now campaigning at Loeffler’s side, said this about Warnock on Saturday: “There is no such thing as a pro-choice pastor. What you have is a lie from the bed of Hell. It is time to send it back to Ebenezer Baptist Church.”

I have been unable to decide which is more disturbing — referring to an African American man as an “it,” or marking Ebenezer and its congregation as a den of satanic influence. But it is hard to walk either back — and with her silence, Loeffler has acquiesced to both.

No doubt, many Loeffler fans will say she, too, has been the object of character assassination. And there is truth in that. Democrats have been unsparing in their criticism of her stock trades, and her toeing of the White House line when it has come to the pandemic.

But Loeffler and her colleagues are trashing more than a Jan. 5 runoff opponent. They are trashing the fragile relationship that Georgia Republicans have maintained with Ebenezer and, by extension, the King family — a relationship insisted upon by Johnny Isakson, whom Loeffler was selected to replace in the Senate.

For more than 25 years straight, Isakson was present for MLK Day ceremonies at Ebenezer. Often, the senator was the only Republican of note in attendance — a personal statement about his party’s need to diversify its base of support.

Raphael Warnock is now being painted as a radical socialist who would lead the nation to ruin. But he once served, at Isakson’s invitation, as chaplain of the day in the U.S. Senate. Warnock was also Isakson’s guest at the State of the Union address by President Barack Obama in 2012.

Idealism wasn’t the Republican senator’s sole motive. Warnock considered a Democratic run against Isakson in 2016, ultimately deciding against it. That year, Isakson finished 4 points better than presidential candidate Donald Trump in the Georgia general election, largely because of stronger support among Black voters.

Loeffler & Co. are working from a specific template — the Republican attempt in 2008 to stitch Obama, then a Democratic presidential candidate, to Jeremiah Wright, the fiery pastor of the Chicago church the Obamas attended.

It is a strategy abetted by a key difference, easily exploitable, between white and black congregations in the Protestant world. Generally speaking, white churches emphasize personal salvation. In black churches, that emphasis is often in tension with the priority of social justice — a tradition that pre-dates the Civil War in the U.S. In theological shorthand, it is “the sin of slavery” vs. “the slavery of sin.”

Let us dissect one example. In mid-November, a conservative media outlet somehow came by the knowledge that, ‘way back in 2011, Warnock uttered the phrase “America, nobody can serve God and the military. You can’t serve God and money.” A three-minute YouTube video was provided as evidence.

The problem is that there were 30 minutes of sermon in front of that clip, which make clear that Warnock was delivering a very standard pulpit point about priorities — that one cannot serve two masters, and that one’s first loyalty is to God.

In churches with largely white congregations, pastors will often make spouses squirm by insisting that God must come before wife or husband. From his Ebenezer pulpit, Warnock was making a similar point — about powerful individuals and entire nations.

Did I mention that this particular sermon was delivered on Palm Sunday? It is a day when a preacher’s focus falls on Jesus’ appearance before Pontius Pilate, the military governor of Judea.

For some reason, the archeologists who dug up that 2011 sermon by Warnock neglected one of the pastor’s first examples about the dangers of a powerful person operating without a God-driven conscience. Warnock cited a certain reality TV personality who was then spreading the lie that President Obama wasn’t born in the United States.

But yes, Warnock did say that God should have priority over military service or money. Doug Collins — he who uttered those fiery words about Ebenezer — might quibble with the exact words that Warnock used nine years ago. “I pastored for over 11 years,” Collins said last Saturday. “I’m still a United States Air Force Reserve chaplain who served in Iraq.”

And yet, in essence, Collins agrees with Warnock. The Georgia congressman/chaplain has been a steadfast champion of religious expression in the U.S. military.

In July, Collins wrote a letter to the Pentagon protesting a recent Navy order that prohibited service members and chaplains from attending off-base, indoor religious services — to prevent the spread of COVID-19.

The Navy backed down. God first, military second, one might say.

We have weeks to go before these two Senate contests are over. But it is already clear that an important bridge that connects two very different groups of Georgians will be in need of repair.

Win or lose, the Rev. Raphael Warnock will be at Ebenezer Baptist Church on Jan. 18, 2021 to celebrate Martin Luther King Jr. Day. Win or lose, Kelly Loeffler almost certainly will not.

But a Republican presence will be required, and the next election cycle has already begun. Perhaps Gov. Brian Kemp, who will be running for re-election in 2022, might have a blank space on his calendar for that particular Monday.