Earlier this month the Journal Record named Mautra Staley Jones the Oklahoma Woman of the Year. Every fall the Journal Record recognizes 50 women from across the state who exemplify exceptional leadership in both their careers and their service to their community. The woman of the year is selected from this pool of highly distinguished candidates, and this year Jones received the honor.

Jones said she had been selected as one of the 50 making a difference for the past three years in a row. These multiple recognitions have allowed her to join what the Journal refers to as their circle of excellence. Even though she had been recognized in the past, Jones said winning the title of Woman of the Year came as a complete surprise.

“I was delighted, completely surprised, and very humbled because all of these women are just tremendous,” Jones said. “I’m still in shock especially given all the incredible women I was blessed to be honored alongside.”

In addition to the many hats Jones wears at Langston University, she also has an extensive list of community service achievements. Governors Kevin Stitt and Mary Fallin appointed Jones as a board director for the Oklahoma Office of Juvenile Affairs. She is also a commissioner for the Oklahoma Merit Protection Commission and a member of the Oklahoma standards steering committee. She serves on the board of directors for the Oklahoma City Civic Center Foundation and is a member of various other civic organizations.

Jones grew up in Ardmore and graduated from Ardmore High School in 1997, and she believes she owes a great deal of her success to her upbringing.

“All that I am and all that I’ve accomplished I attribute to my upbringing in Ardmore,” she said. “I’ve been blessed with considerable opportunities, and I owe a great deal of that to the values instilled in me by my grandmother who sacrificed so much to raise my brothers and me. I appreciate the firm foundation Ardmore City Schools established by providing me with an excellent education and the community members that invested in my growth and development through the years.”

Jones said she finds it especially meaningful to be able to serve others who are facing similar challenges to those she grew up with.

“A lot of the professional opportunities I’ve been afforded have allowed me to serve those who face various challenges — those who might be first generation college students,” she said. “That’s so meaningful for me because I too understand those challenges. I’m lucky because I had a community to rally around me, but there were a lot of challenges growing up. I credit my grandmother for everything she did to ensure my siblings and I could have as normal a childhood as we could.”

Jones is currently working on her Doctorate in Education in Leadership and Learning in Organizations from Vanderbilt University. After defending her dissertation this December, she expects to obtain her Ph.D.

In addition to her many professional achievements, Jones is also a proud wife and mother. She and her husband, U.S. District Judge Bernard M. Jones II, have three children: Bernard “BJ” (11), Kennedy (7) and Brendan (5). 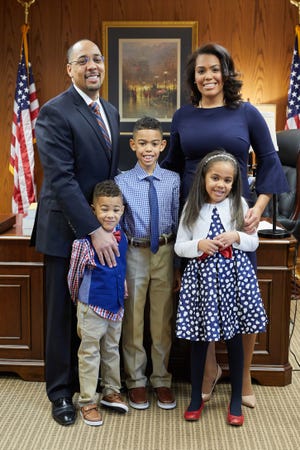 Jones said she is unsure exactly what the future holds, but she is excited to take it on.

“I’ve been blessed with so many opportunities, and I suspect they will continue presenting themselves,” Jones said. “I’m a very blessed woman, and I know it. I’m very appreciative of God and to all of those I have worked with. I don’t know exactly what’s next, but I know it’s exciting!”