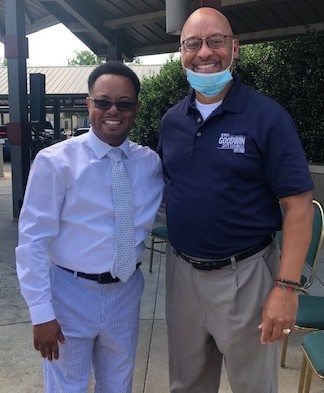 Rev. Marlon Coleman, mayor of Muskogee, has given his endorsement of Jerry Goodwin for City Council District 1 in the City of Tulsa.

“I’m excited about the opportunity to serve as mayor of Muskogee. Our campaign was based on hope and the promise of a better future for generations of Muskogee residents. I have known Jerry Goodwin for quite some time and he brings the same excitement for the City of Tulsa’s needs. I believe he is more than qualified to represent the people of Tulsa as its next City Councilor,” says Mayor Coleman.

Last week on Tues., June 30 marked a historic day in Muskogee, Okla. Rev. Marlon Coleman was elected the first black mayor in the history of the city. The response from Muskogee and from people across the state has been excitement and overjoy for such progress in elected office in times such as these.

The campaign for Jerry Goodwin congratulates and extends its support of Mayor Coleman and looks forward to future collaborations between the city of Tulsa and the city of Muskogee.

“I am energized and inspired by the election of Mayor Coleman. I am pleased to receive his support of my campaign for City Council District 1 in the City of Tulsa. He and I believe that cities and leaders can work together to build a better community and society for all. I look forward to working with Mayor Coleman and developing a regional coalition to advance northeastern Oklahoma and provide greater opportunities for its residents,” said Goodwin.

Goodwin attended the swearing-in ceremonies for Mayor Coleman in Muskogee on Mon., July 6.

The election for Tulsa City Council District 1 is Tues., Aug. 25, 2020. Goodwin is seeking a first term as a city councilor.

Jerry Goodwin is an educator, small businessman, communications consultant and public servant. For more than 30 years, Goodwin has served as an executive with a weekly newspaper, director of a non-profit, a university and college professor on the undergraduate and graduate levels, an owner of a business, and serves on a city board. He wants to bring his experiences and talents to the office of City Council, District 1. His record is one of building coalitions and providing results. Visit www.electjerrygoodwin for more information.