Little Richard, a founding father and pioneer of rock and roll, has died.

His son, Danny Penniman, confirmed the death to Rolling Stone. A cause of death remains unknown.

Some of his biggest hits including “Good Golly Miss Molly” were written while
he was washing dishes at the Greyhound bus station in his hometown of Macon, Georgia.

His musical influence was massive and touched artists such as The Beatles, who rerecorded several of his songs including “Long Tall Sally.”

Many young British musicians such as The Rolling Stones, David Bowie, and Rod Stewart, all credited him as an influence.

Even his stage persona served as inspiration for artists including Prince.

“Prince is the Little Richard of his generation,” Richard once said, according to Rolling Stone, adding that he addressed the camera and told the star: “I was wearing purple before you was wearing it!”

Mick Jagger took a moment to remember Little Richard on Twitter writing, “he was the biggest inspiration of my early teens.” 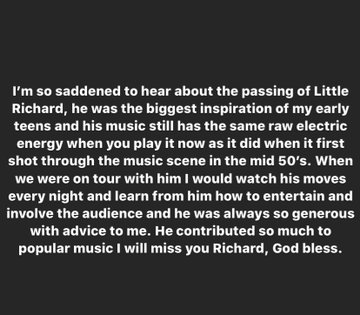 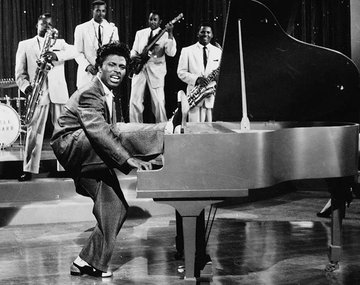 Spike Lee also remembered the icon and shared a commercial he directed alongside him.

Rest In Peace To One Of The True Creators Of Rock And Roll. This Is The Commercial I Directed With Little Richard And Michael Jordan, 1991.

For a short time, Little Richard pursued a career as a gospel artist before returning to his roots.

He went on to record a children’s album and provided theme songs for some widely recognized children’s programming including “The Magic School Bus.”
He also sang “Rubber Ducky” on “Sesame Street.”

Little Richard’s career was honored with an induction into the Rock and Roll Hall of Fame in 1986. He also took home a Lifetime Achievement GRAMMY.