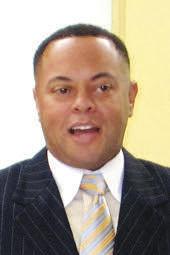 ColemanDirectors of the Historic Greenwood Chamber of Commerce will play host Tuesday to a meet-and-greet with Muskogee’s Ward IV Councilor Marlon Coleman.

Chamber President and Chairperson Freeman Culver III said Coleman’s “hard work” will be celebrated during the informal event, which will be from 5:30 to 7 p.m. at the Greenwood Cultural Center in Tulsa. Coleman is competing in an April 7 runoff election to be Muskogee’s next mayor against Wayne Divelbiss.

“Suddenly there is much excitement about the great possibility of having a black mayor in the Tulsa Metropolitan Area,” Culver said in an announcement released to media outlets, noting Coleman’s 40% victory in a five-candidate general election. “This is history in the making, and we would like for everyone in the area to meet this great man of service.”

Culver described the two-term city councilor as “a friend of the Historic Greenwood Commercial District,” which is known as “the Original Black Wall Street in America.” Culver said chamber directors “are confident” that Coleman will “take leadership as mayor and find ways to collaborate with every city, neighborhood, and historic district in Oklahoma to enhance economic development, wealth creation, and diversity practices in education and the workforce in Oklahoma.”

The Greenwood Cultural Center is located at 322 N. Greenwood Ave. in Tulsa.

Biden Takes The Helm As President: ‘Democracy Has Prevailed’