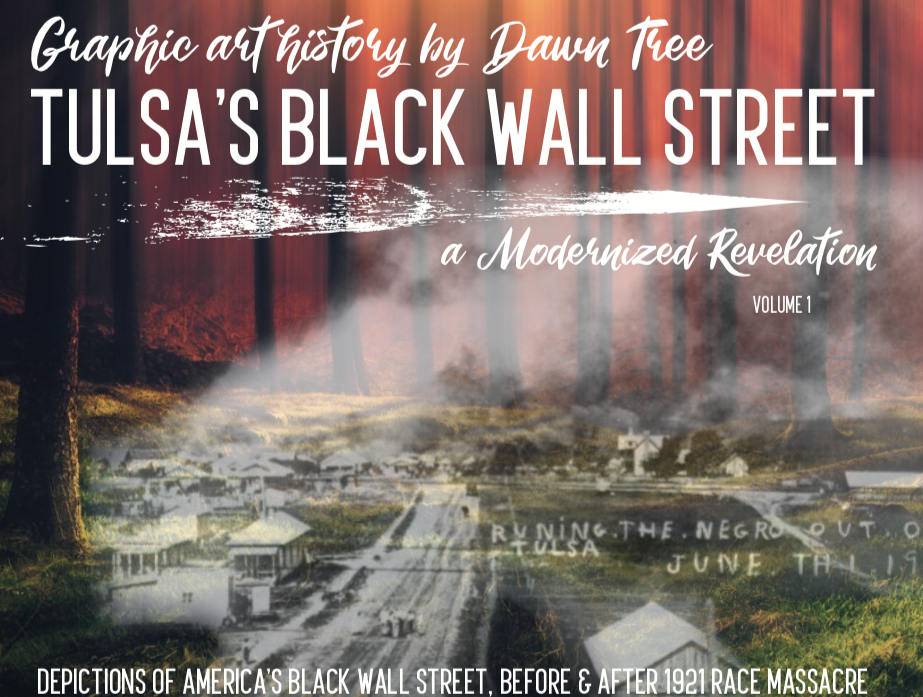 “Blood crying out from the ground,” is a resounding theme and feeling Dawn Tree says keeps coming to her. “It’s the reality that justice was never granted to those who made Tulsa their home and thrived within its segregated boundaries,” Tree exclaims about the 1921 Tulsa Massacre.

A once thriving Greenwood district, known as America’s Black Wall Street, was sabotaged and burned down within a 16 hour time span. No disaster claims were ever fulfilled for Black Tulsan’s, Blacks fled as far as New York afterwards, those who stayed were reduced to tents and many were captured and sent to city hall in chains. On top of that new rules and regulations were enforced— for instance rebuilding came with new regulations of commercial buildings having to be fireproof. Despite that, a new Black Wall Street was built just 5 years following and again displaced due to “urban removal” also known as urban renewal.

Tree says the residue of these facts is bleeding all over Tulsa right now as we speak. Tulsa is approaching its 100-year anniversary since this tragedy has occurred.

“Growing up here, leaving for a decade and now returning makes the environment 100 percent more clear,” Tree states. “Among many factors, the disunity and lack of resources is most prevalent.”

Tulsa’s Black Wall Street: A Modernized Revelation is a graphic art history book Tree composed just last year. She says while living in Oklahoma periodically during her career she is almost plagued to create this particular graphic art in which she takes archived photos and superimposes them with newer images that resonate in this day and age. The photos from before, during and after the massacre have been obtained from The Greenwood Cultural Center and Tulsa’s Historical Society and she layers the art in adobe illustrator.

Tree attended Jenks High School, went on to the University of Oklahoma for journalism with a minor in Africana studies, relocated to Washington, DC/surrounding for 10 years and also has lived partially in Ghana since 2014. She says there is no place like Tulsa, Oklahoma.

The vision for this series was prompted in 2012 while Dawn Tree was living in Oklahoma and attending Tulsa Technology Center for Web/Graphic Design, this after spending 4 years in Washington, DC. She took a one year hiatus from DC.

She returned again in 2018, becoming further involved in the current state of Black Tulsa via the Greenwood Cultural Center, the Greenwood & Black Wall Street Chamber, the Black Wall Street Market and more. This involvement has allowed her to see the profound oppression Tulsa still exists under. Creating art is one of the only ways she can feel at peace while residing in the state and living in the city where more than half her family lives.

The history is prolific, the tragedy and even rebuild less than 5 years later is something that needs to be focused on and the art she creates bridges archived photos with her journalistic findings and even imagination; making the history come to life and even more digestible as well as rememberable.

Tree hopes to open minds and erupt conversation that brings real change. Her vision is that the book be in every school and library in America and worldwide.

Tree has exhibited all over the U.S. in such cities as New York, Philadelphia, District of Columbia and even international in the continent of Africa specifically Ghana, where she just returned from a 5-month artist residency.

The book can be purchased at utreep.com and click the menu item shop. Her artwork can also be viewed and purchased there as well.