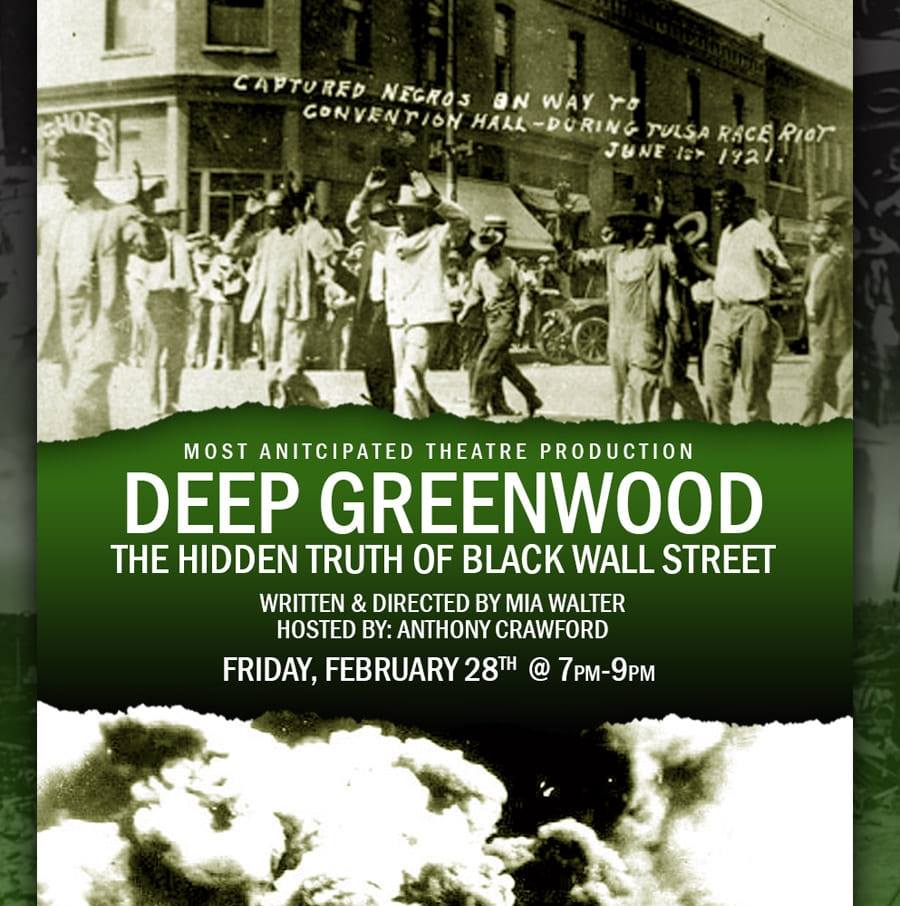 Mia Walter, the founder and Executive Producer of Deep Greenwood, created this production once she learned about the history of Black Wall Street and the Historic Greenwood District. “These are stories of real people who made a huge impact on the world we live in today,” says Walter. “We are giving a voice to those who came before us and fought hard to protect and rebuild their dreams. When you leave this play, you will be enlightened, empowered and inspired.”

Deep Greenwood: The Hidden Truth of Black Wall Street the stage play is a fact-based story from the early 1900s that will stir up different emotions and create lasting memories. During the time where racism thrived and segregation was law, two men by the name of O.W. Gurley and J.B. Stratford came together with a plan to start an all black business district and community in Tulsa, Oklahoma. While the black businesses thrived, many black people considered Tulsa the promise land until one night in 1921. This play will challenge everything you thought you knew and shine a light on the real uncut truth about the Tulsa Race Massacre of 1921, one of the deadliest, untold and unforgettable massacres in American History. It encompasses hope, unity and resilience for a generation who understood how important it was to stand strong.

While this production kicks off in Oklahoma, shows are already planned for Arkansas and Atlanta later in the year. The play kicks off in Oklahoma City at Douglass High School (900 N. MLK Ave) on February 28th at 7:00pm. Its next stop is in Tulsa at the Greenwood Cultural Center (322 N. Greenwood Ave) on February 29th at 7:00pm. Doors open at 6:30pm both days. Tickets for the play are $15 – $40 and can be purchased online at www.deepgreenwoodtulsa.com. Come out and see how Black Wall Street was created and why this part of history has been hidden for years. For more information about Deep Greenwood, contact Mia at mwalter1921@gmail.com. For media inquiries, contact Charity at Avenu PR at info@avenupr.com.