As the nation sits riveted to the daily drama that is the impeachment of President Donald J. Trump, the removal of the evil king from our great democracy moves forward as bills sit silent on the desk of Senate Majority Leader Mitch McConnell. While the impeachment effort is  surely an irritant, Trump is no doubt secure that he will be embarrassed but not removed. Because of the deep support from his base, he has a chance to win a second term. In the meantime, policies from the courthouse to the White House continue to dismantle decades of compassionate laws, regulations and policies that make up the safety net. As we go to press the New Cruelty is silently working to pay for tax cuts for the super-rich with callous cuts to tax dollars allocated for the least of us.

While Republicans and Democrats fight over the future of Trump the business of undoing efforts to alleviate hunger, homelessness, and health march on with little notice of their important functions. Sometimes the changing attitude is not so subtle. United States Attorney General was quoted last week saying: “But, I think today the American people have to focus on something else, which is the sacrifice and the service that is given by our law enforcement officers. And they have to start showing, more than they do, the respect and support that law enforcement deserves. And if communities don’t give that support and respect, they might find themselves without the police protection they need.” Sounds pretty menacing and nowhere close to President George H. Bush’s “kinder and gentler” policies. The new cruelty is going to manifest itself first in the budgets of governments everywhere.

The Trump administration planning to tighten work requirements for food stamps eligibility for so-called able-bodied adults without children. It could kick off 700,000 people from the program. Proponents of the change say the program was meant to help but not become a way of life. Like anyone enjoys needing help to eat.

If you are expecting any help from our First District Congressman, you better look somewhere else for salvation. U.S. Representative Kevin Hern applauds the new plan. He says he’s been a strong supporter of this plan from the beginning. “We should be encouraging our people to work, contribute to the economy, and put themselves on the path to independence rather than chaining them to the crutch of social programs” Hern said. I’m guessing Hern has never had to depend on a little help from the food stamp program. Might be time to find someone with a little heart during these trying times because there are more cuts coming.

It’s not just Trump. Apparently Oklahoma Governor Kevin Stitt is tired of the crutch of assistance. The Oklahoma Department of Health just asked the legislature for less money to operate their important functions. Commissioner of Health Gary Cox is asking for a 1 percent decrease from last year’s budget. He suggests he can do more with less. Fiscally impressive; however, it is not likely to do anything but reduce services. Poor planning no matter how you shine it up is poor planning.

The state is planning for major cuts in education and is on a public relations campaign to blame casino-rich tribes in order provoke them to give even more money to the state. Trouble is the tribes give plenty and spend millions in local communities every year. Stitt claims the tribes will be operating illegally after January 1, 2020 without a new compact. That is an opinion on his part. However, he and the Tulsa World are painting this picture of the tribes robbing the state. Tribes kicked in $150 million last year. The compacts should be allowed to renew. The government has broken enough promises to Native people. The state has invested nothing and risked nothing, and they just wait each month for a check. Go get your money back from the oil and gas industry. They are the ones getting away with not contributing to the state.

Trump is now planning to cut free school lunches for 500,000 students currently eligible for assistance. The cuts are part of reductions in the Supplemental Nutrition Assistance Program to kick off 3.1 million people because they are enrolled in food assistance programs administered by states. It will also affect school lunch programs which are already underfunded. Trump officials say the dual assistance amounted to a loophole. Trump’s plans were described as an “act of staggering callousness.”

The Trump administration is not done with the least among us. The homeless were not spared ruthless attention by Trump and his men. Enter Robert Marbut, who is set to head the U.S. Interagency Council on Homelessness. It’s function until now was to house the homeless. Which should make sense to most people. Marbut is well known in municipalities who don’t necessarily want to end homelessness. They want to stop housing them and remove them from sight. Marbut prefers services over housing. Marbut pushes the homeless to stay in crowded shelters. And to make it as unpleasant as possible.

Marbut is famous for pushing cities to make it illegal to feed the homeless. Marbut says hunger is not the root cause of homelessness. It may not be; however, they go hand in hand and taking away food doesn’t improve homelessness. Marbut’s shelters are more like punitive prisons meant to entice people to work.

Marbut helped design a Florida shelter that turned into a jail diversion program just for homeless people. Under his kind watch residents had to earn the right to sleep indoors on bunk beds. Any rule violation means the residents would be forced to sleep outdoors for up to 15 days. The state was using cruelty to end homelessness. That kind of craven thinking is going on as people concentrate on impeachment.

By the way Trump is cutting $8.5 billion in Federal funds for education while increasing funds ($5 billion) for children attending private schools. Trump wants to eliminate after school programs, teacher training and grants for other needs. There are also deep cuts in funding universities and colleges that educate people of color.

These are troubling times and for the moment, the most vulnerable cannot count on Trump, Stitt or Hern to help protect the vulnerable, they are nothing less than butchers of budgets. 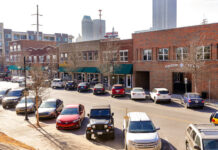 #Woke The Oklahoma Eagle Editorial: Does Anyone Fully Understand What The Greenwood Chamber Does?, People Of Color Are Dying From Covid And Denied Testing...