American gold medalist fencer Race Imboden knelt as the national anthem played Friday at the Pan American Games in Lima, Peru, to protest racism, gun control, mistreatment of immigrants and President Donald Trump. “We must call for change,” he tweeted afterward along with a photo. “This week I am honored to represent Team USA at the Pan Am Games, taking home Gold and Bronze. My pride however has been cut short by the multiple shortcomings of the country I hold so dear to my heart. Racism, Gun Control, mistreatment of immigrants, and a president who spreads hate are at the top of a long list. “I chose to (sacrifice) my moment today at the top of the podium to call attention to issues that I believe need to be addressed. I encourage others to please use your platforms for empowerment and change,” he said.

We must call for change.
This week I am honored to represent Team USA at the Pan Am Games, taking home Gold and Bronze. My pride however has been cut short by the multiple shortcomings of the country I hold so dear to my heart. Racism, Gun Control, mistreatment of immigrants, 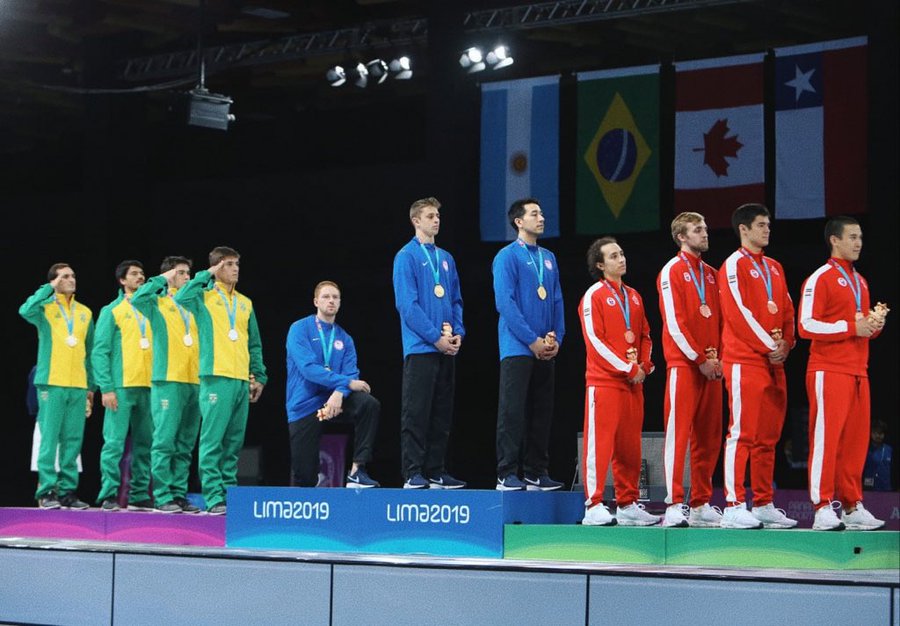 Imboden, 26, was ranked as the world’s second-best in the foil event, and won a bronze medal in the men’s individual foil on Tuesday. On Friday, he helped the US win gold in the men’s foil team event, and then took a knee on the podium as the Star Spangled Banner played. As Imboden knelt, his teammates Gerek Meinhardt and Nick Itkin stood tall. Several members of the silver medalist Brazilian team saluted and Canada’s bronze-winning team stood quietly. Taking a knee during the national anthem became a form of civil protest after former NFL quarterback Colin Kaepernick took a knee throughout the 2016 football season in protest of police brutality and injustice against people of color. Since then, many athletes, from NFL players, to soccer star Megan Rapinoe to amateur high schoolers have knelt as a form of protest, sparking anger from Trump and others.
Imboden was not the only American to protest during the anthem at the Pan American Games. Gwen Berry took gold in the women’s hammer throw competition on Saturday, and she raised her fist in the air at the end of the national anthem in protest. 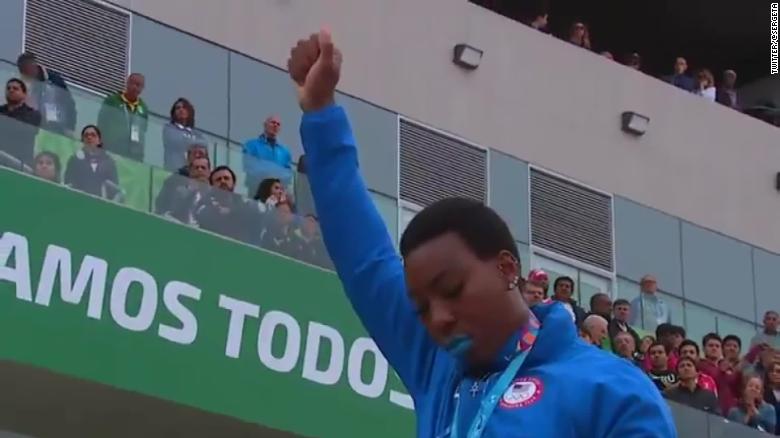 U.S. hammer thrower Gwen Berry raises her fist at the end of the national anthem at the Pan Am Games on Saturday. “Somebody has to stand for all of the injustices that are going on in America and a president who’s making it worse,” she told USA Today on Saturday night. “It’s too important to not say something.” Both could face disciplinary action, as all participants signed agreements not to make any political, religious, or racial remarks during the Games. US Olympic and Paralympic Committee spokesman Mark Jones said in a statement to CNN Sports that “every athlete competing at the 2019 Pan American Games commits to terms of eligibility, including to refrain from demonstrations that are political in nature. In these cases, the athletes didn’t adhere to the commitment they made to the organizing committee and the USOPC.” “We respect their rights to express their viewpoints, but we are disappointed that they chose not to honor their commitment. Our leadership are reviewing what consequences may result,” Jones said.