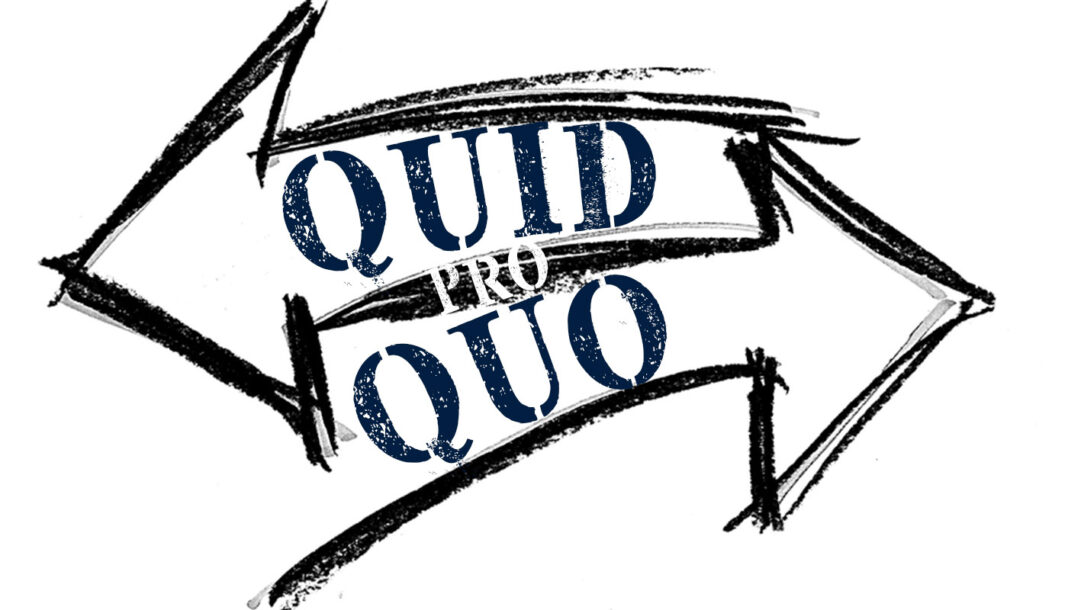 Quid pro quo (“something for something” in Latin) is a Latin phrase used in English to mean an exchange of goods or services, in which one transfer is contingent upon the other; “a favor for a favor”. Phrases with similar meanings include: “give and take”, “tit for tat“, and “you scratch my back, and I’ll scratch yours” and “one hand washes the other”. Other languages use other phrases for the same purpose.

The Latin phrase quid pro quo originally implied that something had been substituted, as in this instead of that. Early usage by English speakers followed the original Latin meaning, with occurrences in the 1530s where the term referred to either intentionally or unintentionally substituting one medicine for another. This may also have extended to a fraudulent substitution of useful medicines for an ingenuine article. By the end of the same century, quid pro quo evolved into a more current use to describe equivalent exchanges.

In 1654, the expression quid pro quo was used to generally refer to something done for personal gain or with the expectation of reciprocity in the text The Reign of King Charles: An History Disposed into Annalls, with a somewhat positive connotation. It refers to the covenant with Christ as something “that prove not a nudum pactum, a naked contract, without quid pro quo.” Believers in Christ have to do their part in return, namely “foresake the devil and all his works”.

Quid pro quo would go on to be used, by English speakers in legal and diplomatic contexts, as an exchange of equally valued goods or services and continues to be today.

The Latin phrase corresponding to the usage of quid pro quo in English is do ut des (Latin for “I give, so that you may give”). Other languages continue to use do ut des for this purpose, while quid pro quo (or its equivalent qui pro quo, as widely used in Italian, French and Spanish) still keeps its original meaning of something being unwillingly mistaken, or erroneously told or understood, instead something else.

In common law, quid pro quo indicates that an item or a service has been traded in return for something of value, usually when the propriety or equity of the transaction is in question. A contract must involve consideration: that is, the exchange of something of value for something else of value. For example, when buying an item of clothing or a gallon of milk, a pre-determined amount of money is exchanged for the product the customer is purchasing; therefore, they have received something but have given up something of equal value in return.

In the United Kingdom, the one-sidedness of a contract is covered by the Unfair Contract Terms Act 1977 and various revisions and amendments to it; a clause can be held void or the entire contract void if it is deemed unfair (that is to say, one-sided and not a quid pro quo); however this is a civil law and not a common law matter.

Political donors must be resident in the UK. There are fixed limits to how much they may donate (£5000 in any single donation), and it must be recorded in the House of Commons Register of Members’ Interests or at the House of Commons Library; the quid pro quo is strictly not allowed, that a donor can by his donation have some personal gain. This is overseen by the Parliamentary Commissioner for Standards. There are also prohibitions on donations being given in the six weeks before the election for which it is being campaigned. It is also illegal for donors to support party political broadcasts, which are tightly regulated, free to air, and scheduled and allotted to the various parties according to a formula agreed by Parliament and enacted with the Communications Act 2003.

In the United States, if the exchange appears excessively one sided, courts in some jurisdictions may question whether a quid pro quo did actually exist and the contract may be held void. In cases of “Quid Pro Quo” business contracts, the term takes on a negative connotation because major corporations may cross ethical boundaries in order to enter into these very valuable, mutually beneficial, agreements with other major big businesses. In these deals, large sums of money are often at play and can consequently lead to promises of exclusive partnerships indefinitely or promises of distortion of economic reports, for example.

In the U.S., lobbyists are legally entitled to support candidates that hold positions with which the donors agree, or which will benefit the donors. Such conduct becomes bribery only when there is an identifiable exchange between the contribution and official acts, previous or subsequent, and the term quid pro quo denotes such an exchange.

For more insight logon to: www.wikipedia.org