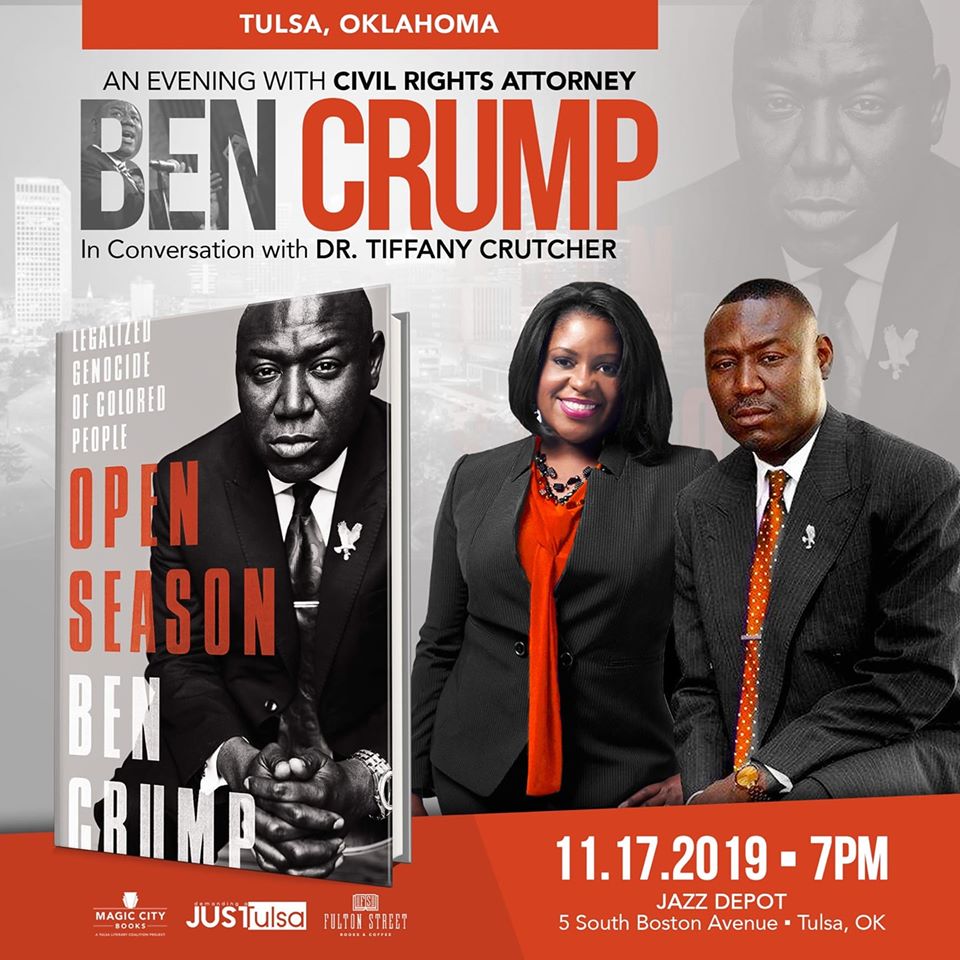 Demanding a JUSTulsa, in partnership with Fulton Street Books + Coffee and Magic City Books, will host an evening with civil rights attorney Ben Crump on Sunday, November 17 at 7pm at the Jazz Depot at 111 East 1st Street.

This event is free and open to the public; details and RSVP are at www.facebook.com.

“It’s an honor to have attorney Crump in Tulsa,” said Dr. Crutcher. “We are overdue for a change in the laws that protect bad cops and others who commit violence against people of color, and it’s time for this conversation.”

Mr. Crump’s book has been featured on The View, NPR, PBS NewsHour, Philadelphia Tribune, TheGrio, TIME, CBS This Morning, CNN, and MSNBC. Following the discussion, Mr. Crump will sign copies of his book, which will be available for sale care of Magic City Books.
ABOUT THE BOOK Genocide—the intent to destroy in whole or in part, a group of people.

TIME’s 42 Most Anticipated Books of Fall 2019 Book Riot’s 50 of the Best Books to Read This Fall As seen on CBS This Morning, award-winning attorney Ben Crump exposes a heinous truth in Open Season: Whether with a bullet or a lengthy prison sentence, America is killing black people and justifying it legally. While some deaths make headlines, most are personal tragedies suffered within families and communities.

Worse, these killings are done one person at a time, so as not to raise alarm. While it is much more difficult to justify killing many people at once, in dramatic fashion, the result is the same—genocide.

Taking on such high-profile cases as Trayvon Martin, Michael Brown, and a host of others, Crump witnessed the disparities within the American legal system firsthand and learned it is dangerous to be a black man in America—and that the justice system indeed only protects wealthy white men.

In this enlightening and enthralling work, he shows that there is a persistent, prevailing, and destructive mindset regarding colored people that is rooted in our history as a slave-owning nation. This biased attitude has given rise to mass incarceration, voter disenfranchisement, unequal educational opportunities, disparate health care practices, job and housing discrimination, police brutality, and an unequal justice system. And all mask the silent and ongoing systematic killing of people of color.

Open Season is more than Crump’s incredible mission to preserve justice, it is a call to action for Americans to begin living up to the promise to protect the rights of its citizens equally and without question.