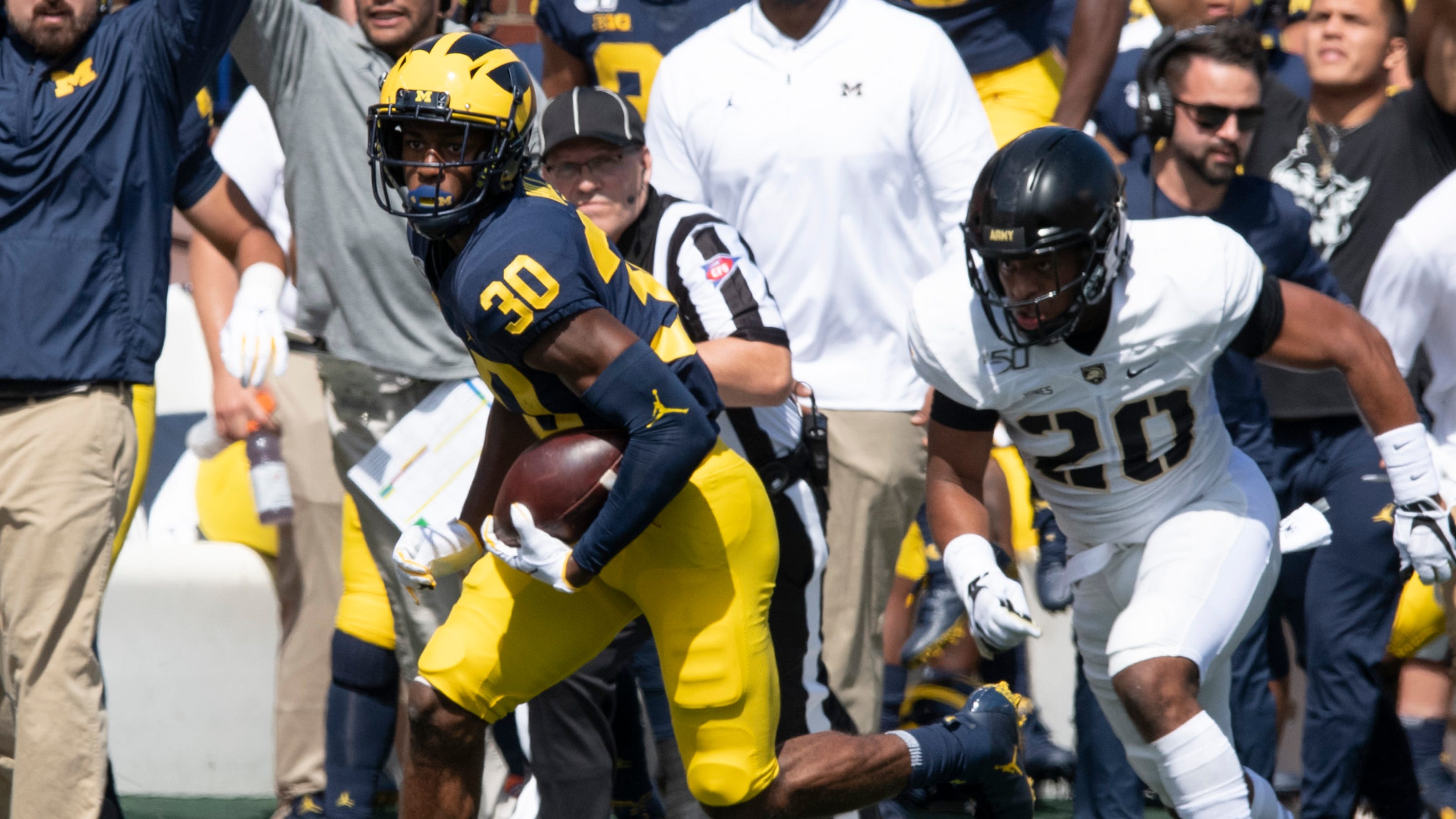 ANN ARBOR — Michigan players and coaches have been asked regularly about freshman safety Daxton Hill in recent weeks, and there’s a reason why.

The five-star recruit from Oklahoma continues to carve out a larger role for Wolverines defense after playing just one defensive snap in the first three games.

The talent that made him the No. 1 safety and No. 14 player in the 2019 class is beginning to translate to results on the field. He has played in 20 or more snaps in four of the past five games.

On Saturday, Hill had his first two fumble recoveries of his career in the team’s 45-14 win over No. 8 Notre Dame. The first came early in the game after the Irish blocked Will Hart’s punt. After a Notre Dame player touched the ball after the initial block, Hill pounced on it to give Michigan a fresh set of downs.

In the fourth quarter, Luiji Vilain forced quarterback Phil Jurkovec to fumble. Three Wolverines had a chance to dive on the ball but couldn’t come up with it. Hill, who has run a 4.3-second 40-yard dash, came diving in for the recovery.

“The two fumble recoveries, you just knew, even when he was 15-20 yards away, he could see the play developing in front of him,” Michigan head coach Jim Harbaugh said Monday at his weekly news conference. “Most of the time, ball on the ground, three or four people around it and you’re 18 yards away, you don’t think you can get there. But he just knew to accelerate and went in like an arrow through snow to get the football.”

Harbaugh also raved about his play in coverage and football IQ. On Notre Dame’s first drive, Hill stepped up and delivered a big hit on tight end Chase Claypool and broke up the pass on third-and-9.

After the Irish got a fresh set of downs following a Michigan penalty, Hill had receiver Braden Lenzy blanketed near the sideline on third-and-15, forcing Ian Book to throw the ball way over his head.

Hill played 22 snaps on defense Saturday and graded out as Michigan’s second-best defensive player, according to Pro Football Focus. This season, he has 14 1/2 tackles, 1 1/2 for a loss and two pass breakups.

“He is a really smart player,” Harbaugh said. “He understands beyond his years. “That throw to the boundary away from our sideline where he had the good coverage, he just sensed the sideline and saw the pass was high and was just as smooth as he could be without holding or grabbing.

“He just saw it all and calculated all those things and let the pass be incomplete. There were so many examples like that. He has a real intuition for the game.”

Hill’s ascension isn’t surprising to his teammates. He began the season buried on the depth chart but is now comfortably in the two-deep, especially with J’Marick Woods transferring this month as well.

“I think he has improved in all aspects and phases of football,” junior safety Brad Hawkins told reporters Monday. “He is a great player. Fast, getting more physical. He is definitely a guy that can cover anybody in the country. He is somebody who is definitely going to be special.”