Brad Jordan looks through the windshield of his white Mercedes and sees something he doesn’t like. He stops the car and calls out to a guy named Joe, just one among a group that quickly gathers to say hello to the favorite son of South Acres.

“Why is Charlie’s mama’s door open right there?” Jordan says.

Joe assures him everything is fine.

“They’re just letting a little air out,” he says. “Nobody would mess with her. Too many good neighbors. It’s the same as your grandma, B. If somebody messed with her the whole neighborhood would rise up.”

Satisfied, Jordan keeps slowly cruising around Holloway Street and some offshoots in a different manner than he did as a young kid with music on his mind. Jordan came out of South Acres to become an internationally renowned rapper known as Scarface. Now when he looks around his old neighborhood referenced with a list of street names — Holloway, Bellfort, Scott, Reed Road, Phlox — in his song “My Block,” he’s not looking for material for songs, but rather problems he would like to correct, which is why he’s running for City Council. 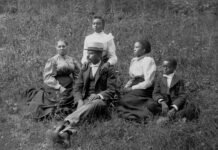 The Names Of 1.8 Million Emancipated Slaves Are Now Searchable In...