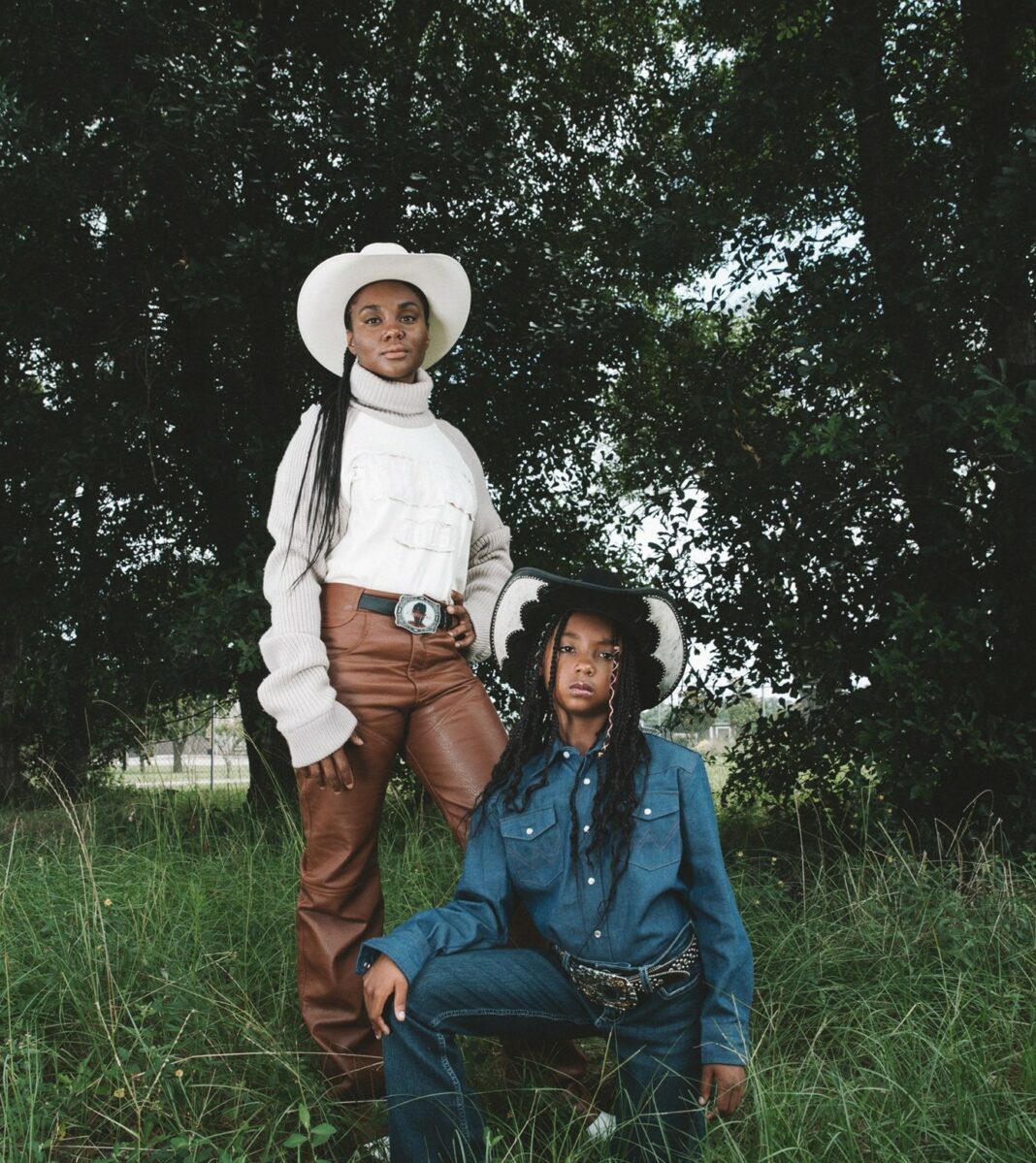 Taken from the autumn 2019 issue of Dazed. You can buy a copy of our latest issue here.

Rodeo champion Kanesha Jackson loves the 15 or so seconds she spends rushing through a competitive course on horseback. She talks about riding like it’s both an extreme sport and a waltz. “It’s all adrenaline,” she says, excitedly. “When you and a horse bond, y’all one. Y’all know each other, y’all know your movement, your heartbeat is the same. It’s a two-man event, not you out there alone. Every stride is shared between you.”

On any given weekend, you’re likely to find Kanesha holding the reins of her horse, veering tightly around a barrel in front of a crowd of cowboy hats. A third-generation cowgirl, Kanesha is making her mark on the national stage as one of the most prominent riders in Texas and beyond. A serial winner of All Around Cowgirl at the Bill Pickett Invitational Rodeo (BPIR) and the first female rider to rank in the top 30 of the Cowboy Professional Rodeo Association (CPRA), she is now working towards becoming the first African-American woman to qualify for the National Finals Rodeo (NFR). What’s more, Kanesha’s daughter, eight-year-old Kortnee Solomon, is one of rodeo’s fastest-rising child stars. She’s a BPIR junior barrel-racing champion, a junior breakaway champion,and BPIR’s 2019 rookie cowgirl: all moments that meant she qualified for the junior NFR this year.

There is a long history of black cowboys and cowgirls that has been all but scrubbed from the public record. But black cowboys have been riding high in the public consciousness this year as a direct result of the ‘Yeehaw Agenda’, a social-media phenomenon spearheaded by Bri Malandro. For Kanesha, the movement is just an approximation of the world she lives in, one that isn’t really representative of her rodeo lifestyle. Years before Lil Nas X brought black cowboys to radio with “Old Town Road”, Kanesha was saddling up for Hip Hop Cowboys, a music rodeo event where she contended as a DJ playing rap, R&B, gospel and blues. “You can tell from a mile away a person who rides horses and (someone) who’s just trying to look the part,” she says. “We carry ourselves different. We don’t dress to be seen we dress to our dress code.”

Kanesha has been a champion barrel-racer at the junior and semi-pro levels since winning her first BPIR All Around Cowgirl title aged 13, the youngest person ever to do so. Barrel-racing is a horseriding event at rodeo in which a horse and rider complete a predetermined path around stationary barrels, and the rider with the fastest time wins. It is a measure of both the horse’s natural physical ability and the rider’s command and horsemanship as, together, they must manoeuvre between the barrels at high speeds. In amateur competitions, Kanesha also competes in steer undecorating, which requires the rider to remove a ribbon from a steer’s shoulder, and girls’ breakaway, which requires her to rope a calf on the run.

But it is at the BPIR that Kanesha made her initial splash. Named after Bill Pickett, a Texan cowboy known for his spectacular displays at the rodeo, the event celebrates the rich history of cowboys and cowgirls of colour. Launched in 1984 by Lu Vason, the BPIR became a showcase for those riders who weren’t always welcome at white rodeos. Now, it has become an essential proving ground for the next great black rodeo stars.

Kanesha’s transition from BPIR to professional rodeo came with growing pains, however. “Going from a predominantly black association to a predominantly white association is a big difference, because with one you’re going to feel intimidated, (while) the other is your comfort zone,” she explains. But her parents had been preparing her for competitive life outside the BPIR. “My mom and my stepdad (taught) me from childhood. They took me to the different rodeo associations they had – black and white – and Bill Pickett set that foundation so that, when I do go into those large stadiums with those thousands of people, I’m not intimidated. I never changed my game, I have the same frame of mind.”

“I’ve been around it so long, I couldn’t do nothing but love it” – Kanesha Jackson

Kanesha is the stepdaughter of late BPIR head Sedgwick Haynes, and her mother, Stephanie Haynes, was one of the most decorated cowgirls in rodeo. “I was raised around it,” says Kanesha, whose maternal grandfather also competed in the sport. “I’ve been around it so long, I couldn’t do nothing but love it.” Kortnee, who vows to go pro and surpass her mum at rodeo one day, watches Kanesha’s runs closely for ways to improve. “I have her in tons of different associations with (people from) all walks of life,” Kanesha says of her support for her daughter.

“I was nervous my first time,” Kortnee says of her competitive career to date, “(but) when I finished my first run I got my passion back. Then I just started competing more and more.” But Kortnee’s true joy comes from building a special relationship with her horse, Ramos. “I like feeding him a lot, keeping him healthy, and riding him. He takes care of me!”

Kanesha’s proudest achievement is being the only black woman featured in an Austin museum exhibition with barrel-racing champions and rodeo hall-of-famers like Martha Josey and Charmayne James, both Texas rodeo icons. “If you can win at Texas rodeos, you can pretty much win anywhere,” says Kanesha. “If you’re winning stuff consistently at a Texas level, you can go to California, Arizona or any of those different circuits and dominate.” There seems to be some truth to that: five of the top ten women in the current Women’s Professional Rodeo Association world standings are from Texas.

Kanesha travels the country in her live-in horse trailer, which she calls her “studio apartment on wheels”, with her “hauling partner” Kortnee, so both can compete in various rodeos. She is currently running a horse named Chig, who she has owned for three years. They spent two years bonding before Kanesha rode her in competition. “You have to build trust in the horse, along with you having to trust them,” she says. “It’s a lot of TLC!”

As a black woman in what is largely perceived as a white sport, Kanesha is all too aware that her passion can come at a cost. “You have some girls that are nice to you until they know you’re a competitor, then all of a sudden they become the mean girls,” she says. Rivalry, naturally, brings out competitive nastiness. That said, Kanesha has been navigating these spaces since long before she understood the politics. The BPIR, which exists as a sort of natural corrective to the erasure of the black cowgirl, has been instrumental in making her feel at home as a rider, she says. “I think from being raised with Bill Pickett, and through my mom taking me to different rodeo associations, I was already accustomed to it. I’ve never been anywhere where I felt like I was less than anyone else.”