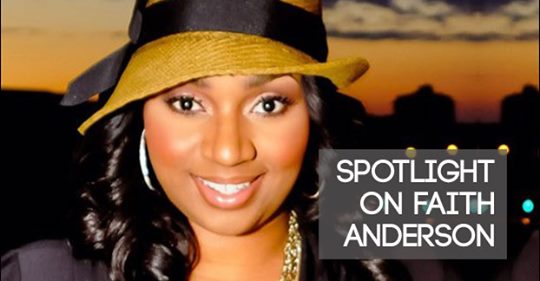 Faith Anderson’s resume consists of singing with a who’s who of Gospel, Christian and mainstream artists. However, that is just the tip of the iceberg of what she does.

Faith Anderson: the spotlight is on you!

This young lady, hailing from Dallas, Texas (by way of Tulsa, Oklahoma) first hit the scene as a soprano on Kirk Franklin’s The Rebirth of Kirk Franklin album. She toured with Kirk for his Hopeville Tour that he headlined with Yolanda Adams and Donnie McClurkin and continued to serve with Kirk as a featured vocalist on his platinum-selling album, Hero. Afterwards, she was doing spot dates with Kirk as a soprano and alto. She also sang on various songs that Kirk Franklin wrote and produced while being a member of Myron Butler and Levi along with singing BGV’s for Myron Williams.

Fred Hammond featured Faith in a duet with Lowell Pye on “You Do Great Things” from his Life in the Word album. She has traveled the globe singing with Kirk, Fred and more. She has performed at The Stellar Awards, GRAMMY Awards and even on a crusade with the late Billy Graham. Faith can also be heard on albums by Tamela Mann, Men of Standard, Juanita Bynum, Yolanda Adams and on Tori Kelly’s Hiding Place.

But Faith is so much more than a powerful vocalist. She is also the owner of Tenth Child Inc, a management and consulting company located in Dallas, Texas. Tenth Child represents many artists and authors and with Faith Anderson at the helm, you are sure to be guided in the right direction. She is trusted and respected by all of the artists that she has sung with and so many more! They are currently representing Will McMillan, Jabari Johnson, Keyondra Lockett and more. Click here to see a gallery of events put on by or sponsored by Tenth Child, Inc.

Faith and Tenth Child, Inc. created The Living Room, an event where award-winning musicians and singers are able to just “shed” on the stage. Many of these singers are part of the cog that makes the biggest names in music work to the excellence that we see during award shows, etc. It can be rehearsed and spontaneous. However, just know that it will be a night to remember. Faith believes in people and she wants the best for them and out of them! We salute you!

There is so much to Faith Anderson and Tenth Child Inc., that you have to follow their social media outlets.

Thanks, Faith, for all you’ve done in the past and for all your doing in the future, to pursue excellence in Gospel music!

Dwayne Lacy is a long time History teacher in Houston, Texas. He also has a passion for diversity in unity in music and in the church.