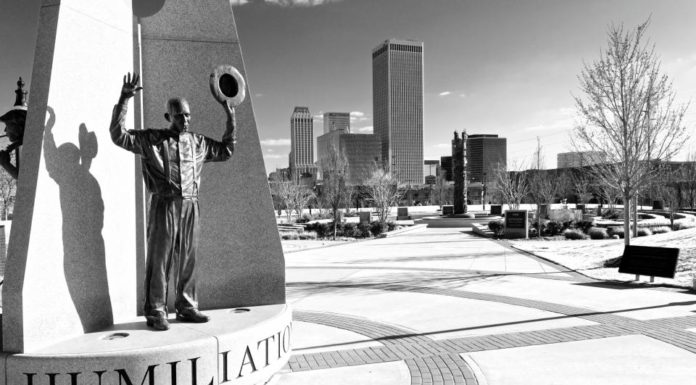 In the weeks after the Tulsa race massacre destroyed much of the Greenwood District, the Tulsa Chamber of Commerce held meetings to discuss a response to the large-scale attack at the epicenter of the city’s largest black community.

Those discussions — held 98 years ago between June 2 to July 1, 1921 — were recorded in meeting minutes that since have not been widely made available to the public.

Contained in those documents, said Tulsa Regional Chamber CEO Mike Neal, is “insight into actions of those at the highest levels of power during our city’s lowest moral point that reveal our organization’s legacy.”

On Tuesday at the Greenwood Cultural Center, the Chamber — saying it wanted to openly address the events of 1921 — donated for preservation a ceremonial copy of board meeting minutes, described as a significant historical document.

“This portion of the minutes is a snapshot of time and by no means an exhaustive telling of the Chamber’s response to the massacre,” said Neal. “We at the Tulsa Regional Chamber are committed to an inclusive Tulsa. We are committed to equitable economic outcomes for all Tulsans, no matter their ZIP code, skin color, sexual orientation or religious affiliation. We must also acknowledge that throughout our organization’s 115-year history, that commitment has not always been the case.”

The move to release the documents was first initiated by former Greenwood Cultural Center employee Bill White, who asked that they be made available leading up to the centennial commemoration of the race massacre.

The Chamber’s board of directors agreed with the suggestion but first sought counsel from city and community leaders, including members of the Tulsa Race Massacre Centennial Commission, before ultimately making the final decision.

“This process has required deep introspection, and our staff and members of our 2018 and 2019 boards of directors have been willing to confront some very harsh realities,” said Neal.

An examination of the minutes found that city leaders blamed black Greenwood residents for the violence and considered plans to take land from Black Wall Street business owners.

Further, the minutes revealed that members recognized the severity of the event, calling it “the greatest wound (to) Tulsa’s civic pride (the city) has ever received.”

Those revelations, present-day Chamber officials say, were a failure by then-chamber leaders to confront the realities of white supremacy and their inaction that ultimately led to suffering in the Greenwood community for generations since.

As a result, the Chamber sought to apologize for its inaction that occurred nearly a century ago.

“We’re sorry that in 1921, our organization did not fulfill its civic and moral obligation to ensure the welfare of all Tulsans,” said Neal. “And we’re sorry that for too long, we did not directly confront how the racism that enabled the massacre also shaped the economic disparities in our community.”

In addition to making the minutes available, the Chamber said it plans to take steps to foster diversity within its in own organization and throughout Tulsa.

The Tulsa Regional Chamber announced it is partnering with Leadership Tulsa’s New Voices program to offer opportunities for minorities at local private companies.

To achieve that goal, Kuma Roberts, executive director of diversity, equity and inclusion for the Chamber, said it has partnered with multiple groups to cultivate support for women and racial minorities in the workplace.

Further, Roberts announced the Chamber’s 2019 Intercity Visit will have a focus on diversity, equity and inclusion through a trip to Minnesota in the fall with the purpose of creating economic equity in Tulsa.

“And with the approaching centennial, the eyes of the world will be on Tulsa,” Roberts said. “It matters to all of us that our city make real strides in racial reconciliation, and the chamber is committed to doing its part.”