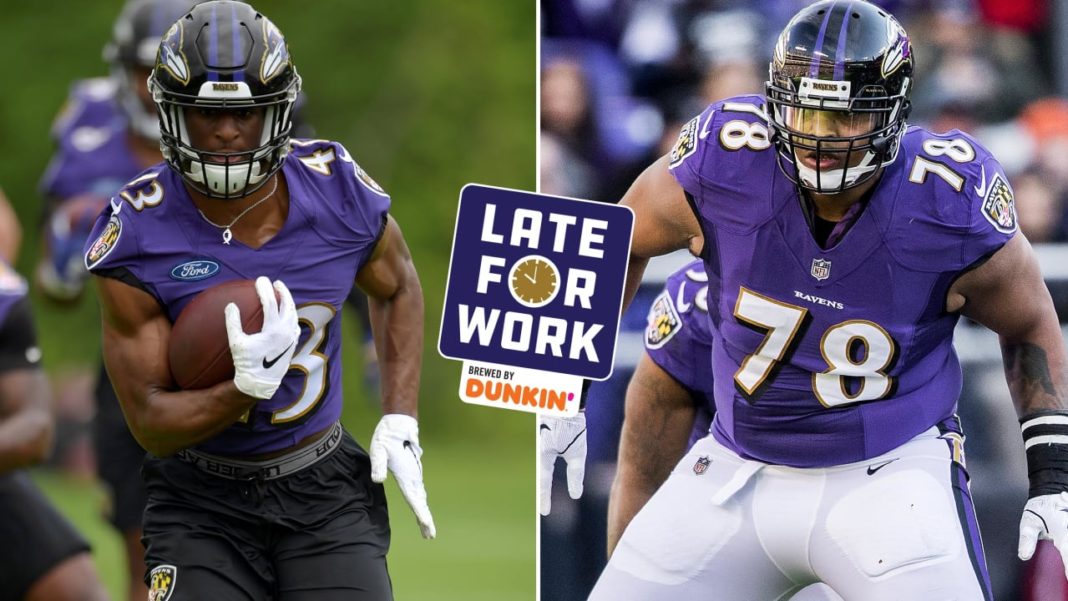 Offensive tackle Orlando Brown Jr. made a significant impact for the Ravens as a rookie last season, and he could be poised for an even bigger 2019.

Bleacher Report’s Brad Gagnon predicted every team’s breakout player for this season, and he went with Brown for the Ravens. Gagnon only considered players who are in years 2-to-4 of their careers and have yet to receive All-Pro or Pro Bowl honors.

“While Ravens 2017 first-round pick Ronnie Stanley could be ready to finally crack the Pro Bowl at left tackle, and more recent first-rounders Marlon Humphrey and Lamar Jackson are expected to get better in 2019, the biggest man on the roster might actually be on the verge of the biggest leap,” Gagnon wrote of the 6-foot-8, 345-pound Brown.

Brown, considered a potential first-round pick in last year’s NFL Draft, fell to the Ravens in the third round (83rd overall) after a poor showing at the NFL Combine. An injury to James Hurst gave Brown an opportunity to start in Week 7, and Brown remained a starter for the rest of the season.

Brown was especially effective in pass protection. His pressure rate allowed of 4.8 percent was eighth-best among all right tackles, according to Pro Football Focus.

“Coming from a third-round rookie tackle, that performance is promising for his future development,” Pro Football Focus’ Ben Linsey wrote.

Gagnon cited Brown’s impressive offseason conditioning as one of the factors in his positive outlook for the 23-year-old son of former Raven Orlando “Zeus” Brown.

Ravens strength and conditioning coach Steve Saunders on Orlando Brown Jr: “If we had a Ravens X-Men, he’d be in it. He’s a freak. He’s a mutant. It’s awesome.”

“Orlando came in here really raw,” Ravens Strength and Conditioning Coach Steve Saunders said last month. “Orlando’s strength gains that he made last offseason and really the whole way through the season. … I couldn’t be more excited to have Orlando here for the whole offseason.”

Another Raven mentioned as a potential breakout player in 2019 is Justice Hill, who Good Morning Football’s Peter Schrager chose as the rookie running back he is most excited to see.

“Justice Hill is your home run hitter,” Schrager said of the Ravens’ fourth-round draft pick. “At Oklahoma State he was an absolute fireworks show. You have your 3 yards and a cloud of dust guys in [Gus] Edwards and [Mark] Ingram, you have the offensive line, you’ve got  the best blocking tight ends in the league and you’ve got a running quarterback. Here’s your home run hitter at running back who you can lateral, you can do a lot of things with.” 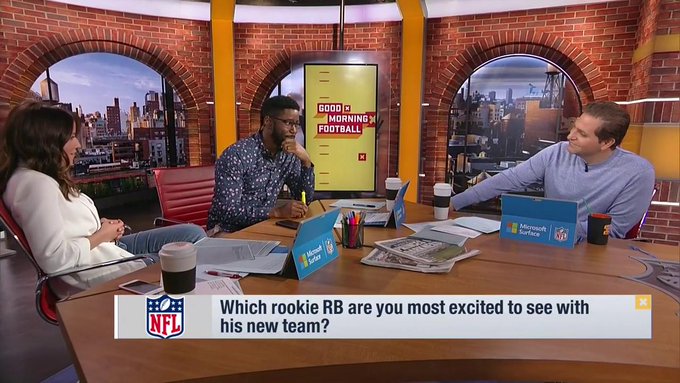 Which rookie running back will have a breakout season?@nateburleson

Jackson had his breakout season last year, and he continues to be a player that pundits believe can reach superstar status this season.

“One of the most exciting young players the league has seen in a while, Jackson took advantage of a Joe Flacco injury last year and never looked back,” Sportsnaut’s Jesse Reed wrote. “Though he was more effective running the ball than as a pure passer, the former Heisman winner did enough through the air to give fans hope he’ll have what it takes to excel there, too. The Ravens did extensive work to upgrade the talent around Jackson, including some exciting draft picks like Marquise Brown and Justice Hill. Combined with a custom-tailored offense to suit Jackson’s strengths, this young quarterback should thrive in 2019.”

Of the five quarterbacks selected in the first round of last year’s draft, Jackson will be the one to win the most games in 2019, NFL.com’s Jeremy Bergman wrote. Jackson (6-1) and the Cleveland Browns’ Baker Mayfield (6-7) led rookie quarterbacks in wins last season.

“There figures to be a logjam atop the AFC North in 2019, but Lamar Jackson’s Ravens still boast a more complete roster and more experienced leadership than Baker Mayfield’s Browns,” Bergman wrote. “It’ll be close, but Cleveland will wilt under the spotlight, and Jackson’s Baltimore squad will come out a game ahead with nine wins.”

Breaking Down the Ravens’ Offense

The Ravens have the 12th-best offense in the league, according to NBC Sports’ Peter King’s rankings. He has them one spot behind the Cleveland Browns.

“The Ravens, who got Lamar Jackson two new receiving toys — Marquise Brown (they’re hoping he can be in the Tyreek Hill-factor league) and Miles Boykin — are a fascinating team to watch,” King wrote. “They could win 11. They could win six. The offense had better score, because the defense has holes.”

As for the other AFC North teams, King ranked the Pittsburgh Steelers 18th and the Cincinnati Bengals 30th.

Baltimore Beatdown’s Frank J. Platko took a more in-depth look at the offenses in the AFC North, as he ranked every offensive position group in the division.

Platko is not as big of a believer in Jackson as other pundits. He has Jackson ranked last, behind Mayfield, the Steelers’ Ben Roethlisberger and the Bengals’ Andy Dalton.

“Until we see how much Lamar Jackson improves as a passer and performs over a full season, Dalton still gets the edge as third-best starting QB in the division,” Platko wrote.

He also ranked the Ravens last at wide receiver, behind the Browns, Bengals and Steelers.

At running back, Platko places the Ravens third (behind the Browns and Steelers), but wrote that “the margin between these teams at the RB position is incredibly slim and one could make an argument for anyone being deserving of the No. 1 spot.”

The Ravens did take the top spot at tight end.

“The Ravens are the team with the best top-to-bottom collection of talent,” Platko wrote. “Mark Andrews had a productive rookie season and Hayden Hurst figures to take a step forward next year with good health. Nick Boyle, arguably the best blocking TE in the league, is also back in the fold.”

At offensive line, the Ravens placed third, behind the Steelers and Browns and ahead of the Bengals.

“Marshal Yanda has long been a premier lineman in the league and Ronnie Stanley took a significant step forward last season,” Platko wrote. “Orlando Brown Jr. has Pro Bowl potential, but question marks at center and left guard keep them at No. 3.”

In the first of a two-part series by The Baltimore Sun’s Jonas Shafer on whether the Ravens upgraded or downgraded each position on their roster, he did not give any position on offense a downgrade. He wrote that quarterback and wide receiver are a push, while the team upgraded at running back, tight end and offensive line.

Perhaps the most surprising aspect of Shafer’s assessments was his take that the Ravens did not upgrade the wide receiver position despite drafting Marquise Brown and Boykin.

“It’s unclear how quickly the rookies will be able to help, or how much,” Shafer wrote. “Here’s what rookie receivers drafted among the top 93 picks — a range set by where Boykin was taken — have averaged over the past three years: 511.2 receiving yards per game in 2018, 320.5 in 2017, 408.9 in 2016. In that group are injury busts, victims of bad quarterback play, and receivers who just weren’t or aren’t very good. But that’s the risk teams take in the draft.”

Looking at the Ravens-Oklahoma Connection

With the Ravens selecting two players from Oklahoma in this year’s draft (Marquise Brown in the first round and guard Ben Powers in the fourth) and two last year (Mark Andrews and Orlando Brown Jr. in the third), it’s obvious the organization has an affinity for Sooners offensive players.

“If all four end up starting this season, that would mean over one-third of the Ravens’ offense contributed to an Oklahoma attack that scored 172 touchdowns over the past two seasons — 13 more than any other FBS team,” ESPN’s Jamison Hensley wrote.

Ravens Director of Player Personnel Joe Hortiz said: “The mentality they create there, the offensive style they’re running, that fits what we’re doing here in Baltimore. So, I think that plays into it. But it’s really just opportunity meeting our draft board, and it’s just worked out great for us. We certainly love the mentality they come in with, so we’re going to keep shopping there hopefully.”