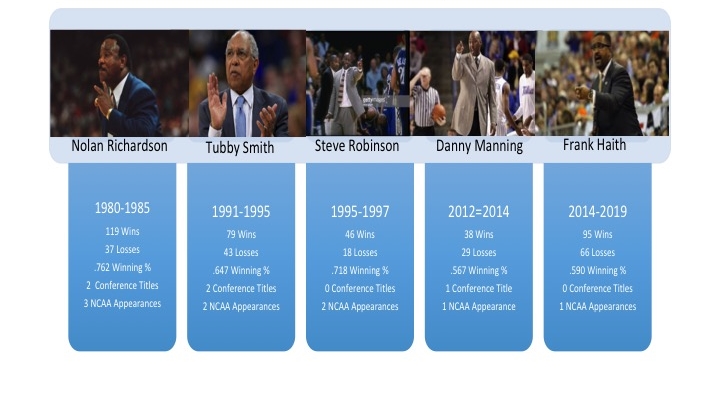 Over the past several months a prominent member of the Tulsa media has had a clear agenda when it comes to covering the University of Tulsa athletics department. While certain sports are given a free pass despite underwhelming, on-field performances, men’s basketball head coach Frank Haith and Director of Athletics Dr. Derrick Gragg, both of whom are Black, have been placed directly in the crosshairs of a certain columnist’s keyboard.

Whatever the purpose of these repeated attacks on Haith and Gragg, the facts simply do not support his disingenuous narrative.

In 2014 Tulsa joined the American Athletics Conference, giving TU a platform and conference competition the likes of which it has never been associated. A longtime conference drifter since leaving the Missouri Valley in the mid 80’s, Tulsa has looked for a place to call home, while competing for statewide relevance against larger, more enrollment-driven programs Oklahoma and Oklahoma State.

Sure, we remember the days competing downtown as a member of the WAC against Hawaii, Fresno State and Utah. Those were great names and programs at the time. We loved when Tulsa formed rivalries in the Missouri Valley against Wichita State, Bradley, Illinois State, etc., but this move to the American was a chance to escape conference irrelevance and take a major step to share our entire city’s brand on a more national platform.

It was a bold move for Gragg and then University President Steadman Upham to make. Tulsa was more in line financially with former Conference USA mates Florida International, Middle Tennessee and UTEP. It definitely had more in common academically with Rice.

But Tulsa’s gamble on itself and its move to bring Haith to Tulsa from the University of Missouri has been rewarded with strong competitive performances including an at-large berth to the NCAA Tournament for the first time in decades. Now Tulsa has a record-breaking television contract to help ease some of the mounting financial tension on campus and its greater university presence nationally gives TU a chance for TU to do what it does best, recruit the country’s best and brightest to Green Country.

This leads me to another disappointing narrative by the columnist – Haith doesn’t recruit Oklahoma. The caveat of “high school” is a convenient one. It’s true. Tulsa hasn’t signed a high school recruit from Oklahoma, but it’s not like he has ignored the state. Keyshawn Embery-Simpson committed to Tulsa last week after spending his freshman season at Arkansas. Tulsa recruited the Midwest City native heavily. He went to the SEC. He is now back at TU. He is a Golden Hurricane. Curran Scott went to Charlotte. His diploma will say the University of Tulsa. DaQuan Jeffries won the Slam Dunk title on ESPN. His uniform said Tulsa. Check your manufactured outrage at the door. There are Oklahomans on the roster and more on the way.

Haith has been the only men’s basketball coach at Tulsa since it moved from C-USA to the American in 2014. This year the AAC was ranked the sixth strongest conference nationally by the RPI, ahead of the Pac 12 and just behind the BIG EAST.

Tulsa is in a basketball conference stronger than the Pac 12 and just went 2-0 against members of the Big 12 this year, beating Oklahoma State and Big 12 Champion Kansas State in the same week.

TU’s old partner, Conference USA, was the 13th most difficult league in the country this year placing behind the Mid-American Conference, the Ivy League and the Southern Conference. The Missouri Valley was behind C-USA. This is new territory for TU and the basketball program is competing well. With the stability of Haith’s new contract, Tulsa has some very bright days ahead.

On the flipside in college football, the American is ranked eighth (of 11) for its strength. And may I remind you there is no BIG EAST in Division I football.

Yes, UCF has done wonders for the AAC in football. I love the program’s brash in-your-face attitude of taking on all comers. But Tulsa hasn’t played UCF these last two years on the gridiron and I look forward to seeing the Golden Hurricane play the Golden Knights next season.

Make no mistake, the American is first and foremost a college basketball conference.

Since Haith took over the TU program the Golden Hurricane is among the Top 5 in the league in wins (just a handful of wins away from the Top 3) and has outpaced league projections every year at the helm of the program.

Tulsa obviously doesn’t have the university or department-wide resources of its other league counterparts, yet men’s basketball has routinely beaten Connecticut (four NCAA National Titles) and Temple (fifth all time in NCAA history for wins) among many others.

Yet have you ever heard Gragg or Haith speak out about what TU doesn’t have as far as resources or enrollment? Tulsa has the smallest enrollment of any AAC program. With that comes the smallest living alumni base. This columnist rushes to condemn Gragg for not having an indoor football facility, but will not show other sports including softball, track and cross country thriving on the campus without fancy accommodations.

This columnist would have you believe the financial issues crippling TU lie solely at the feet of TU’s AD. In stories about the football program, Gragg and the TU administration are singled out as the root of an attendance problem. In a recent column about Haith’s contract extension, the head coach was blamed for the basketball attendance. How can the AD be blamed for football attendance, but the basketball coach, who has won a significantly higher percentage of games, be to blame for his? There is only one common denominator.

The fact is college athletics attendance is down all over the country. It’s an unfortunate byproduct of every game being televised, but that problem has also handed TU an important financial win with the signing of the AAC’s TV deal.

Tulsa has problems. Every University has sticking points and areas for improvement, but the men’s basketball program is in good hands. The team is winning at a higher rate than the rest of the league believes it should (based on preseason predictions). The team reportedly broke a school record for GPA and its seniors graduate.

Just stop the agendas. It doesn’t help anyone, and it certainly hurts the credibility of this media member and his outlet.