On Tuesday evening, Tracy Baton stood on the steps of the Sixth Presbyterian Church — the same church where Mr. Rogers worshipped for many years — and spoke to a crowd of thousands.

“When Mr. Rogers came to Pittsburgh in the ’50s, he found a neighborhood full of values, full of Jewish values, and he took them forward and shared them with the world,” she said as the sun set over Squirrel Hill, the place she was raised. “Pittsburgh values matter everywhere now.”

Those who “would insert themselves on a national stage, into a city in mourning, before the dead are buried, is unacceptable,” she continued. “Those that would limit our neighbors’ vote, that would foment hate against the Jewish community, Muslim community, people of color, LGBTQ people, as well as wage a war on women’s bodies, are not welcome here!”

The crowd cheered on Baton, director of the Pittsburgh chapter of the Women’s March on Washington. They all knew whom she was referring to: About an hour earlier and only a few blocks away, President Donald Trump’s motorcade had left the synagogue where a white supremacist slaughtered 11 people Saturday. It was part of Trump’s three-hour photo-op in a grieving city where most of the residents, it seemed, had never wanted him to come at all.

Mayor Bill Peduto (D) implored the president not to come until after the victims’ funerals were complete, saying “all attention [Tuesday] should be on the victims.”

But the president came here anyway, to a city reeling from white nationalist violence, and he did so just hours after it emerged that he is considering using an executive order to end birthright citizenship in the U.S., a white nationalist proposal.

When he arrived at Tree of Life synagogue, he and first lady Melania Trump talked with one of the temple’s three rabbis, Jeffrey Myers, one of the few people who had agreed to meet the president. The Trumps laid flowers on 11 makeshift Star of David memorials erected outside the building, each honoring a different victim. Trump had, in essence, already blamed the synagogue for their deaths, arguing just a few hours after the shooting that worshippers would have been protected if the synagogue had armed security guards.

“We have people who can’t sit shiva because you’re blocking our streets!” the Rev. Susan Rothenberg, a Presbyterian minister who lives a few doors down from the synagogue, screamed at the president when he arrived. “These people can’t grieve! You’re causing them pain!”

There were thousands of people mourning and marching through Squirrel Hill Tuesday who shared her sentiment.

It all started at 3 p.m., with a protest and shiva — a ritual mourning of the dead — organized by the Jewish group IfNotNow. A hundred or so people formed a circle at Murray Avenue and Darlington Road. 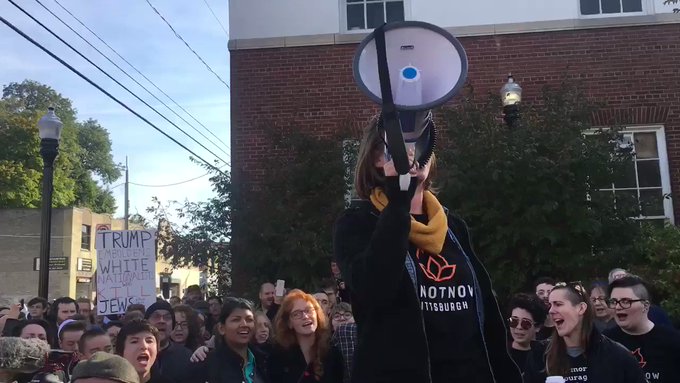 Singing “we will build this world with love!” #Pittsburgh

They sang songs ― “Olam Chesed Yibaneh” and “Ozi V’Zimrat Yah” — and held one another, often crying onto others’ shoulders. They recited the mourner’s kaddish. At the end, a man and a woman blew three times into shofars — ram’s horn trumpets used in Jewish ceremonies — which this time, they said, signified their promise to fight white supremacy.

Part of that promise for Clarke on Tuesday was to tell the country, and the world, that the president of the United States was not welcome in Pittsburgh.

“I think that Donald Trump represents white nationalism and white supremacy, and that has no place in the mourning lives lost to exactly those systems that his administration upholds,” Clarke told HuffPost.

At Beechwood Boulevard and Forbes Avenue, meanwhile, thousands of other protesters started to gather. This was the protest organized by the Pittsburgh chapter of Bend The Arc, a Jewish social justice group.

“The gunman who tore apart our neighborhood believed your lies about the immigrant caravan in Mexico,” the group wrote in a message to Trump on its website. “He believed antisemitic lies that Jews were funding the caravan. These are all things you and your party have claimed, without evidence, things that drove this madman to take his anger out on peaceful, sabbath-observing Jews.”

For this reason and others, they organized Tuesday’s protest against Trump’s appearance in their city. Whole families arrived. One woman — who’d grown up going to Tree of Life synagogue — traveled here from Chicago to participate. When it came time to march, there were thousands of people walking through Squirrel Hill.

They walked slowly and solemnly, carrying banners that read “Refugees Are Not Invaders,” “Pittsburgh Builds Bridges Not Walls” and “Pittsburgh Welcomes All Who Don’t Hate.”

They, too, sang “Ozi V’Zimrat Yah” and eventually merged with the IfNotNow group, which was singing the same song. They all marched toward Tree of Life.

About a block from the synagogue, where the road was blocked by police, they performed the keriah — a Jewish mourning ritual that involves the tearing of a piece of clothing. In this case, the protesters tore small pieces of black paper. They held the pieces of paper in the air. For a while, they stood in perfect silence, save for the few who couldn’t help but weep.

Then the singing started with “Ozi V’Zimrat Yah” again, the pace quicker this time and the volume growing louder, loud enough maybe for the president to hear. 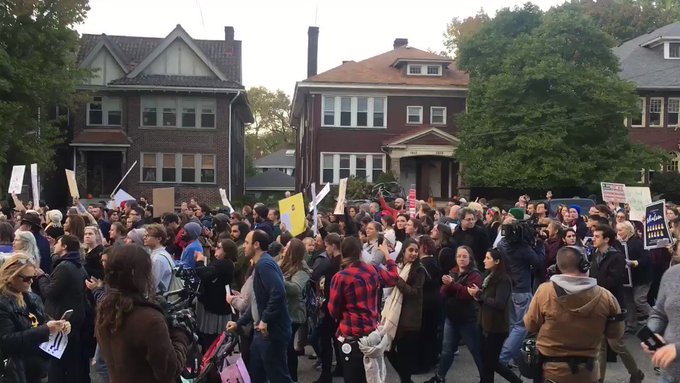 Protesters clapping and cheering and screaming thank you to #Pittsburgh fire department company 18 as they walk by. This is one of companies that first responded to the massacre at the synagogue.

The march continued, past Pittsburgh Bureau of Fire’s Quint Company 18, which first responded to the massacre Saturday. The protesters cheered and clapped and some yelled “thank you!” at the firefighters and police officers standing outside.

Then it was on to the Sixth Presbyterian Church, Mr. Roger’s church, where they stood on the street outside as the sun set, listening to a series of speakers and occasionally breaking into chants of “Vote! Vote! Vote!”