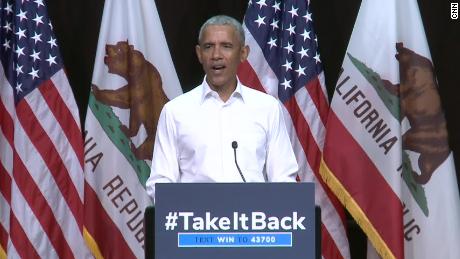 It was only a matter of time before Democratic rising star Andrew Gillum and former President Barack Obama‘s path’s crossed.

Monday, it was announced that Obama is scheduled to stump with Florida’s two top-of-ticket candidates, Gillum and U.S. Sen. Bill Nelson, in Miami on Friday, which is only four days before the November 6th elections.

Donald Trump will also be headed to the Sunshine state this week to back his own candidates, with a visit to Fort Myers with GOP nominee Ron DeSantis and Gov. Rick Scott.

According to the Miami Herald, “The rallies by the parties’ figureheads come as out-of-state megadonors pump millions into the governor’s race and Democrats beat the bushes to help Nelson keep up with the independently wealthy and self-funding Scott. In the nation’s largest swing state, the parties are going all out during an election that feels like a precursor to the 2020 presidential campaign.”

Gillum, who currently serves as the mayor of Tallahassee, has often been compared to Obama, and like the former president is running a campaign that relies heavily on the audacity of hope.

If he wins, he would make history as Florida’s first black governor and last Wednesday, he called out his opponent, GOP nominee Ron DeSantis for fraternizing with racists intent to treat the color of his skin like a liability.

“First of all, he’s got neo-Nazis helping him out in this state,” Gillum pointed out, referring to a white supremacist group that is running racist robo-calls against him.

“Now, I’m not calling Mr. DeSantis a racist, I’m simply saying the racists believe he’s a racist,” he declared to raucous applause from the debate audience in attendance.

As my grandmother used to say — a hit dog will holler.

READ MORE: Is Andrew Gillum the ‘Woke Obama’ we’ve all been waiting for?

“I’m proud and humbled to have President Obama, my friend and a true patriot, on the campaign trail here in Florida,” Gillum said in a statement about this week’s visit.

“President Obama knows what’s at stake in this election — protections for people with pre-existing conditions, funding for public schools, and leadership to restore our environment.”

What our state and country needs is decency, hope, and leadership. If you agree, join us at http://AndrewGillum.com . Also, @ me next time, @realDonaldTrump.

Not only did Congressman Ron DeSantis easily win the Republican Primary, but his opponent in November is his biggest dream….a failed Socialist Mayor named Andrew Gillum who has allowed crime & many other problems to flourish in his city. This is not what Florida wants or needs!