Thousands of people remember driving to south Tulsa’s Mabee Center in April each year to attend the enormous Azusa Conferences hosted by Higher Dimensions Church and its world-renowned pastor, Carlton Pearson in the 90s and early 2000s.  For years, Azusa was a major attraction for the black religious community, drawing crowds locally, nationally, and from around the world.  It’s been more than fifteen years since the last Azusa Conference was held at the Mabee Center.  For many, it’s still hard to believe that Azusa is no more and that Higher Dimensions Church no longer exists. 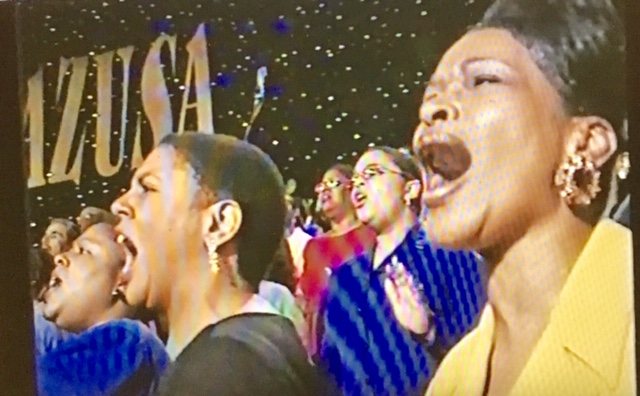 While the church and the conference are gone, the memories are alive and well.  The impact of Higher Dimensions–which launched numerous ministries throughout the United States–is still felt.  Co-authors Cassandra McClellan-Austin and Teresa Reed were long-time members of Higher Dimensions and sang and recorded with its famous choir.  They witnessed the glory days of the church, and they saw, at close range, the fallout of Carlton Pearson’s change in belief.  They were there when the property went into foreclosure, and were there when the congregation officially dissolved in 2008.  In their forthcoming book, “Beneath a Heretic’s Wings”, they tell their story. “This story has been sitting in my heart for years now,” McClellan-Austin said.  “Sharing my perspective has brought closure for me in a way that I didn’t know I needed.”

Earlier this year, Netflix released the movie “Come Sunday”, which depicts Carlton Pearson’s ministry and change in belief.  While Pastor Pearson was the focal point of the movie, many lives were transformed by the events surrounding the decline and death of Higher D.  “Higher D was more than a church; it was a big, diverse, spirit-filled family,” Reed said.  “Even after the family members have gone their separate ways, the roots remain.”

The co-authors will host a book launch on Friday, November 9th at 7 p.m. at Tulsa Central Library’s Aaronson Auditorium.  They will read excerpts, hold a brief Q&A, sign copies of the book, and serve light refreshments.  The event is free and open to the public.