Authorities have intercepted several suspicious packages that were sent to left-leaning, centrist or Democratic political figures as well as two media outlets on Wednesday, prompting nationwide alarm in a divisive political climate that some say is the reason for the threats.

“The packages were immediately identified during routine mail screening procedures as potential explosive devices and were appropriately handled as such,” the Secret Service said in a Wednesday statement.

However, similar devices were sent to offices of former attorney general Eric Holder, and Florida Rep. Debbie Wasserman Schultz, along with a San Diego building that housed offices of Sen. Kamala Harris and the San Diego Union-Tribune. A Maryland Congressional mail screening outlet also intercepted a device which was addressed to California Rep. Maxine Waters, according to Los Angeles’ KABC.

Waters responded to the threats through a statement: “I am appreciative of the law enforcement entities who intercepted the package and are investigating this matter. I unequivocally condemn any and all acts of violence and terror.”

In addition, a live pipe bomb a long with an unknown white powder was discovered at the CNN Center in New York, causing the building to be evacuated. The device was addressed to former CIA director John Brennan with Schultz’s office used for a return address, as it was on the other packages. The device that showed up at her office was returned from Holder’s office because it was a wrong address.

Earlier this week a pipe bomb was also sent to the home of Democratic donor billionaire George Soros. The U.S. Secret Service said that rumors of a device being sent to the White House were false.

A suspicious package arrived Wednesday at a Manhattan office of New York Gov. Andrew Cuomo, but officials said it was unrelated to the others.

None of the devices detonated and no injuries were reported. Law enforcement officials say they are investigating whether they were sent by a single person or a more than one.

At a press conference, New York mayor Bill de Blasio called the incident an attempt to intimidate and encouraged New Yorkers to continue about their daily business. “What we saw here today was an effort to terrorize. This clearly is an act of terror attempting to undermine our free press and leaders of this country through acts of violence,” he said. 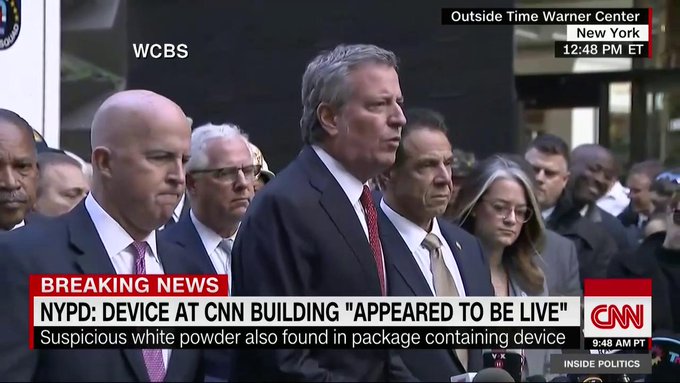 New York City Mayor Bill de Blasio: “What we saw here today was effort to terrorize. This clearly is an act of terror attempting to undermine our free press and leaders of this country through acts of violence.” https://cnn.it/2PgWIKC

While it is unclear who sent the packages, and no suspects are in custody, social media speculation is high that the person or persons likely targeted left wing or Democratic politicians or outlets that have been critical of President Trump. Each of the recipients are consistent targets of conservative pundits and most have been verbally attacked by Trump. The hashtag #MAGABomber was trending on Twitter Wednesday afternoon.

All people that lean to the left, all people @realDonaldTrump has targeted.

Don’t listen to the “false alarm” lies. The #MAGABomber clearly aimed to attack the left.

READ MORE: Facebook poll asked if Obama should be killed

Clinton, speaking at a rally in Florida, flatly condemned the incidents and praised the Secret Service. “It is a time of deep divisions and we have to do everything we can to bring our country together,” she said.

At the same time, Republicans also condemned the act. On Twitter, House Majority Whip Steve Scalise of Louisiana called the attempts “beyond criminal,” and demanded justice. “Those responsible for these evil acts of terror must be hunted down and brought to justice, and I have great confidence that our law enforcement officers will succeed in that mission.”

At a public appearance Wednesday afternoon, Trump spoke briefly about the incidents, vowing to bring down the perpetrators.

“The full weight of our government is being deployed to conduct this investigation and bring those responsible to justice,” he said. “We will spare no resources or expense in this effort.” 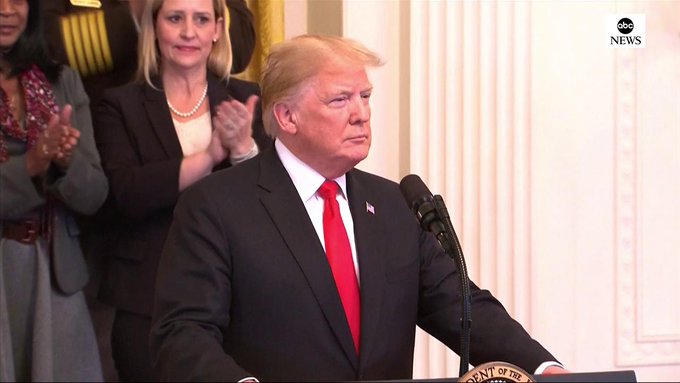 Pres. Trump: “A major federal investigation is now underway. The full weight of our government is being deployed to…bring those responsible for these despicable acts to justice. We will spare no resources or expense in this effort.” https://abcn.ws/2EIIVIE 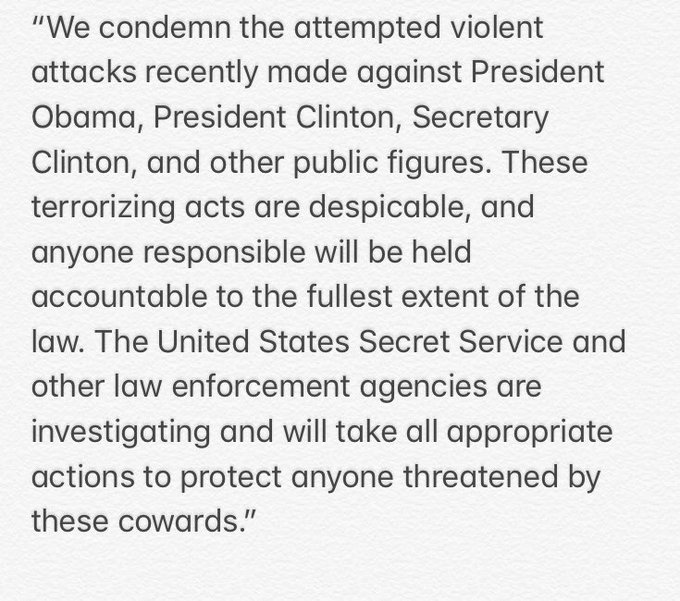 Note: This story has been updated.