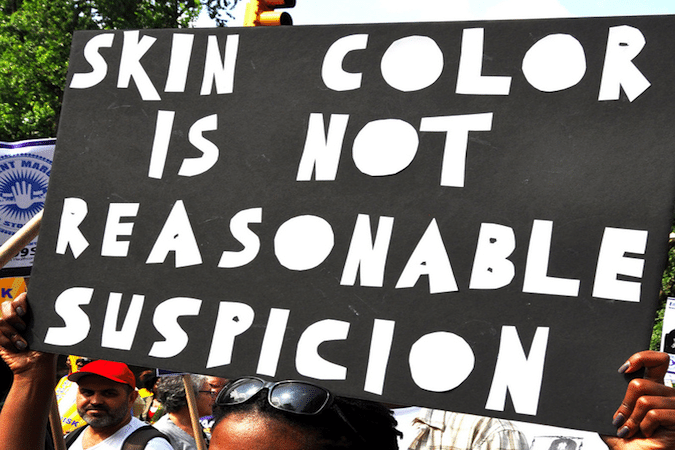 Essentially Lyndo Jones was murdered by a Dallas policeman last year for getting in his own truck, this week the trial begins where former Mesquite officer Derick Wiley who prosecutors say shot Jones who had his hands up in the air begging for his life before he was shot twice in the back as he walked away.

Fortunately, Jones survived his wounds. Jones is an African American and so is Wiley. Wiley was fired for violating use-of-force policies. The shooting happened November 8th last year after neighbors reported that someone was breaking into cars. Wiley used the common police excuse of fearing for his life. Jones was unarmed. Jones has also filed a civil lawsuit because of the multiple surgeries he has had to suffer because of being shot. A body cam recorded the shooting and was shown to a jury.

Fear of arresting African American males seems racist on the surface and could be tied to several aspects. Media reports continue to portray the young African American male as the face of violent drug use in America. In truth most drugs are ingested my white Americans and more drugs are bought and sold in White neighborhoods. Police continue to concentrate on black neighborhoods. Movies either glorify or only view African Americans as dealers and shiftless users of illegal substances. If all this has some role in over reactions in police stops, we need to voice our concerns over unwarranted violence toward black males.

White supremacist are on the rise in number and in incidents. From deep south cross burnings to television. Last week the United States Coast Guard removed a member from its ranks when the unidentified serviceman flashed the white power sign while a news crew film a segment. The sign is essentially an Okay sign with your fingers.

The sign has gained popularity in recent years and has been used often by White Supremist Richard Spencer. Some social media activist wondered if attorney Zina Bash flashed the sign while sitting behind Supreme Court nominee Brent Kavanaugh during his hearings. Bash and her husband strongly denied that was what Bash was doing. Of course, what else were they going to say?

Texas seems to be suffering many racial incidents and from some surprising places and people. An East Texas school superintendent thought he was writing on a private message and instead posted that “you can’t count on a black quarterback. “Lynn Redden is the superintendent who wrote the unsavory comment has come under intense pressure to step down. Although he took down the tweet and said he regrets the comment, it seems he can’t seem to stop himself from making matters worse. He was upset with the play of Houston Texan quarterback Deshaun Watson and said he supported his comment because of the limited success of black quarterbacks in the NFL.

For anyone to say this shows an abundance of ignorance and lack of racial sensitivity. The school was to decide his faith in a school board meeting. Hoping here he is removed because it was wrong, and he created a lot of damage because of his audacious comments.

It seems there are more unwritten laws broken by African Americans everyday in the era of Trump. Shelia Stubbs who is running for state assemblywoman in Wisconsin committed the crime of campaigning while black. In this case she was knocking on doors in her district to garner votes. The all too common caller to police said a strange vehicle was in his neighborhood and the woman driving the vehicle was probably looking for a local drug house. Police responded and asked her what she was doing and asked for proof she was really campaigning. Stubbs said she had a voting list and was going to those homes where there were registered voters. The female officer apologized. This isn’t a rare event for black female candidates. In July of this year, Janelle Bynum who is is running for re-election as a state senator in Oregon was stopped and questioned. She asked to meet the person who called. The police contacted the caller and asked if she would be willing to meet with Senator Bynum. The met and the caller apologized for her call. Stubbs didn’t get to meet her caller, but she did say if they were listening she wanted them to know she made it. She won her race and will take seat in January of 2019.

The ongoing drama of Brent Kavanaugh being confirmed to sit on the United States Supreme Court is in jeopardy because of allegations he sexually assaulted Christine Blasey in high school. Republicans are wanting a quick vote to get Kavanaugh on the court in the hopes he will defend President Donald Trump in any actions that land in the highest court. He has a history of supporting an all-powerful president who cannot be charged with any crime. He is also anti Indian and has conflicting positions on abortion laws. Republicans are opposed to letting the FBI investigate because it might take too long and may come up with damaging evidence. A loss may will mean a trip to jail for many in the white house. A loss could be the final nail in the Trump presidency.

Hill faced a similar predicament with President George H. Bush wanting to place a republican on the highest court. But, not so fast, Anita Hill a Oklahoma University professor was asked to testify over allegation Thomas was sexually inappropriate. The testimony was graphic and gross. In the end Thomas was confirmed despite strong testimony from Hill. Most people believed Hill but it matters only what all white males thought. Hope history doesn’t repeat itself. The idea of two men with questionable and perhaps sexually inappropriate behavior in their history voting on women’s issues before the supreme court is so troubling. The crude pair are thought to be most likely to assist Trump should his removal from the presidency is ever brought before the highest court. History repeating itself can sure be cruel.