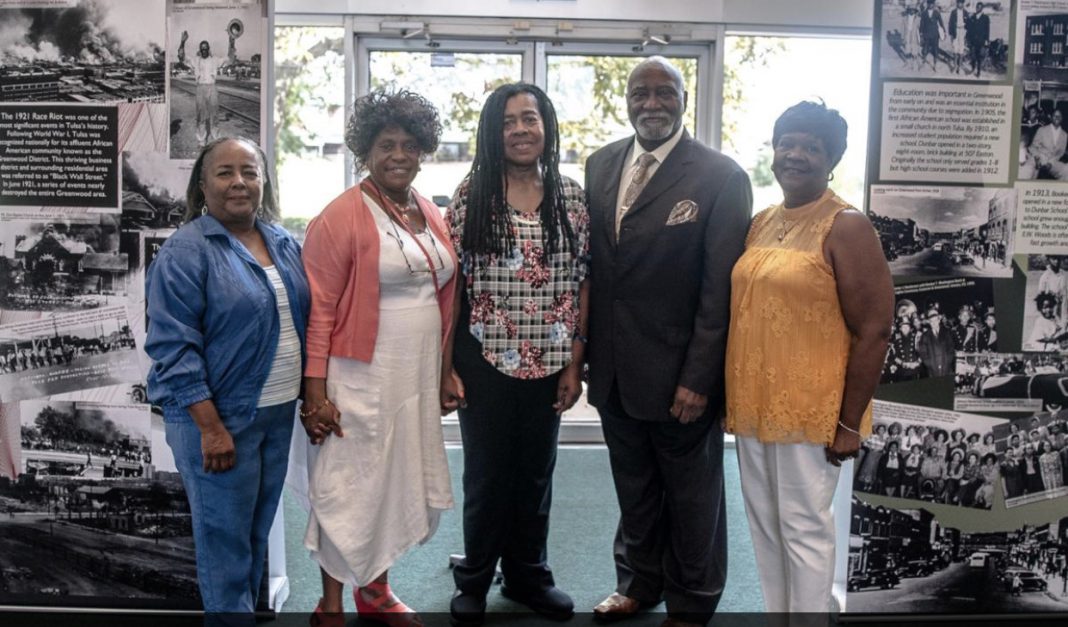 When Vivian Clark-Adams arrived at McLain High School in the mid-1960s, she was one of just 12 black children in her class of 455 students.

“Our family moved into what was primarily a white neighborhood in north Tulsa,” Clark-Adams said. “The neighborhood was transitioning to integration. So was the school.

“It wasn’t always pleasant, but it was a very exciting time, too. There was so much happening, so much change in our nation and in Tulsa when I became a senior in 1968.”

A 50th reunion of the class of 1968, for graduates of Booker T. Washington, McLain and Central high schools, will be held Sept. 16-22 at the DoubleTree by Hilton in downtown Tulsa.

“Honestly, my memories of my community in north Tulsa are mostly warm and fuzzy,” said Tanara Reagan Bowler, a Booker T. Washington graduate and retired teacher. “I can remember there was so much going on in north Tulsa. There were stores on both sides of the street anywhere you went. There were grocery stores, diners, clothing stores, skating rink, bowling alley. You name it; we had it up there.

Not only was 1968 a momentous time in U.S. history, but it was also significant in Tulsa. It was the first year Tulsa Public Schools integrated its teaching staffs.

Marvin McQuarters was in his senior year at Booker T. Washington High School in 1968.

“It was a big deal because suddenly we lost some of our favorite teachers to other schools in the city, and now, we had some white teachers,” said McQuarters, a retired postal worker. “It was an adjustment. It was different.

“I went to primarily black schools from kindergarten through college (at Langston). So, for me, that stands out in my memory. A lot of important things in our country’s history were going on in 1968, but I still remember all of a sudden we had white teachers.”

“I was in political science class, and I remember some students laughing and others saying they were glad he was dead,” Clark-Adams said. “I was very angry. Then, Bobby Kennedy was assassinated (June 5). So my memory of my senior year in high school is kind of bittersweet. There was a lot of good, and there was a lot of bad.”

Doris Marshall was in school at Central when King died. “My mom called,” Marshall said. “All I remember is that there were some people who were happy.”

The peace movement against the Vietnam War was raging, and major civil rights marches were held across the country.

The first black power salute was seen on worldwide television during the 1968 Olympics when black Americans Tommie Smith and John Carlos raised a fist on the medal stand after winning medals in the 200-meter sprint.

“I later met Tommie when I lived in Los Angeles, and it moved me,” said Clark-Adams, an adjunct professor at Tulsa Community College and former instructor at the University of Tulsa. “There was just a lot going on in 1968.”

Gail Anderson had hoped to join her friends in high school at Booker T. Washington. But a rezoning of school borders within the district sent her to Central High School her sophomore year.

“We had to catch a city bus from our neighborhood to go downtown and then walk over to the school,” Anderson said. “There were 1,200 students in my sophomore class. It was a huge school. There were students from all types of backgrounds. It was sort of culture shock for us.

“I had already been exposed to a lot of it. When we moved, we moved into a neighborhood (near John Burroughs Elementary School, 1924 N. Martin Luther King Jr. Blvd.) with just two black families.

“I remember being in the second grade, and I was scared to go to school. I have a memory of my brother, who was in kindergarten at the time, and we were holding hands being very scared. Kids threw rocks at us. Parents chanted, ‘Two-four-six-eight, we don’t want to integrate.’

“It got better, and a lot more black kids came to our school. But it was such a pivotal time in all of our lives. 1968 was full of so much change.”

“I really wanted to go to school at Booker T. because that’s where all of my friends were going,” Marshall said. “I ended up at Central because it was sort of the start of integration.“Everything seemed to be in transition. You had black students who had been behind the lines that were now suddenly on the front lines. There was just so much change going on.”

McQuarters, who comes from a famed north Tulsa athletic family, said he grew up in a family of nine children in a neighborhood close to Booker T. Washington High School in the 1960s.

His family and friends all went to the same schools. Then he went to Langston.

“So when I joined the Air Force, it was my first real experience with white people,” McQuarters said. “I was in a group of 50 guys when I got to boot camp, and I was the only black guy.

“I had lived in this little community of people just like me, and I was always sort of shy and quiet. In the Air Force, I had to learn to speak up for myself.”

Bowler said she seldom left her north Tulsa neighborhood. However, she remembers a shopping trip to downtown Tulsa when she was 5 years old.

“My mother came over and got me. We went right home. My mom never explained to me what happened. I figured it out many years later. It was a different era.”

Bowler spent 35 years working in speech therapy, including a period when she taught English to Vietnamese children at the end of the Vietnam War.

Marshall spent her career in Los Angeles, Austin and Tulsa in recreation and banking.

Adams spent her career in college administration in the Tulsa area.

Anderson worked in laboratory research and banking, some of it in Washington, D.C.

“It was a strange time,” Anderson said. “We were old enough to know some of the Black Wall Street survivors, and we heard their stories. We became involved in what was going on in Tulsa and around the world. We were undergoing something similar in Tulsa to what was happening in the world.

“It was the civil rights era. We had some struggles and some losses, but it was changing.”

Bowler said she misses the sense of community she felt growing up in north Tulsa.

“This community was bonded together,” she said. “You never walked down the street without speaking to everyone you saw.

“I guess that’s what I’m looking forward to the most for the 1968 class reunion. I want to say hi to everyone. We all had experiences in 1968. We understand how it was. It’ll be great to see people that had the same experiences.”