It’s been an active couple of days for former San Francisco 49ers quarterback Colin Kaepernick. A week after becoming the face of Nike’s latest ad campaign, the 30-year-old decided to sell some jerseys for a good cause. 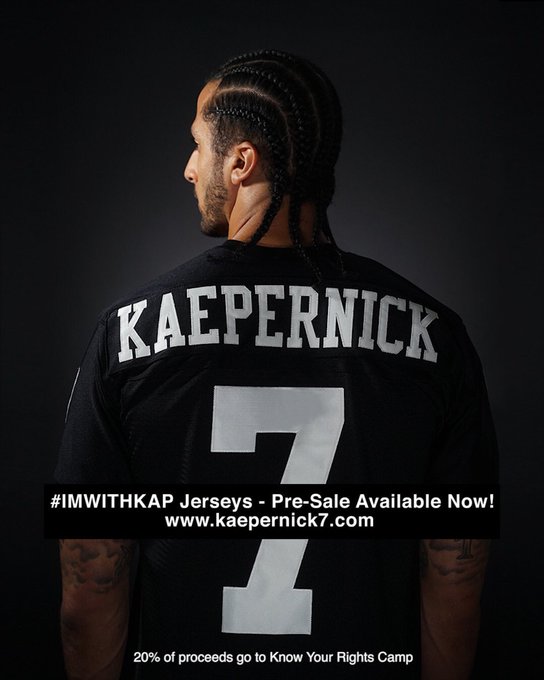 Official #IMWITHKAP Jerseys available for PRE-SALE now! Limited Edition. 20% of all proceeds go to @yourrightscamp. Thank you for your continued support! Shop at http://kaepernick7.com . Link in bio.

That pre-sale didn’t last long. The jerseys sold out just hours after Kaepernick made the announcement.

Demand was high, and Kaepernick knew it. Kaepernick’s new Nike ad may have made some angry, but a fair amount of people said they were more willing to buy from the company after seeing his commercial. That’s exactly what happened, as the jerseys quickly sold out.

More importantly, Kaepernick is donating the proceeds from the jerseys to the the Know Your Rights Campaign. He initially posted that 20 percent would go to the Campaign in his tweet, but Kaepernick’s Instagram says all proceeds will benefit the foundation.

What is the Know Your Rights Campaign?

It is a “free campaign for youth founded by Colin Kaepernick to raise awareness on self-empowerment,” according to the Know Your Rights Campaign’s website.

Where can you purchase ‘#ImWithKap’ jerseys?

What’s next for Colin Kaepernick?

Kaepernick will continue his fight against the NFL. The league’s attempt to dismiss the case was denied by a judge, meaning Kaepernick’s grievance can proceed.

Until then, he’ll continue raising and donating money to social justice campaigns and tweeting support for NFL players who continue to kneel.

Chris Cwik is a writer for Yahoo Sports. Have a tip? Email him at christophercwik@yahoo.com or follow him on Twitter!