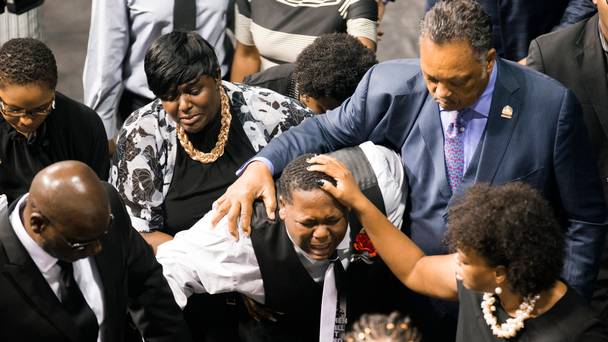 By Joshua A. Krisch

Grief is both real and measurable. Scientists now know that the death or your father or mother will forever alter your brain chemistry and may also have physical effects.

Losing a parent is the closest thing humanity has to a universal emotional experience. But universality doesn’t dampen the trauma of the event, which tends to inform and affect the rest of peoples’ lives. Even under the best circumstances, studies suggest that losing a parent changes an adult both psychologically and biologically. Under more trying circumstances, those changes can become pathological.

“In the best case scenario, the death of a parent is anticipated and there is time for families to prepare for the loss, say their goodbyes, and surround themselves with support,” Dr. Nikole Benders-Hadi, a psychiatrist with Doctor On Demand told Fatherly. “In cases where a death is unexpected, such as with an acute illness or traumatic accident, adult children may remain in the denial and anger phases of the loss for extended periods of time…[leading to] diagnosis of Major Depressive Disorder or even PTSD, if trauma is involved.”

No number of brain imaging studies or psychological trend analyses can truly capture the unique experience of grief. But there are a handful of constants in the scientific literature because all fully developed human brains are wired to respond to emotional pain with the same basic pathways.

Studies have implicated the posterior cingulate cortex, frontal cortex, and cerebellum brain regions in grief processing. These regions are involved in retrieving memories and dwelling on the past — but, in a cruel twist of neuroanatomy, they’re also involved in regulating sleep and appetite. “This might provide some explanation for the different and unique responses to grief and loss,” Jumoke Omojola, a clinical social worker in Omaha, Nebraska, told Fatherly. “Physiological changes might include headaches, stomach aches, dizziness, tightness in the chest too much sleep, too little sleep, overeating, or lack of appetite.”

In the short term, neurology assures us that loss will trigger physical distress. In the long-term, grief puts the entire body at risk. A handful of studies have found links between unresolved grief and hypertension, cardiac events, immune disorders, and even cancer. It is unclear why grief would trigger such dire physical conditions, but one theory is that a perpetually activated sympathetic nervous system (fight or flight response) can cause long-term genetic changes. These changes — less pre-programmed cell death, dampened immune responses — may be ideal when a bear is chasing you through the forest and you need all the healthy cells you can get. But this sort of cellular dysregulation is also how cancerous cells metastasize, unchecked.

While the physical symptoms are relatively consistent, the psychological impacts are all but unpredictable. In the twelve months following the loss of a parent, the American Psychological Association’s Diagnostic and Statistical Manual of Mental Disorders considers it healthy for adults who have lost their parents to experience a range of contradictory emotions, including sadness, anger, rage, anxiety, numbness, emptiness, guilt, remorse, and regret. It is normal to withdraw from friends and activities; it is normal to throw oneself into work.

As ever, context matters. Sudden, violent death puts survivors at higher risk of developing a grief disorder, and when an adult child has a fractured relationship with a parent, the death can be doubly painful — even if the bereaved shuts down and pretends not to feel the loss. “Coping is less stressful when adult children have time to anticipate parental death,” Omojola says. “Not been able to say goodbye contributes to feeling depressed and angry.” This may explain why studies have shown that young adults are more affected by parental loss than middle-aged adults. Presumably, their parents died unexpectedly, or at least earlier than average.

Gender, of both the parent and child, can especially influence the contours of the grief response.

Studies suggest that daughters have more intense grief responses than sons, but men who lose their parents may be slower to move on. “Males tend to show emotions less and compartmentalize more,” Carla Marie Manly, a clinical psychologist and author, told Fatherly.

“These factors do affect the ability to accept and process grief.” Studies have also shown that loss of a father is more associated with the loss of personal mastery — purpose, vision, belief, commitment, and knowing oneself. Losing a mother, on the other hand, elicits a more raw response. “Many people report feeling a greater sense of loss when a mother dies,” Manly says.“This can be attributed to the often close, nurturing nature of the mother-child relationship.”

At the same time, the differences between losing a father and a mother represent relatively weak trends. “Complicated bereavement can exist no matter which parent is lost,” Benders-Hadi says. “More often, it is dependent on the relationship and bond that existed with the parent.”

Grief becomes pathological, according to the DSM, when the bereaved are so overcome that they are unable to carry on with their lives. Preliminary studies suggest this occurs in about 1 percent of the healthy population, and about 10 percent of the population that had previously been diagnosed with a stress disorder. “A diagnosis of Adjustment Disorder is made within three months of the death if there is a ‘persistence of grief reactions’ exceeding what’s normal for the culture and the religion,” Omojola says. “In this situation, the grieving adult has severe challenges meeting social, occupational, and other expected, important life functions.” Even adults who are able to go to work and put on a brave face may be suffering a clinical condition if they remain preoccupied with the death, deny that their parent has died, or actively avoid reminders of their parents, indefinitely. This condition, known as Persistent Complex Bereavement Disorder, is a trickier diagnosis to pin down (the DSM labeled it a “condition for further study”).

Elisabeth Goldberg works with grieving adults as a relationship therapist in New York City, and she has seen the toll that long-term grieving can take on a marriage. Specifically, Goldberg suggests a (somewhat Freudian) link between losing a parent and cheating on a spouse. “I see many affairs as manifestations of unresolved grief about losing a parent,” Goldberg says. “The adult child stays in a state of disbelief, and rejects reality in many ways in order to feed the delusion that the parent is still alive. The grieving child needs a new attachment figure, that’s the psyche trying to reconcile the denial and grief. So rather than say, ‘my mother died,’ the grieving child can say, ‘while mommy’s away, I will play with someone other than my  spouse.’”

In more concrete — and dire — terms, unresolved grief can spiral into anxiety and depression. This is especially true when the parent dies by suicide, according to Lyn Morris, a licensed therapist and VP at Didi Hirsch Mental Health Services. “Adults who lose a parent to suicide often struggle with complex emotions such as guilt, anger, and feelings of abandonment and vulnerability,” she told Fatherly. Indeed a 2010 study out of Johns Hopkins University confirmed that losing a parent to suicide makes children more likely to die by suicide themselves.

How to cope in a healthy way remains an active area of scientific inquiry. Ross Grossman, a licensed therapist who specializes in adult grief, has identified several “main distorted thoughts” that infect our minds when we face adversity. Two of the most prominent are “I should be perfect” and “they should have treated me better” — and they tug in opposite directions. “These distorted thoughts can easily arise in the wake of a loved one’s death,” Grossman says.

When a son or daughter reflects on how he or she should have treated a deceased parent, “I should be perfect” thoughts tend to rise to the surface. Grossman’s patients often feel that they should have done more and, “because they didn’t do any or all these things, they are low-down, dirty, awful, terrible human beings,” he says. “These kinds of thoughts, if left undisputed, usually result in a feeling of low self-worth, low self-esteem, shame, self-judgment, self-condemnation.”

On the opposite extreme, patients sometimes blame their deceased parents for not treating them properly, and never making amends. This is similarly unhealthy. “The usual result of this is deep resentment, anger, rage,” Grossman says. “They may have genuine, legitimate reasons to feel mistreated or abused. In these situations, it’s not always the death of the parent but the death of the possibility of reconciliation, of rapprochement and apology from the offending parent.”

“The possibility has died along with the person.”

In extreme cases, therapy may be the only way to get a grieving son or daughter back on his or her feet. But time, and an understanding spouse, can go a long way toward helping adults get through this unpleasant, yet ubiquitous, chapter in their lives. “Husbands can best support their wives by listening,” Manly says. “Men often feel helpless in the face of their wives’ emotions, and they want to fix the situation. A husband can do far more good by sitting with his wife, listening to her, holding her hand, taking her for walks, and — if she desires — visiting the burial site.”