President Barack Obama returned to the world stage in a big way on Tuesday and delivered verbal body blows to President Donald Trump, sharply criticizing his successor without mentioning his name.

See Also: A Tale Of Two Presidents: While Trump Was Committing Treason, Obama Was Living His Blackest Life In The Motherland

At what was dubbed the “Treason Summit,” Trump sided with Putin over America’s intelligence agencies. The intelligence community concluded that Russia interfered with the 2016 U.S. presidential election. One day later Trump denied backing Putin, even though the whole world heard his betrayal of America.

In one of several references to Trump, Obama warned the world about the rise of “strongman politics” and how it was destroying the norms and institutions of democracy. 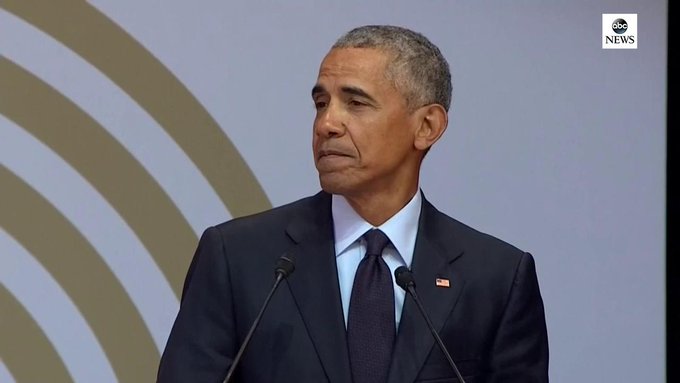 Former Pres. Obama: “Look around: strongman politics are ascendant…whereby elections and some pretense of democracy are maintained, the form of it, but those in power seek to undermine every institution or norm that gives democracy meaning.” https://abcn.ws/2uvBGfv

Here are 29 other subliminal shots Obama took at Trump:

3. “Unfortunately, too much of politics today seems to reject the very concept of objective truth.”

5. “We see the utter loss of shame among political leaders when they’re caught in a lie.”

6. Politicians are “caught in a lie and they just double-down and they lie some more.”

7. “It is a plain fact that racial discrimination still exists in both the United States and South Africa.”

8. “There has been an explosion in economic inequality.”

9. “A few dozen individuals control the same amount of wealth as the poorest half of humanity.”

10. “Just ask the French football team that just won the World Cup,” if you doubt the value of diversity.

15. Obama urged the world to keep respecting human rights and other values.

16. “We see much of the world threatening to return to a more dangerous, more brutal, way of doing business.”

17. Some leaders are pushing a “politics of fear, resentment, retrenchment.”

18. The politics of fear is moving “at a pace unimaginable just a few years ago.”

19. “I would have thought we had figured out [the value of diversity] by now.”

21. Obama warned about the consequences of denying facts—like climate change.

26. “I believe in a vision shared by Gandhi and King and Abraham Lincoln.”

27. “I believe in a vision of multi-racial democracy.”

28. “I believe in the premise that all people are created equal.”