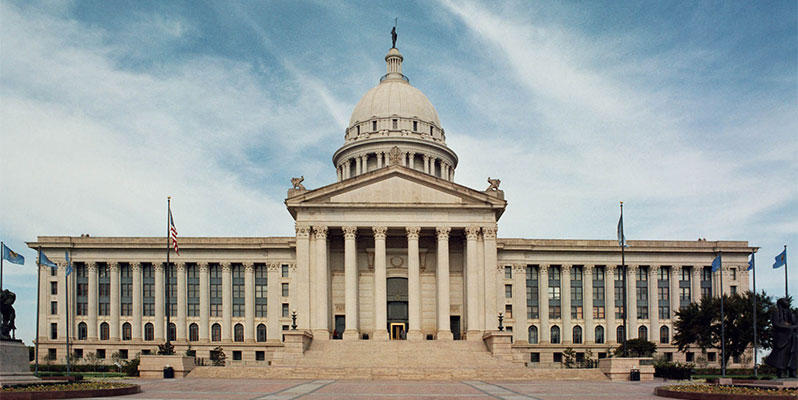 In The News The Number of Runoffs Statewide May Be Unprecedented: One of the most remarkable periods in Oklahoma political history has entered another phase, one that is largely inconsequential in most election years, but that this time is almost certain to have long-lasting effects. From governor to county assessor, the number of runoffs statewide is easily the most in at least a generation and may be unprecedented. The House of Representatives alone has 29 runoffs, of which 10 involve incumbents, all Republicans [ Tulsa World].

Rule Change Conceals Statewide Candidates’ Personal Finances:  When Oklahomans return to the polls to select the states next governor and a host of statewide and legislative officers, they will be making their choices without potentially decisive information. That includes how much candidates earn in their private-sector careers and what their sources of income and investments are. If they have any financial dealings that could pose conflicts of interest in office, the facts wont likely be made public. Voters will only know what candidates choose to divulge [ Oklahoma Watch]. Oklahoma Watch requests personal financial details from candidates [ Oklahoma Watch].

Waiver Proposal Is a Threat to Health Care for Thousands of Oklahoma Parents and Caretakers:  Thousands of Oklahoma families are able to see a doctor or fill a prescription because of the states Medicaid program, SoonerCare. But instead of working to strengthen this proven, cost-effective program, Oklahoma is asking the federal government for permission to cut off Oklahoma parents and caretakers who dont report working enough hours every week. SoonerCare was built to ensure that low-income families get essential health care, not to punish families for losing a job or missing some paperwork. The states new proposal is unworkable and should be withdrawn [ OKPolicy]. Statement: Soonercare waiver request is deeply flawed and should be withdrawn [ OKPolicy].

More Marijuana Initiatives Could Be on November’s Ballot: Oklahoma voters just passed a medical marijuana law. Another initiative &mdash; for recreational use might be on the ballot in November. A petition being circulated would make marijuana legal for all of the states citizens who are 21 and older and allow for commercial entities to set up a recreational marijuana industry in the state. Green the Vote, a group that has circulated multiple failed marijuana petitions in the past, needs to collect about 124,000 valid signatures by Aug. 8. That would put State Question 797 on the Nov. 6 ballot [ Tulsa World].

12 Apply to Grow Hemp:  The states new industrial hemp development program has attracted a dozen applicants in the four months since it was created. Redlands Community College in El Reno has attracted eight of those applicants as research partners. We have a very strong agriculture program with professional contacts throughout the state Redlands spokeswoman Dayna Rowe said. We also have an amazing aquaponics program which were working on with Langston University. So working on this industrial hemp pilot program is obviously a good [Journal Record].

Shakedown: Oklahoma Largest Private Prison Wants More Money. or Else: With the threat it would lock out more than 2,600 Oklahoma prison inmates, the owner of Oklahoma largest private prison successfully lobbied the state Legislature for a raise this year. The GEO Group sprawling Lawton Correctional Facility holds about 10 percent of Oklahoma’s prison population. With Oklahoma prisons now operating at 114 percent capacity, the private corrections company has the bargaining power to ask the state for more money [ The Frontier].

Kris Steele: Justice Reform Requires Greater Buy-In:  By passing State Questions 780 and 781 in 2016, voters sent a clear message that Oklahomans want treatment for drug addiction rather than punishment. The two measures reclassified drug possession and certain lower-level property crimes as misdemeanors, and reinvested savings into prison alternatives and treatment. This approach is based on decades of criminological research, plus good common sense [ Kris Steele / NewsOK].

Holt promises ‘bold plan’ to improve schools: Oklahoma City Mayor David Holt, who is one month into his first term, wants education to be a central part of his political platform and he expects to have an action plan in place in the next year or two. In Oklahoma, cities do not have control or authority over public school districts. However, Holt said he wants to be involved in local education, especially the Oklahoma City Public Schools district, where his two children attend. [ NewsOK]

Oklahomans Expected to Keep Quitline Busy After Cigarette Tax Increase:  A smoking habit got quite a bit more expensive for Oklahomans on Monday, and public health advocates are trying to make the most of a moment when quitting cigarettes might suddenly look more attractive. As many as 18,700 adult smokers in Oklahoma are expected to try to quit as they begin to absorb the sticker shock of paying an extra $1 in taxes on each pack of cigarettes or little cigars [ NewsOK].

Federal Pay Prevents Oklahoma City VA from Filling Some Doctor Positions:  There are 21 job openings at the Oklahoma City VA Medical Center and many of them may never be filled. A federal report released last month found the hospital had a high number of vacancies. Wade Vlosich, its director, says that’s largely due to the way he calculates shortages but concedes some positions are nearly impossible to fill [NewsOK].

Advocates: Don’t Let Rape Kit Backlog Deter Being Tested:  Advocates for women in Oklahoma say a recent focus on untested rape kits in the state shouldn’t deter anyone from getting examined. The Oklahoma Attorney General’s Office tallied more than 7,000 rape kits that law enforcement agencies had not sent for laboratory exams. The Oklahoman reports some of the kits date as far back as 1980 [AP News].

No One Tests Positive for Hiv After Syringes Reused at Cherokee Hospital:  Cherokee Nation officials in Oklahoma say more than 180 patients affected by a tribal hospital nurse improperly reusing syringes have been notified they can receive free blood tests and that no one has tested positive for HIV or hepatitis. So far, 127 of the patients have been tested. Tribal officials said Thursday it’s unclear whether the rest will get tested [ Public Radio Tulsa].

Scott Pruitt, fallen E.P.A. Chief, may rise again in Oklahoma:  Scott Pruitt brief, tumultuous tenure as the head of the Environmental Protection Agency has left him disgraced in the eyes of many in Washington and across the country. But it may not have done him much harm in his home state. Though a comeback for Mr. Pruitt is far from assured, some liberals and conservatives in Oklahoma agree he could engineer one in this oil- and gas-dependent state where he used to be attorney general [New York Times].

Quote of the Day “Today, some district attorneys and their allies are trying to discredit the progress made by saying there are no savings to reinvest in alternatives and treatment. The money is there, but it is unfortunately being spent on continuing to incarcerate people who battle addiction. As a former speaker of the Oklahoma House, I can say with certainty that a law isn’t much of a law if the people tasked with implementing it don’t believe in it. As long as prosecutors keep sending people to prison for drug possession, reinvestments in treatment that voters demanded won’t happen.”
-Oklahomans for Criminal Justice Reform chairman Kris Steele, writing about how district attorneys in Oklahoma have continued to pursue the harshest possible sentences they can for drug possession, against the will of the voters and at huge taxpayer expense [ NewsOK]

Policy Note One County Thrives. The Next One Over Struggles. Economists Take Note: In what is surely a related pattern, Joseph Parilla and Mark Muro of the Brookings Institution found that not only are there big differences in the productivity of different regions how much economic output is generated per worker but that the high-productivity regions are also pulling away from the low-productivity ones. This body of work focused on how differences in regional economies can explain broader challenges is attracting more notice from economists and policymakers who have tended to look at things from a national perspective. They’re realizing it may not be enough to worry about overall levels of G.D.P. or employment or wages when those headline numbers can mask big problems [ New York Times].