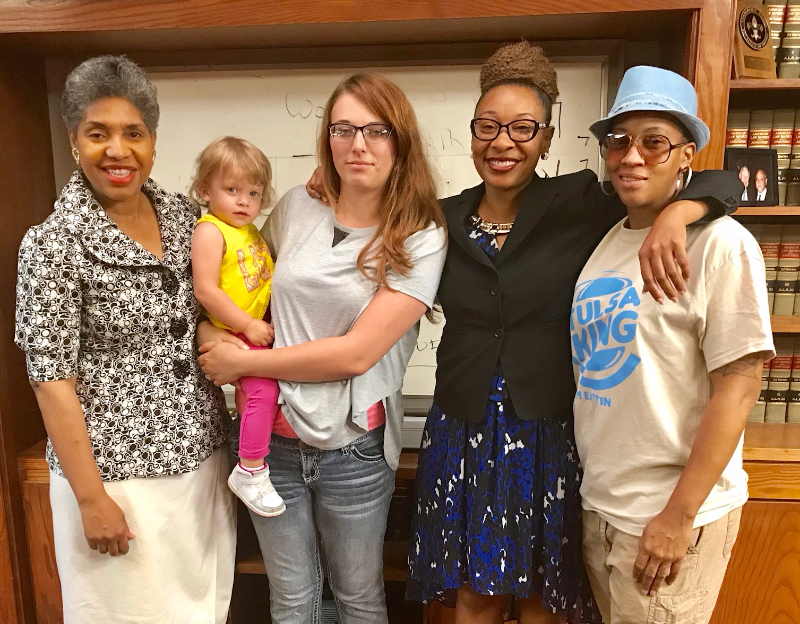 A bill banning the shackling of incarcerated women during labor and delivery is now law in Oklahoma. House Bill 3393 authored by Rep. Regina Goodwin, D-Tulsa and Sen. AJ Griffin, R-Guthrie was signed into law by Gov. Mary Fallin on Thurs. May 10. Rep. Ben Loring and Rep. Cory Williams were among many who helped on the bi-partisan bill.

“Women are of worth and deserve decent and humane treatment. This is a medical issue, a moral issue and a mother’s issue. It doesn’t cost anything to be decent.”

D’Marria Monday, National Council of Incarcerated and Formerly Incarcerated Women and Girls shined a light on the issue and introduced Warkeisha Metoyer to Goodwin. Metoyer, a former inmate, spoke of being shackled by her right wrist and right ankle to a bedpost during the delivery of her son in 1995. Mercedes Curley, a former Dept. of Corrections  (DOC) inmate, told of being shackled in the exact same way during the delivery of her daughter in 2016 at the University of Oklahoma Medical Center in Oklahoma City.

Marilyn Davidson, Legislative Liason, Director of Corrections, also provided input on the bill. Safety concerns are addressed in the bill, should compelling circumstances arise, the doctor can request the least restrictive restraints be used. Approximately 80 percent of female inmates are in custody for non- violent offenses.

The law allows for an additional person to be present during delivery, either a pre-approved family member or friend, a doula or a member of the clergy. Many supported passage, Atty. Tamya Cox, Priya Desai, Oklahoma Coalition for Reproductive Justice, Bailey Perkins, Rhonda Bear, Pam Smith, Lynn Powell, If, Why, How Reproductive Rights Advocates of Tulsa University, Emily Turner, Oklahoma March of Dimes, Angela Joy, Danielle Williams and many more. Curley said, “I am so pleased with this law, l didn’t want my pain to be in vain.”

Rep. Goodwin states, “This is progress in terms of criminal justice reform, there is much more work to be done.”