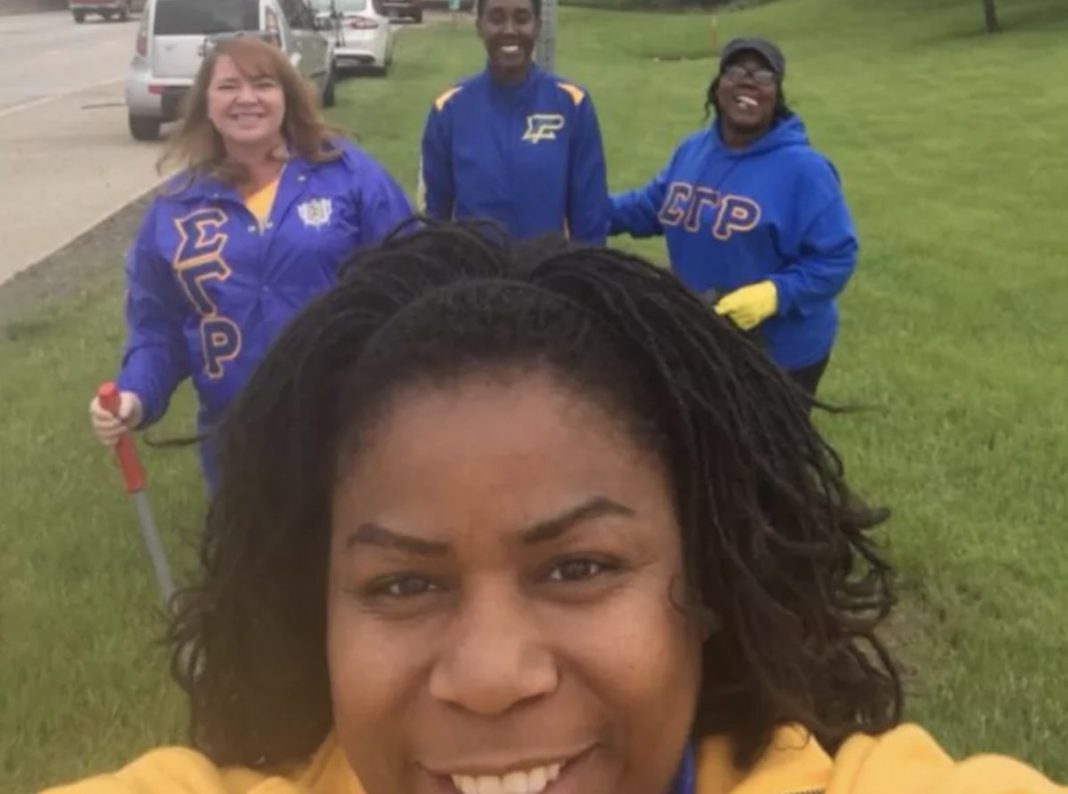 The absurdity of the situation was so overwhelming that, for a moment, Shawna Harrell had to walk away from the state trooper in front of her.

Here she was, garbage bag in hand on a highway shoulder — elbows deep in bottles and needles and diapers discarded by other people — trying to explain to a man with a badge why she was not a suspicious character.

The historically black Sigma Gamma Rho sorority’s Harrisburg, Pa., chapter had adopted a section of Interstate 83 near the Susquehanna River. And on Saturday, Harrell and other sisters grabbed bags, gloves and blue and gold T-shirts and went out to do some service for their community. After a quick selfie in front of the Adopt-a-Highway sign stenciled with the sorority’s name, they had filled several bags.

Volunteering while black: Cop allegedly accused sorority girls of ‘fighting’ while they were doing…

Black people are not allowed to BBQ without getting the cops called on them, and we can now add “serving the community,” to possible offenses that will make cops suspicious of people of color. As a…

Then they saw the state trooper, lights flashing, pull up behind one of their parked cars.

“What’s going on?” the trooper asked, according to a recounting of the incident posted by Harrell and shared on social media. “Are y’all fighting?”

The officer said he had received reports of black women fighting on the side of the highway, Harrell said.

“No, sir,” Harrell told him. “We are cleaning the highway.”

To emphasize their point, the women held up their garbage bags and pointed to the highway sign that had been the centerpiece of their selfie moments ago — not to mention the sorority insignia on their shirts.

It was not enough. The trooper said he had never seen people cleaning this particular section of highway and wanted to see ID.

And just like that, Harrell said, they were the latest people to have their innocuous activity viewed through criminal-tinted glasses — all because they happen to be black.

Or, as fellow Sigma Gamma Rho sorority member Britni Danielle wrote on Twitter: “Add ‘performing community service while Black’ to the list of things that make you suspicious.”

“Performing community service” would be another eye-rollingly bizarre entry into the list of things that have put black people under the suspicious gaze of neighbors, colleagues and police — some cases so absurd they would be funny if they were not soul-suckingly demoralizing and potentially deadly.

[Share your story: Have you been racially profiled on a college campus? What happened?]

The nation is embroiled in a debate about the disparate treatment of black people in public spaces after police were called on two men waiting for another at a Philadelphia Starbucks and a woman who got into a dispute with workers at an Alabama Waffle House over plastic-ware.

The trend has been repeated across the nation. A black kindergartner was handcuffed by police for throwing a temper tantrum. Police have been sicced on black people buying clothes at fancy stores, and the less-fancy outlets where those stores ship out-of-season clothes. One man believes someone thought he was a “dangerous Negro” while watching waves and quietly reflecting on a book about being a better Christian. Last week, a Yale University student had the cops called on her because she was taking a nap. 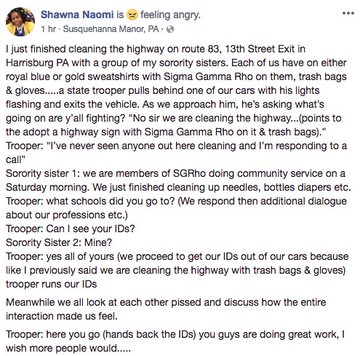 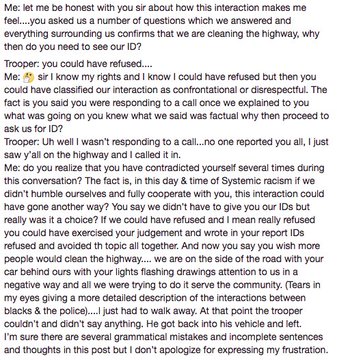 Add “performing community service while Black” to the list of things that make you suspicious.

This happened to my #SGRho sorors in Harrisburg, PA this morning. Though they weren’t harmed (Thank God!) the fact that the officer asked for their IDs is telling. #BlackLivesMatter

In her post, Harrell said she had filed a formal complaint.

Sigma Gamma Rho Sorority had gotten word of the incident and demanded an apology.

We ask that the Pennsylvania State Highway Patrol immediately issue a public apology to the members of the sorority questioned, have a renewed commitment to becoming a part of the community they police through diversity and town hall meetings,” the statement said. 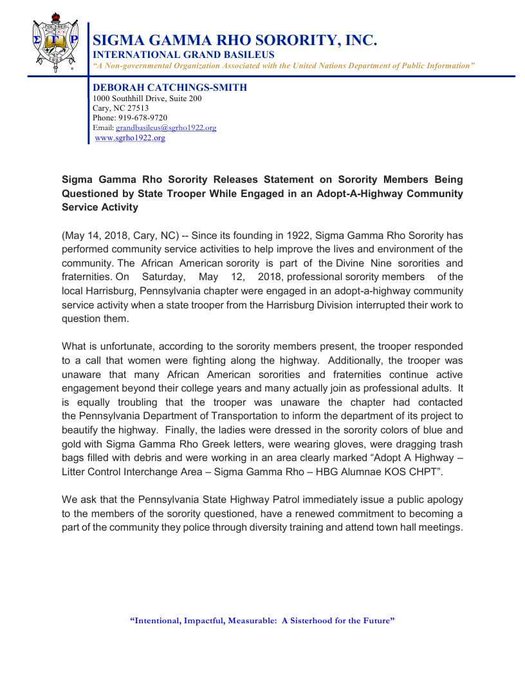 In a statement emailed to The Washington Post on Tuesday, the Pennsylvania State Police did not respond to the issues of race brought up by Harrell and her sorority. The statement said the trooper stopped “in response to a call regarding pedestrians along the highway” and that it is “common practice for troopers to assist pedestrians along busy highways such as I-83, to ensure their safety as well as the safety of other drivers in the area.”

Ryan Tarkowski, a spokesman for the Pennsylvania State Police said, the incident “does not appear to have been initiated by a call from [a] member of the public.” He said the trooper asked the women for identification so that he could document who he spoke with.

Drivers routinely call police when they see people on the side of the highway, Tarkowski said.

It was also unclear if the police agency intended to issue an apology.

The agency did however, comment on the volunteers’ Saturday morning service.

“The State Police did not intend to inconvenience the volunteers, who had every right to be there,” the statement said.

“And we commend them for their efforts to help beautify Pennsylvania’s highways.”