www.nydailynews.com
By ARIEL SCOTTI
First Lady Melania Trump’s “Be Best” campaign to help kids launched on Monday — but the rollout was marred by questions about the slogan, concerns that she again ripped off Michelle Obama and a broken website link.

The First Lady’s signature initiative — finally launched 472 days after her husband took office — seems to be a catch-all for everything she’s ever deemed not best.

Unfortunately, the slogan doesn’t make much sense. Does it mean ‘Be the Best?’ Be Your Best?’ Something else?

And, for more than 10 minutes after the site was announced, it directed users to a 404 error screen.

The first pillar of the three-pronged mess is “wellbeing,” meant to encourage “healthy living” that is then supposed to foster “encouragement, kindness, and respect” — three separate props in an overwhelmed child’s repertoire of traits to help him or her “deal with the evils of the opioid crisis and avoid negative social media interaction.”

But does healthy living not also involve healthful eating and exercise? If so, former First Lady Michelle Obama already covered that during her tenure.

Obama used a phrase in 2016 that sounds an awful lot like “Be Best,” as well, albeit with far more grammatical prowess — not unlike the speech that ignited plagiarism-gate.

At a White House Summit on the United State of Women, Obama’s advice to men was to “Be Better” — a recommendation that the current First Lady could have heeded herself during a 2011 appearance on the “Joy Behar Show” when she demanded to see President Obama’s birth certificate.

When Melania had a chance to “Be Best” she chose ”Be a Birther”https://www.youtube.com/watch?v=sSTx1ZODEcQ&sns=tw … via @youtube

“Never forget: “prompted political consultant Philippe Reines on Twitter after the Rose Garden speech, “When Melania had a chance to ‘Be Best’ she chose ‘Be a Birther.’

Some pointed out that Obama wasn’t the only one copied in the “Be Best” whirlwind. The initiative’s pamphlet is alarmingly close in look, tone and language to a 2014 release from the Federal Trade Commission on “Chatting with Kids About Being Online.”

lmao… the White House/Melania Trump Be Best pamphlet about your kids being online is almost the exact same thing that the FTC published in Jan. 2014:

The “awkward, infantile, poor English” slogan, as another social media user described it, aims to tackle opioid abuse, too — the disease that kills more than 115 people in the United States each day, most of whom aren’t children.

The First Lady’s most criticized initiative, social media and the subsequent birth of cyberbullying rounded out her lofty goals for the rest of her husband’s presidency. Trump’s reputation as the “cyberbully-in-chief” as some have slammed the President for his tendency to mock and belittle members of the media, foreign leaders, political opponents, minorities, LGBTQ people, Gold Star parents and the disabled, was not lost on Twitter.

Melania Trump is here to warn us that cyberbullying is so terrible that it could even make her husband president.

WTF does “Be Best” mean?

I know she tried, but didn’t anyone Vet this ridiculous slogan?

P.s, #Trump is literally the biggest Cybor Bully in the WORLD.
There is ZERO credibility in #Melania Trump’s attempt at this program.@FLOTUS @Potus#bebest 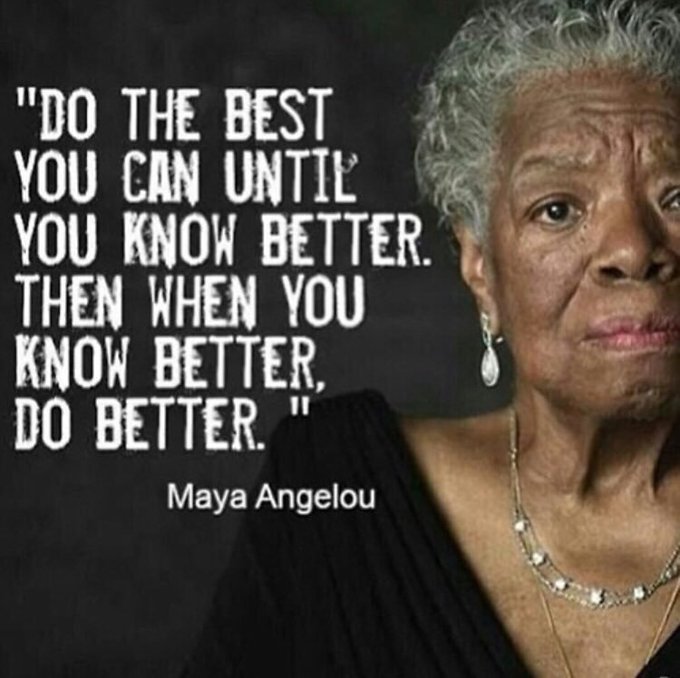 Are you KIDDING me right now?!
#Speechless

Be Best!? Your husband is The Worst! Try again Melania! It starts at home, clean yours out first before you feel you can preach to our children! @realDonaldTrump is the biggest bully ever! You are a hypocrite standing beside a cheater, racist, homophobic bully! He’s the BULLY!

I’m sorry…but it’s very, very hard to listen to @FLOTUS talk about how to raise happy, healthy, productive children–who know “right from wrong”– when the in-house role model for her own son is a vile, offensive, intolerant, sexist, misogynist, racist bully. #Trump #Melania

Why does the press allow Melania Trump to keep punking us? Donald is the biggest cyber bully on @Twitter. Also, did she steal this from Michelle Obama’s “Be Better”?

“It is our responsibility as adults to educate and remind them that…they must choose their words wisely and speak with respect and compassion.” 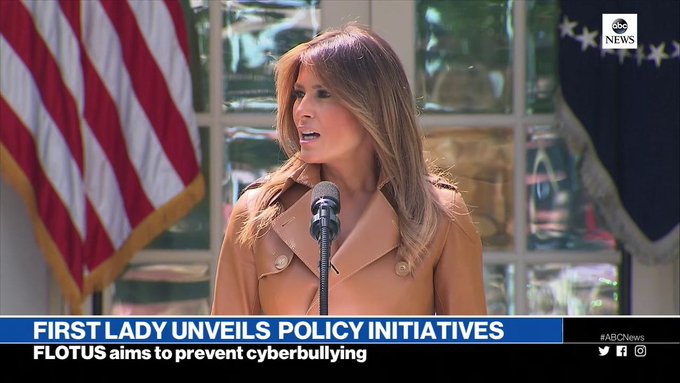 Please, don’t say Melania is rebuking Trump. She is helping him by gaslighting America. How could he be a bully if she’s anti-bullying. It’s a giant troll campaign. It’s gaslighting, it’s mocking us, laughing at how gullible people can be.

As Melania Trump takes the stage at the Rose Garden to unveil her platform, I am wondering what is going through the mind of the man who treats women like trash and bully any time he gets the chance to do so. 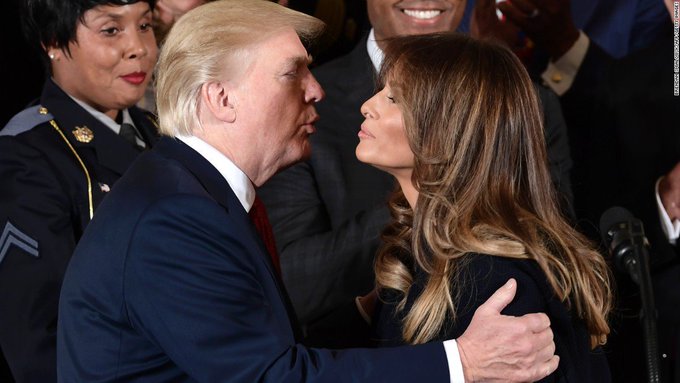 Watch Live: And Now, Melania Trump Will Gloss Over the Fact That She’s Married to a Racist Philandering Bully http://lgf.bz/2roCMbA

The WashPost reports on the fairy tale love story that is the Trump marriage https://www.washingtonpost.com/lifestyle/inside-melania-trumps-complicated-white-house-life-separate-schedules-different-priorities/2018/05/06/60f6f07e-4703-11e8-9072-f6d4bc32f223_story.html?utm_term=.b5563a9effa5 …

She is a birther. She allowed her husband to trot out Clinton’s women during the debate. She has not pushed back against him by launching her bully campaign, which should target him. I have zero respect for Melania. She knew what he was. She’s complicit for enjoying the spoils.