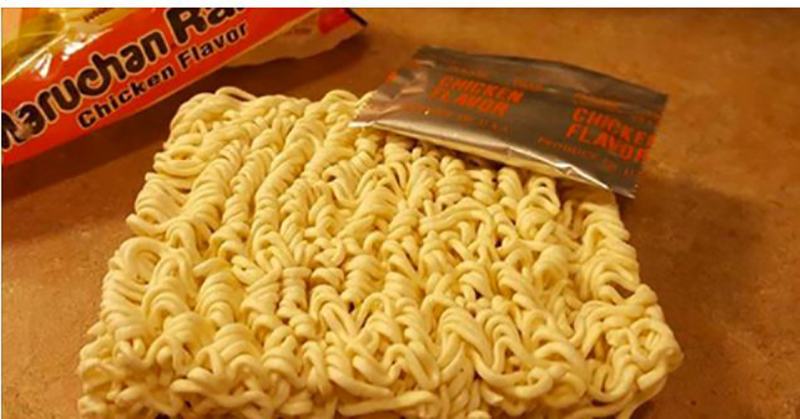 Instant noodles are a popular go-to lunch or dinner for those who are strapped for time (or cash), like college students. While you probably don’t consider them a health food, you may think they’re not that bad, or, at least, not as bad as eating a burger and fries or a fast-food burrito.

In a first-of-its-kind experiment, however, Dr. Braden Kuo of Massachusetts General Hospital may make you reconsider your love of instant noodles (assuming you have one).

He used a pill-sized camera to see what happens inside your stomach and digestive tract after you eat ramen noodles, one common type of instant noodles. The results were astonishing…

Ramen Noodles Don’t Break Down After Hours of Digestion

In the video above, you can see ramen noodles inside a stomach. Even after two hours, they are remarkably intact, much more so than the homemade ramen noodles, which were used as a comparison. This is concerning for a number of reasons.

For starters, it could be putting a strain on your digestive system, which is forced to work for hours to break down this highly processed food (ironically, most processed food is so devoid of fiber that it gets broken down very quickly, interfering with your blood sugar levels and insulin release).

Get your Free copy of The Wicked Good Ketogenic Diet Cookbook

This free cookbook is jampacked with 148 delicious ketogenic recipes that will help you burn fat like crazy!

When food remains in your digestive tract for such a long time, it will also impact nutrient absorption, but, in the case of processed ramen noodles, there isn’t much nutrition to be had. Instead, there is a long list of additives, including the toxic preservative tertiary butyl hydroquinone (TBHQ).

This additive will likely remain in your stomach along with the seemingly invincible noodles, and no one knows what this extended exposure time may do to your health. Common sense suggests it’s not going to be good…

TBHQ, a byproduct of the petroleum industry, is often listed as an “antioxidant,” but it’s important to realize it is a synthetic chemical with antioxidant properties – not a natural antioxidant. The chemical prevents oxidation of fats and oils, thereby extending the shelf life of processed foods.

But you can also find it in varnishes, lacquers, and pesticide products, as well as cosmetics and perfumes to reduce the evaporation rate and improve stability.

At its 19th and 21st meetings, the Joint FAO/WHO Expert Committee on Food Additives determined that TBHQ was safe for human consumption at levels of 0-0.5 mg/kg of body weight.1

However, the Codex commission set the maximum allowable limits up to between 100 to as much as 400 mg/kg, depending on the food it’s added to.2 (Chewing gum is permitted to contain the highest levels of TBHQ.) In the US, the Food and Drug Administration requires that TBHQ must not exceed 0.02 percent of its oil and fat content.3

So there’s quite a discrepancy in supposedly “safe” limits, but it’s probably best to have little or no exposure to this toxicant, as exposure to five grams can be lethal and, according to A Consumer’s Dictionary of Food Additives, exposure to just one gram of TBHQ can cause:4

While TBHQ is not suspected to be a persistent toxicant, meaning your body is probably able to eliminate it so that it does not bioaccumulate, if you eat instant noodles your body might be getting prolonged exposures. This is concerning, to say the least. According to the Environmental Working Group (EWG), based on animal studies health hazards associated with TBHQ include:5

If you’re still considering ramen noodles for lunch, you should know a new study published in the Journal of Nutrition found that women who consumed more instant noodles had a significantly greater risk of metabolic syndrome than those who ate less, regardless of their overall diet or exercise habits.6

Having three or more of the symptoms increases your risk of developing diabetes and cardiovascular disease. Past research also analyzed overall nutrient intake between instant-noodle consumers and non-consumers, and found, as you might suspect, that eating instant noodles contributes little value to a healthy diet.

The instant noodle consumers had a significantly lower intake of important nutrients like protein, calcium, phosphorus, iron, potassium, vitamin A, niacin, and vitamin C compared with non-consumers.7 Those who ate instant noodles also had an excessive intake of energy, unhealthy fats and sodium (just one package may contain 2,700 milligrams of sodium).8

What Else Is in a Package of Instant Noodles?

Aside from a lot of sodium and the preservative TBHQ, what else is found in a typical serving of instant noodles?

…In June 2012, the Korea Food and Drug Administration (KFDA) found Benzopyrene (a cancer-causing substance) in six brands of noodles made by Nong Shim Company Ltd. Although the KFDA said the amounts were minuscule and not harmful, Nong Shim did identify particular batches of noodles with a problem, prompting a recall by October 2012.”

The monosodium glutamate (MSG) in instant noodles is reason enough to avoid them. MSG is an excitotoxin, which means it overexcites your nerve cells to the point of damage or death, causing brain dysfunction and damage to varying degrees — and potentially even triggering or worsening learning disabilities, Alzheimer’s disease, Parkinson’s disease, Lou Gehrig’s disease, and more.

Part of the problem is that free glutamic acid (MSG is approximately 78 percent free glutamic acid) is the same neurotransmitter that your brain, nervous system, eyes, pancreas, and other organs use to initiate certain processes in your body. Not to mention, MSG is also used to fatten up mice for scientific study. Yes, MSG is the perfect obesity drug. If you want to achieve your ideal body weight and health, avoid MSG at all costs.

Occasionally eating a package of instant noodles clearly won’t kill you, but when you make a habit of substituting convenience foods for real food, it’s only a matter of time before health problems will likely develop.

Instant noodles are a prime example of the types of processed foods you want to avoid as much as possible, as they are virtually guaranteed to make you sick and fat if you indulge too much (and “too much” may be as little as a couple of times a week).

Eating processed foods also promotes insulin resistance and chronic inflammation, which are hallmarks of most chronic and/or serious diseases. On the other hand, people have thrived on vegetables, meats, eggs, fruits, and other whole foods for centuries, while processed foods were only recently invented.

Ditching processed foods requires that you plan your meals in advance, but if you take it step-by-step as described in my nutrition plan, it’s quite possible, and manageable, to painlessly remove processed foods from your diet.

You can try scouting out your local farmer’s markets for in-season produce that is priced to sell, and planning your meals accordingly, but you can also use this same premise with supermarket sales.

You can generally plan a week of meals at a time, making sure you have all ingredients necessary on hand, and then do any prep work you can ahead of time so that dinner is easy to prepare if you’re short on time (and you can use leftovers for lunches the next day, so you don’t have to resort to instant noodles).

And if ramen noodles are a staple in your house and you can’t see yourself giving them up try something like these healthy options: