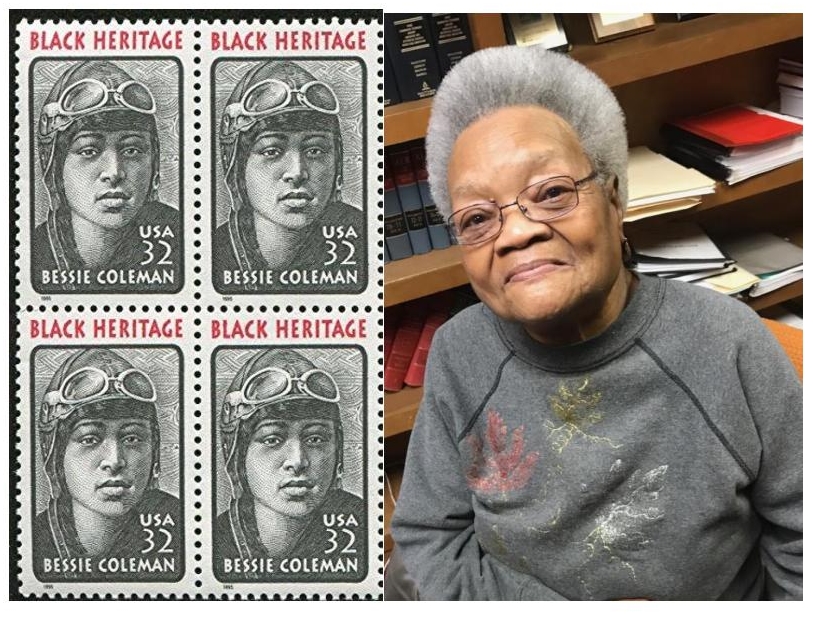 When Alberta Pankey called The Oklahoma Eagle to ask for a reprint of a story about her relative who was the “first female African American pilot,” the assumption was “she must be confused, because Bessie Coleman was the first black female pilot to earn a pilot’s license,” and this was two years before Amelia Earhart.

Coleman was born January 26, 1892, in Atlanta, Texas to Susan and George Coleman. She was one of 13 children. Her father was of Native American and African American descent. Therefore, Coleman had three strikes against her; she was she was black, female, and Indian. Three strikes, but she was not out.          According to biographers: “At 12 years old, Coleman began attending the Missionary Baptist Church in Texas. After graduating, she embarked on a journey to Oklahoma to attend the Oklahoma Colored Agricultural and Normal University (Langston University), where she completed only one term due to financial constraints.”

At the age of 23 she moved to Chicago, to live with a brother. She worked as a manicurist. She read and listened to stories about world War I pilots and this sparked her interest in aviation.

Every flying school that Coleman applied, refused her admittance because of her gender and race. Someone told her that there is one thing that women in France can do, that she can’t, and that is fly. Coleman decided to learn French. Her school was a four-mile walk from her house. She learned French, saved her money, and moved to France, earning her license from France’s well-known Caudron Brother’s School of Aviation in just seven months. Coleman specialized in stunt flying and parachuting, earning a living barnstorming and performing aerial tricks. She remains a pioneer of women in the field of aviation.

Coleman was honored with the issuance of a 32-cent commemorative stamp on April 27, 1995, in Chicago, Illinois. The stamp depicts Coleman in the leather helmet and goggles she wore as a 1920’s barnstormer. Bessie Coleman (1892-1926) was the world’s first licensed female African American pilot.

Will a Stand Your Ground Self-Defense Claim Save Black Oklahoma Man Who Killed White Intruder? Legal Expert Says It Depends: ‘I Just Leave It to God’

“On April 30, 1926, Coleman was in Jacksonville, Florida. She had recently purchased a Curtiss JN-4 (Jenny) in Dallas. Her mechanic and publicity agent, 24-year-old William D. Wills, flew the plane from Dallas in preparation for an airshow but had to make three forced landings along the way because the plane had been so poorly maintained. Upon learning this, Coleman’s friends and family did not consider the aircraft safe and implored her not to fly it. On take-off, Wills was flying the plane with Coleman in the other seat. She had not put on her seatbelt because she was planning a parachute jump for the next day and wanted to look over the cockpit sill to examine the terrain. About ten minutes into the flight the plane unexpectedly went into a dive and then a spin. Coleman was thrown from the plane at 2,000 ft (610 m) and died instantly when she hit the ground. William Wills was unable to regain control of the plane and it plummeted to the ground. Wills died upon impact and the plane exploded and burst into flames. Although the wreckage of the plane was badly burned, it was later discovered that a wrench used to service the engine had jammed the controls. Coleman was 34 years old.”

Pankey believes that the wrench was left in the controls on purpose.

About prejudice, Coleman had this to say: “The air is the only place free from prejudices. I knew we had no aviators, neither men nor women, and I knew the Race needed to be represented along this most important line, so I thought it my duty to risk my life to learn aviation.

Coleman also had this to say: “I decided blacks should not have to experience the difficulties I had faced, so I decided to open a flying school and teach other black women to fly.” She also said, “I refuse to take no for an answer.”