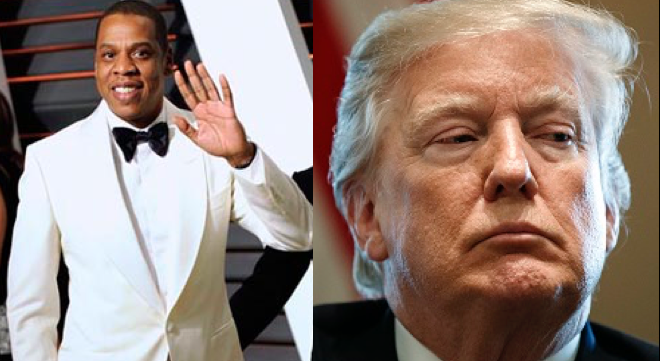 “Somebody please inform Jay Z that because of my policies, Black Unemployment has just been reported to be at the LOWEST RATE EVER RECORDED!,” Trump posted on Twitter.

“It is disappointing and it’s hurtful. It really is hurtful, more than so … everyone feels anger but after the anger, it’s real hurtful,” Jay Z said during an interview on CNN Saturday.

“Everyone feels anger, but after the anger it’s really hurtful because it’s looking down at a whole population of people and it’s so misinformed because these places have beautiful people and beautiful everything. This is the leader of the free world speaking like this,” Jay Z said.

During the interview, Jay Z was asked his thoughts about Trump’s claims that he is boosting Black unemployment. He said Trump is misguided.

“Because it’s not about money at the end of the day,” Jay Z said. “Money is not – money doesn’t equate to happiness. It doesn’t. That’s missing the whole point. You treat people like human beings, then – that’s the main point.”

“You treat people like human beings. That’s the main point,” he said. “It goes back to the whole thing — ‘treat me really bad and pay me well.’ It’s not going to lead to happiness, it’s going to lead to, again, the same thing. Everyone’s going to be sick.”

Critics of Trump, however, say economic growth began under President Barack Obamaand unemployment is still higher among African-Americans than for whites.

Trump’s opponents also say they can’t point to any concrete policies by the Trump administration that have created jobs for African-Americans as Trump always suggests.

It’s worth noting that Trump completely ignored Jay Z’s comments about the “shithole” controversy and focused only on black unemployment.

It’s legitimate to question what the Trump administration is doing to create jobs for Black folks and it also makes sense to ask why Trump spends so much time criticizing people on social media and trashing countries of color. (Trump denies making the “shithole” comment.)

“This has been going on,” Jay-Z said. “This is how people talk. This is how they talk behind closed doors.”

Last week, Trump expressed another fabrication aimed at African-Americans: He tweeted that black folks are now supporting him in substantial numbers.

Nothing could be further from the truth. In fact, The New York Times reports that support for Trump among African-Americans has actually declined from 20 percent when Trump took office, to 15 percent in December.

What do you think?