UPDATED 4:45 p.m. ET: Hill took to her Twitter to clarify why she’s leaving the show in an effort to clear up false rumors that may be spreading around the internet about the switch. She said she voluntarily left the show to get back to “reporting, writing, and commentary.” She also said that, in addition to working for The Undefeated, she’ll still be contributing to a “myriad of ESPN shows.” 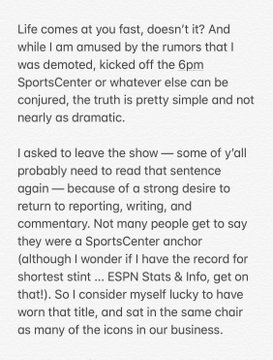 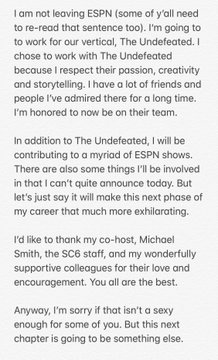 I have a few things to say …

ESPN’s Jemele Hill is changing lanes. After being caught in the middle of an extremely public controversy last fall, Hill has requested to be reassigned from the SC6 edition of SportsCenter, Sports Illustrated reports. But she looks to at least be staying in the family: Hill’s next home will be with The Undefeated, ESPN’s offshoot site that covers sports, race, and culture.

But back to that controversy. Take a walk down memory lane with me, as we recall the moment that Hill was thrust into the spotlight. Last September, Hill was having a Twitter conversation with some particularly dim-witted characters about the state of our country. During said conversation, Trump came up and Hill pulled out the yopper.

The height of white privilege is being able to

his white supremacy, because it’s of no threat to you. Well, it’s a threat to me.

Trump is the most ignorant, offensive president of my lifetime. His rise is a direct result of white supremacy. Period.

As you can see, the tweets are still up, meaning Hill was ready with the smoke and more than happy to let it settle. Unfortunately, someone of her status can’t exactly call the president a white supremacist and get away with it. ESPN reportedly looked into replacing Hill shortly after, and a White House spokeswoman called for Hill to be fired.

Hill was being watched closely from there on out and was suspended for a second violation of social media guidelines for telling her followers how to hypothetically go about protesting the NFL. Trump responded to the suspension, calling Hill out.

With Jemele Hill at the mike, it is no wonder ESPN ratings have “tanked,” in fact, tanked so badly it is the talk of the industry!

After serving her time, Hill told TMZ she deserved the suspension. “I violated the policy,” she said. “Going forward, we’ll be in a good, healthy place. It’ll be fine. The only thing I apologize for is I put ESPN in a bad spot. I’ll never take back what I said. ”

Hopefully, this reassignment will give Hill a fresh start with the company.