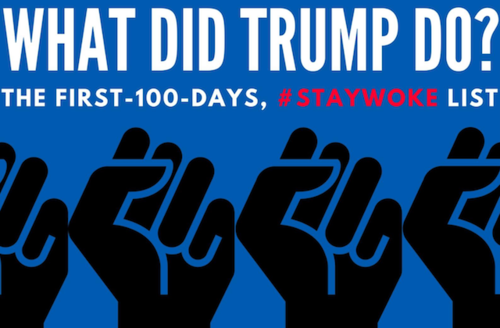 Trump After One Long Year

President Donald J. Trump is the Commander and Chief of our nation and occasional leader of the free world. Except when he is cozying up to Russian dictators. In his first year in office employment rates for African Americans are at an all-time high. Not sure that is the case in Tulsa, but, we should take him at his word on this one. If you are a savvy investor in the stock market, chances are you doing quite well. The much debated tax cuts this year will turn into tax increases and cuts in Social Security and Medicare in the future. Such is the way of living in the time of Trump.

Even the usually mild mannered Tulsa World has decided he’s not such a bad guy. All one can surmise is that they must be doing well under the new tax plan. Because some things are just impossible to ignore. This isn’t about being Democrat or Republican. It’s about respect and some modicum of class. The President lacks too much in those categories to let go.

After having Black protesters kicked out of his campaign events with “get him out of here” and “in my day, if somebody pulled that crap we’d beat the hell out of them.” But, he did nominate Ben Carson to head the Housing and Urban Development Department. Carson freely admitted he knows little about housing or its needs. Honesty is nice.

Trump was not fond of Colin Kaepernick’s political stance of kneeling during the national anthem. Perhaps if Trump was a practicing Catholic he might realize kneeling is not a disgraceful display of disrespect. Instead he called on NFL owners to kick that “S.O.B. out here”

He was for marching in the streets. Like the fine people marching with the Nazi’s as he called them at Charlottesville, Va. And Trump did recognize civil rights icon and United States Representative John Lewis but criticized him for having a terrible district that needed cleaning up.

I guess he can’t be blamed if his grandfather was arrested a at a Klan rally or his father was sued for not renting to African Americans or that Trump himself doesn’t want a Black accountant seeing his books and wanted a Jewish man to replace him.

Not confirmed yet whether the employment figures are the best ever, it’s certainly worth checking out and finding out how that happened.  But, don’t really care if you are working for Apple thanks to the tax cuts, the inane and disrespectful name calling and taunts have got to stop. One year of ridiculous behavior is enough.

A Bartlesville Grandmother was shot dead by Bartlesville Police when she fired a pellet gun at two of the officers, striking them. The tragic encounter happened while the officers were arresting her son for drug charges. It’s a reminder to not interfere with police let alone shoot at them with a pellet gun while they are performing their duties. It is also a reminder that police probably did not need to use lethal force. Even if they didn’t know what type of weapon she had, it was probably very clear it was not a firearm as well. A discharging pellet gun and automatic pistol sound completely different when discharged.

For now, little of that matters as 72 year old Geraldine Townsend is dead. We will never know what happened, was she confused, did she realized the men who entered her home were cops? The police can always cite a policy which gave them the go ahead to shoot the elderly African American. Would better training or other ways to disarm her might have worked better? The answer seems to be yes.

Oklahoma unfortunately is heading for a fiscal crisis and our out of control sentencing laws pushed by corporate jail interests are going to put Oklahoma at the top of the nation in incarceration by 2019. This is despite the optimism of some that Oklahoma was confronting its failed system of criminal justice. The department of corrections response is that they need two more prisons to house the growing rates.

All of this is cruelly insane given the fact Oklahoma can barely keep the doors open to the State’s schools. Oklahoma legislature has a strange marriage with private prison corporations who all but write the laws for lawmakers who can’t seem to say no to them or oil and gas interests. Oklahoma needs to reexamine the contracts with private prisons which forces Oklahoma to keep them full of Oklahoma inmates. Something needs to be done.

While other states have come to their senses that the current system not only doesn’t deter crime, it creates an unbearable burden on the state of Oklahoma to fund the system. We are number one in the nation in putting women into prison. Been that way for over 25 straight years. No one seems alarmed that we have a problem of locking up females in record numbers. What does that say about our State? Afraid the answer to that question would be less than positive.

For one thing Oklahoma lawmakers would have to remove corporate prison interests from their offices and stop taking their money and advice. Private prison interests tell Oklahoma lawmakers to create longer sentences for more crime. That they are more than capable of housing women and children. Yes, we routinely lead the nation in imprisoning children.

Oklahoma seems to have given up on alcohol and drug treatment centers and have forgotten the financial benefit of sending more nonviolent drug offenders to treatment and not prison. The state would save millions.

Talk to your legislator and push for more reforms to reduce the number of Oklahomans languishing in prison for what amounts to victimless and basically harmless crimes.