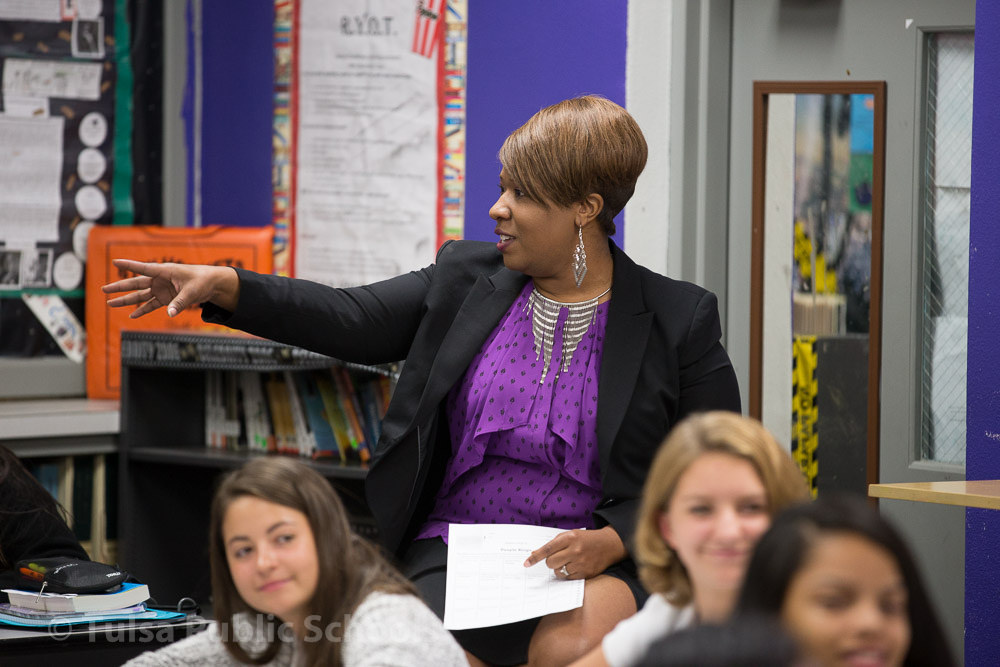 The State Department of Education surveyed thousands of former teachers about why they left the profession, and what it would take to get them back. The survey results, released Monday, suggest most quit because of low pay. Survey Details: When asked the open-ended question, “Why did you quit teaching in Oklahoma Public Schools?” 34 percent of respondents cited pay or a better opportunity. However, when given a multiple-choice question, 48 percent of respondents chose pay as the most important factor in their decision to quit teaching [StateImpact Oklahoma]. State Superintendent Joy Hofmeister announced her department’s proposed budget will include $289 million for a statewide $5,000 salary increase [NewsOK]. Another year goes by, and Oklahoma still leads the nation for cuts to education [OK Policy].

Oklahoma teachers continue wait for pay raise a decade after last increase: Cache Public Schools Assistant Superintendent Corey Holland worries about losing teachers due to low pay. But he’s especially concerned with the idea of potential teachers rejecting the career before they ever get started. “My oldest son loved being around students, went on church mission trips, was a summer sponsor for church camp and volunteer coach; he is the kind of person we need around kids,” Holland said [NewsOK].

Special session call amended: Gov. Mary Fallin adjusted the list of policies she will allow the Legislature to tackle during the second special session, and the new version looks similar to the Step Up Oklahoma plan. Her office issued a news release Friday evening, announcing she had updated the call to include several provisions, including new taxes on oil and gas, renewable energy generation, cigarettes and motor fuels [Journal Record]. Frequently asked questions about Oklahoma’s special session [OK Policy].

Installment loan bills get no interest this year: Industry representatives who have pushed for controversial installment loans are pumping the brakes this year. Consumer finance organizations have sponsored and lobbied for laws that create new small personal loan products similar to payday loans but with longer repayment periods. The most recent attempt, last year’s House Bill 1913, passed through the Legislature but was vetoed. Similar legislation appeared several times, including during the 2013 and 2016 legislative sessions [Journal Record]. New protections for payday loan borrowers are coming (if Congress will stay out of the way) [OK Policy].

Teacher writes letter to lawmakers with pay stubs from the last 9 years: It’s no secret teachers in our state are some of the lowest paid in the country. “I work two jobs after school, and I have a roommate who shares my house expenses,” said Lilli Lyon, a Spanish teacher at Moore West Junior High School. She said she hasn’t received a noticeable raise since she moved to Oklahoma from Indiana 10 years ago [KFOR].

Legislature should act on proposed occupational licensing reforms: The Oklahoma Legislature has a lot to do this year, including establishing a sustainable tax base, providing a long-overdue raise to public school teachers and dealing with a long list of needed reforms to state government. We hope that list doesn’t crowd out another important job: licensing reform [Editorial Board / Tulsa World]. Occupational licensing is a growing barrier to Oklahomans who seek a decent job [OK Policy].

Cornett commends Step Up Oklahoma effort but not tax increase for teacher pay raise: Oklahoma City Mayor Mick Cornett praised Oklahoma business and civic leaders for proposing a revenue and reform package but stopped short of endorsing the tax increases meant to fund a teacher pay raise. Step Up Oklahoma, a coalition of some of the state’s top leaders in the private sector, called on Gov. Mary Fallin and state lawmakers to consider an $800 million package of revenue raising items and a $5,000 pay raise for all teachers. The package also details numerous political and budgetary reform measures [NewsOK].

Bill would reroute TSET funds: A new bill would change how Oklahoma spends its tobacco settlement money, but unlike other proposals, it wouldn’t take money out of the endowment trust. Senate Bill 1149 would let voters decide whether the state should divert any new tobacco payments away from the Tobacco Endowment Settlement Trust and use the money to pay for health personnel in schools and mental health services. It would also restructure how officials spend the money that already exists in the fund [Journal Record].

Tulsa police say they won’t meet deadline for audit of rape kits: The Sex Crimes Unit at the Tulsa Police Department says the department likely won’t meet Oklahoma Gov. Mary Fallin’s extended deadline to compile an audit of untested rape kits. Sgt. Jillian Phippen told the Tulsa World that the state isn’t offering funding to carry out the audit and that the department doesn’t have the manpower to complete it in the allotted time frame [AP].

Quote of the Day

“As our state continues suffering the effects of an unprecedented teacher shortage, Oklahoma cannot afford to ignore the results of this survey. Pay is no cure-all to staving off this shortage, but without regionally competitive compensation, we are trying to win a home run contest with one arm held behind our back.”

– State Superintendent Joy Hofmeister, commenting on a survey that showed that 48 percent of former teachers chose low pay as the most important factor in quitting the profession (Source)

Number of the Day

Number of domestic abuse-related murders in Oklahoma in 2016, 22.6% of all murders in the state that year

Public Schools Must Address Disparities in Discipline Rates: Last year, students at New York City public schools missed tens of thousands of school days due to suspensions. These students were not sick or skipping. Through the overuse of suspensions and expulsions, U.S. public schools fail to serve large segments of historically disadvantaged students. Policymakers must focus on ensuring that public schools fairly serve all the students entrusted to them [Center for American Progress].