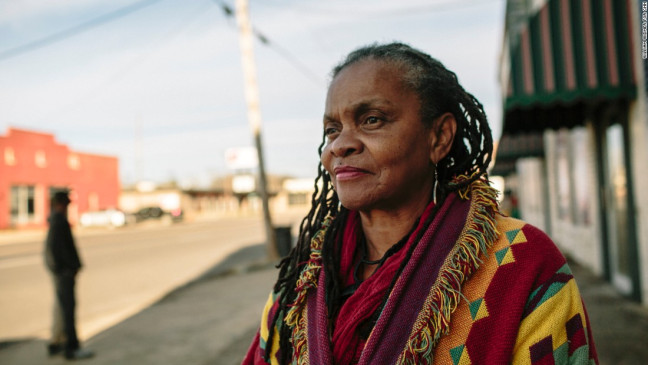 Rose Sanders is the Co-Founder and Coordinator of the Vote or Die Campaignin Alabama.  She spoke with Roland Martin on “NewsOne Now” on TV ONE, Wednesday, Dec. 13th, 2017 about the grass roots organizing effort that she and her organization engaged in to turn out the African American vote for Doug Jones (D) and to stop Judge Roy Moore (R) in the U.S. Senate Special Election in Alabama.  She told Roland Martin about how she was threatened with death for organizing African Americans to vote not in 1965 but in 2017.  Find out what happened with the Deputies showed up.  If the African American vote didn’t matter why was there so much voter intimidation and voter suppression that took place?

The Senate election in Alabama on Tuesday is not just about the choice between Doug Jones and Roy Moore. It’s also about a voter suppression campaign that may well sway the result of a close race.

In 2011, Alabama lawmakers passed a photo ID law, ostensibly to combat voter fraud. But “voter impersonation” at polling places virtually never happens. The truth is that the lawmakers wanted to keep black and Latino voters from the ballot box. We know this because they’ve always been clear about their intentions.

A state senator who had tried for over a decade to get the bill into law, told The Huntsville Times that a photo ID law would undermine Alabama’s “black power structure.” In The Montgomery Advertiser, he said that the absence of an ID law “benefits black elected leaders.”

I met Rose Sanders in October 2017 in Philadelphia at the 20th Anniversary of The Million Woman March.  She is 72 years young and she is the wrong Sista to mess with.

Michael Imhotep is a talk show host, researcher, lecturer, writer and founder of The African History Network.  He is the host of The African History Network Show on 910 AM Superstation Detroit WFDF on Sundays 9pm-11pm EST and on BlogTalkRadio on Thursdays, 8pm-11pm.  Visit his websitewww.AfricanHistoryNetwork.com for more information about his lectures, DVDs, our history and podcasts of the show.

You can follow him on Twitter, Facebook, Instagram, Periscope and Youtube @MichaelImhotep and his Facebook FanPage, “The African History Network”.  He is available for interviews and lectures.  He is a strong advocate of African Americans reclaiming their history, culture and controlling the economics, education and politics in our community. He is featured in the documentary “Elementary Genocide 3: Academic Holocaust”, the documentary series “Black Friday: What Legacy Will You Leave” which deals with African Americans controlling our $1.2 Trillion economy and creating generational wealth and “Resurrecting Black Wall Street: The Blueprint” from Your Black World Films.  Visit www.AfricanHistoryNetwork.com for more information and DVDs podcasts and Online Classes from Michael Imhotep.